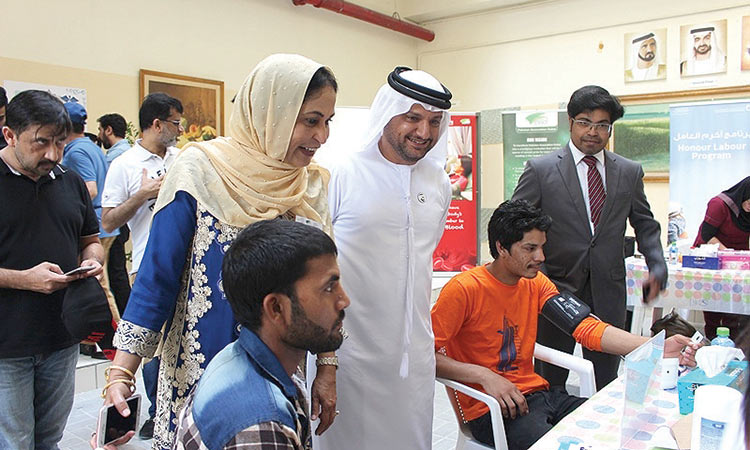 Officials at the health awareness camp for labourers.

Over 400 labourers have been provided a number of free medical tests as part of the World Labour Day celebration by the Media Wing of Pakistan Association Dubai (PAD).

On the occasion of World Labour Day, the PAD organised a health awareness camp at the Align Labour Camp, Jebel Ali, Dubai.

It was part of social responsibility and welfare activities which create health awareness and motivate blue-collar workers to adopt healthy habits. The tagline of the activity was “Honour Labour.” More than 400 labourers were screened during the health camp for basic health checks like blood pressure, blood sugar, cholesterol and BMI, dental and eye checks. Health awareness lectures on diabetes, hypertension, hand hygiene, oral hygiene and quitting smoking were given by health professionals and free consultation provided by the doctors.

Dr Omar Al Muthanna – CEO Community Development Authority (CDA)  was the chief guest of the occasion, he witnessed the activity and appreciated the Medical wing of Pakistan Association for organising health awareness camp in connection with the World labour Day. He also praised the initiatives taken by Pakistan Association Dubai towards community welfare.

Sauat Saqib, Welfare Counsellor, Pakistan Consulate in Dubai was guest of honour at the occasion and praised the initiative of the PAD. She said Pakistan Association Dubai is an exceptional role model for all other community organisations to follow footprints of social welfare initiatives.

Dr.Nighat Aftab- President Medical wing highlighted the importance of these camps which the association has been doing as part of the “Honour Labour” initiative taken by the community Development Authority. She hoped that “Pakistan Medical Centre” will be completed soon which will serve as a non for profit healthcare facility for the community.

The awareness drive was supported by Mediclinic , Northwest Clinic, Zia Medical Center and Super Vision Optical  of the activity. Gifts hamper were also distributed among the blue collar workers at the occasion. The PAD also encouraged community members to raise funds to ‘release a prisoner’ by paying their fines and buying a ticket for those who completed their terms.

The PAD through its community support have been helping such inmates during the Ramadan to pay their minor fines and arrange air tickets.