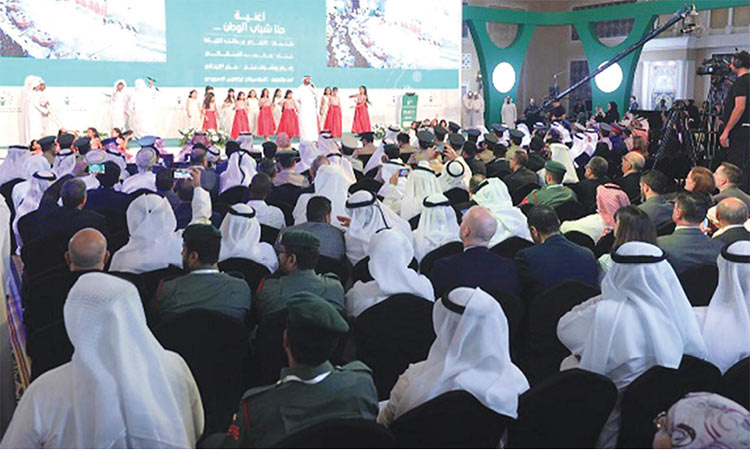 The 14th edition of Hemaya International Forum opened on Sunday.

The two-day forum at Madinat Jumeirah Conference and Events Center discusses the role of security, education and research institutions in combating drugs and psychoactive substances under the theme “Learn to Protect.”

Dr Ali Wardak, Professor of Criminology, School of Humanities and Social Sciences, University of South Wales focused his attention on “Opium Production and Trafficking: Gaps in Research and Academic Knowledge.”

“Afghanistan is the source of over 90 per cent of world opium supply. The country produced very little before the Afghan war that started in 1979,” he said, adding that one of the major solutions is global collaboration in preventing wars.

“For example, Afghan opium worth $1.4 billion rises to $4.1 billion after reaching Europe. There is a knowledge gap on how opium travels about 6, 000 miles via the eight counties and how proceeds are laundered,” he noted.

Expert Mustafa Erten, from United Nations Office on Drugs and Crime said, “There is a need for constant upgrade of skills for cops to be competent, efficient and consistent. The biggest resource in combating drugs is the human one.”

“In order to effectively root out illicit drug trafficking and the people behind this activity, cooperation between different entities locally and internationally in a transparent manner is extremely important.”

He further commented, “Educational institutions need to embrace new technologies and familiarise students with latest tools and techniques that are helpful in preventing drug dealers and their malpractices.” On his part, David Robert Richards, CEO of Brynawel Drugs & Alcohol Rehabilitation – UK, said, “In a world in which we face a common threat from drug abuse and addiction, it is vital that we learn and share our learning,”

The Director General of Community Development Authority Ahmed Julfar said, “We cannot ignore addiction by isolating addicts. Recovery is not a dream nor a difficult task to reach as long as there are necessary factors.”

Dr Amr Osman, Assistant Minister of Social Solidarity – General Manager of Fund for Drug Control and Treatment of Addiction said, “85per cent of drug abusers live with families. Here comes the family on the front line.”

Dr Ali Wardak added, “No nation can deal effectively with this multidimensional challenge. Drug abuse is a global problem motivated by the greed of Transnational Organised Crime networks. Stakeholders need to coordinate.”

The Head of Addiction and Subsequent Care Department, at Dubai Police, Lieutenant Khawla Jaber, who delivered Dubai Police Command’s message pointed to statistics in a report released by the United Nations.

“More than 739 new substances were monitored from 2009 to 2016 and those substances are in an increased demand. Most worrying is that the age of abuse has rapidly declined to a younger age group between 11 and 18.”

“Tackling a criminal system that has the capacity to employ scientific research and technological innovation in achieving their criminal goals necessitates counter measures, thus comes the launch of Hemaya Smart App.”

“It can help detect drug addicts and show locations of rehabilitation centres, in addition to highlighting the role of the family and parents in raising awareness about dangers of drug abuse and providing specialised consultations.”