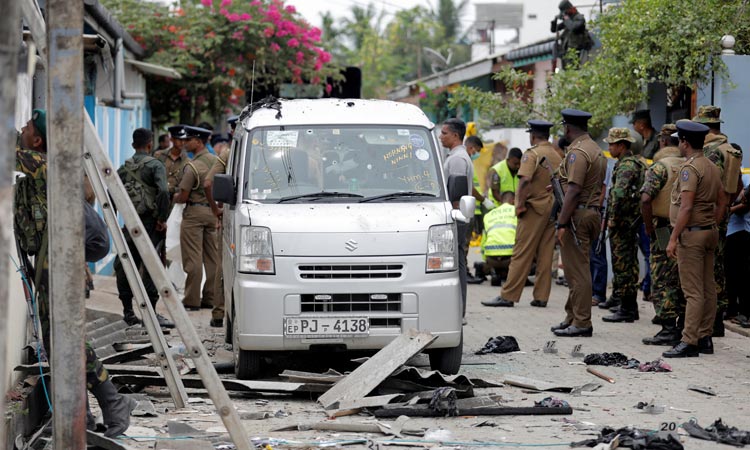 Security personnel are seen at the site of an overnight gun battle in Kalmunai, Sri Lanka. Dinuka Liyanawatte/Reuters

The bodies of 15 people, including six children, were discovered at the site of a fierce overnight gun battle on the east coast of Sri Lanka, a military spokesman said on Saturday, six days after suicide bombers killed more than 250 people on the island.

A police spokesman said that three suspected suicide bombers were among the 15 dead after the shootout.

Daesh claimed responsibility for last Sunday's attacks, all but one of which were in the capital, Colombo. The government has said they were carried out by nine well-educated Sri Lankans, eight of whom have been identified.

Authorities have warned there could be more attacks targeting religious centres following the bombings, which shattered the relative calm that Buddhist-majority Sri Lanka had enjoyed since a civil war against mostly-Hindu ethnic Tamil separatists ended a decade ago. 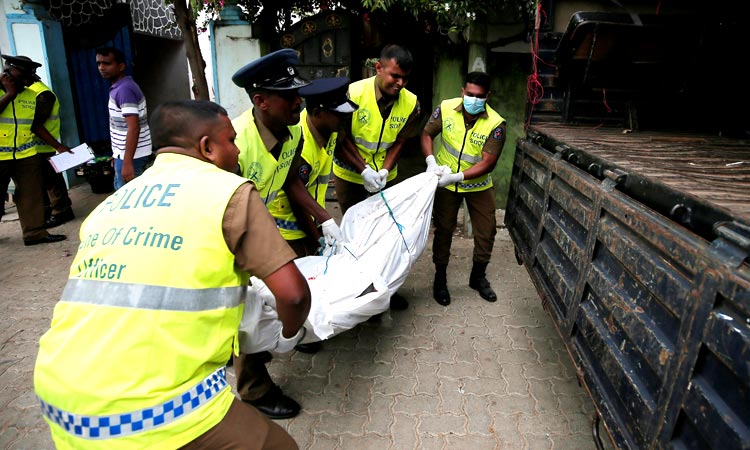 Police officers carry the body at the site of an overnight gun battle in Kalmunai, Sri Lanka, April 27, 2019. Dinuka Liyanawatte/Reuters

The US State Department, warning that terrorist groups were continuing to plot attacks, urged citizens to reconsider travel to Sri Lanka.

It ordered the departure from the country of all school-age family members of US government employees and also authorised non-emergency employees to leave, it said in a statement.

Britain has also warned its nationals to avoid travelling to Sri Lanka unless absolutely necessary.

"There is a close relationship between religious extremism and illegal drug trade. Our efforts to eradicate the drugs menace from the country could have advanced the ISIS attack.

Bomb-making materials, dozens of gelignite sticks and thousands of ball bearings were found in a search of a separate house in the same area along with Daesh banners and uniforms, the military said.

Police said on Friday they were trying to track down 140 people they believe have links with Daesh.

Sri Lanka's president said on Friday some Sri Lankan youths had been involved with Daesh since 2013 and that there were links between drug trafficking and Daesh.

"There is a close relationship between religious extremism and illegal drug trade. Our efforts to eradicate the drugs menace from the country could have advanced the ISIS attack," said President Maithripala Sirisena.

Nearly 10,000 soldiers have been deployed across the Indian Ocean island state to carry out searches and provide security for religious centres, the military said.

Authorities have so far focused their investigations on international links to two domestic groups they believe carried out the attacks, NTJ and Jammiyathul Millathu Ibrahim.

This photo shows explosive materials at the site of an overnight gun battle in Sri Lanka on Saturday. Dinuka Liyanawatte/Reuters

Backpacks, explosive materials and other items are seen at the site of an overnight gun battle in Kalmunai. Dinuka Liyanawatte/Reuters

Soldiers stand guard as authorities started clearing the debris from inside of the damaged St. Anthony's Church in Colombo on Saturday.

Soldiers stand guard during a curfew in Kalmunai. Dinuka Liyanawatte/Reuters

They have detained at least 76 people, including foreigners from Syria and Egypt, in their investigations so far. Twenty were arrested in the past 24 hours alone, they said.

In a separate raid on a mosque in Colombo, a suspect was arrested and a haul of 40 swords and kris knives were seized from under the bed of the chief cleric, police said.

Daesh provided no evidence to back its claim that it was behind last Sunday's blasts. If true, it would be one of the worst attacks carried out by the group outside Iraq and Syria.

The extremist group released a video on Tuesday showing eight men, all but one with their faces covered, standing under a black Daesh flag and declaring their loyalty to its leader, Abu Bakr Al-Baghdadi.

Muslims were urged to pray at home on Friday after the State Intelligence Services warned of possible car bomb attacks, amid fears of retaliatory violence. Many have fled their homes amid bomb scares, lockdowns and security sweeps.

Archbishop of Colombo Cardinal Malcolm Ranjith told reporters he had seen an internal security document warning of further attacks on churches and said there would be no Catholic masses this Sunday anywhere on the island.

"Troops retaliated and raided the safe house where a large cache of explosives had been stored.

Officials have acknowledged a major lapse in not widely sharing intelligence warnings from India of possible attacks.

President Sirisena said on Friday that top defence and police chiefs had not shared information with him about the impending attacks.

He blamed Prime Minister Ranil Wickremesinghe's government for weakening the intelligence system by focusing on prosecution of military officers over alleged war crimes during a decades-long civil war with Tamil separatists that ended in 2009.

Sirisena fired Wickremesinghe in October over political differences, only to reinstate him weeks later under pressure from the Supreme Court. But a rift remains between factions aligned to the prime minister and president, sources say.

Sri Lanka's 22 million people include minority Christians, Muslims and Hindus. Until now, Christians had largely managed to avoid the worst of the island's conflict and communal tensions.

Most of the victims of the Easter Sunday suicide bombings were Sri Lankans, although authorities said at least 40 foreigners were also killed, many of them tourists sitting down to breakfast at top-end hotels when the bombers struck.