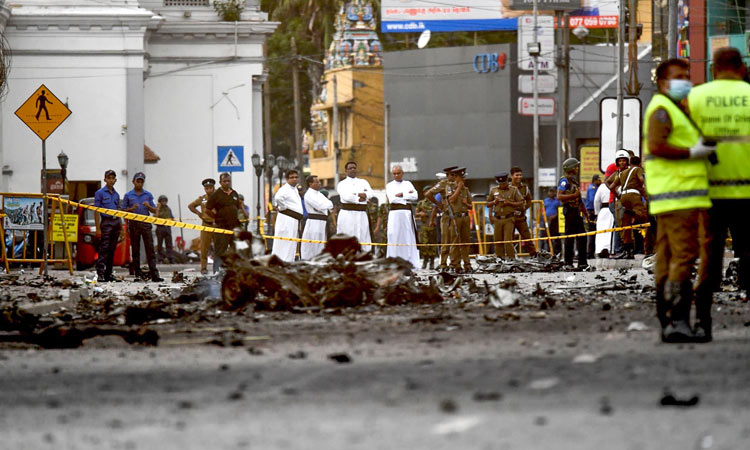 Sri Lankan priests and policemen look at the debris of a car after it explodes on Monday. Jewel Samad/AFP

Sri Lankan police detained a Syrian among 40 people being questioned about the Easter on Sunday attacks on churches and hotels, government and military sources said on Tuesday, as the toll from the coordinated bomb attacks rose to 321.

However, the focus of suspicion is falling on militants with links to foreign groups. US intelligence sources said the attacks bore some of the hallmarks of the Daesh extremist group.

Tuesday was declared a national day of mourning and the funerals of some of the victims were held as pressure mounted on the government over why effective action had not been taken in response to a warning this month about a possible attack on churches by a little-known domestic militant group.

Police said the number of people arrested since Sunday had risen to 40, most of them Sri Lankans. The investigation of those detainees had led to the Syrian, three government and military sources told Reuters.

"He was arrested after the interrogation of local suspects," one of the sources said.

The first six attacks — on three churches and three luxury hotels - came within 20 minutes on Sunday morning during Easter services and as hotels served breakfast.

Two more explosions - at a down-market hotel and a house in a suburb of the capital, Colombo - came in the early afternoon.

Most of the dead and wounded were Sri Lankans, although government officials said 38 foreigners were killed. That included British, U.S., Australian, Turkish, Indian, Chinese, Danish, Dutch and Portuguese nationals.