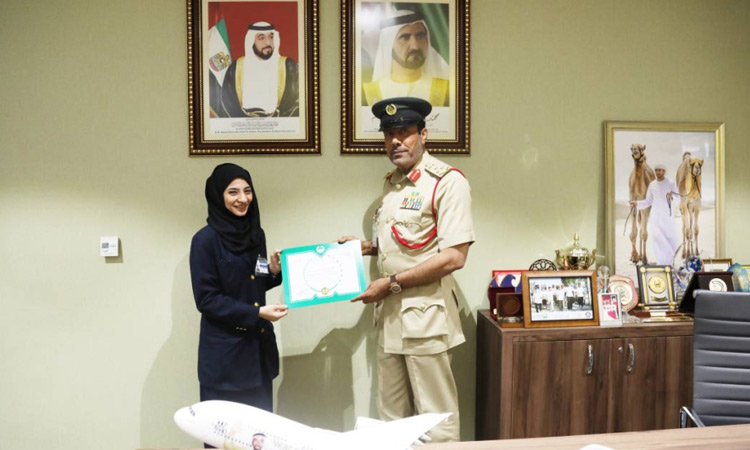 Hamza M Sengendo, Staff Reporter
An airport police female inspector helped an Indian woman deliver inside the Dubai International Airport in a move that saved her and her baby, police announced on Saturday.
The General Department of Airports Security Director Brigadier Ali Atiq Bin Lahej honoured Corporal Hanan Hussein Mohammed who works in Terminal 2 under the department, for her humanitarian role and good conduct.

Brig. Bin Lahej recognised her efforts in dealing with the emergency case of the Indian passenger who upon arrival at the Dubai International Airport’s inspection areas found herself amidst pains of labour.

She could not be transferred to another place because of the severity and seriousness of her health status. Inspector Hanan saw no option but to help her and ensure her safety and that of the unborn child.

She took her inside an inspection room and provided her with assistance in a professional manner. For her part, Hanan said the passenger’s health status made it too difficult to move her out of the airport.

To save her life she had to rush her to the inspection room to deliver. “The situation became more difficult after the mother delivered the baby boy. The baby was in critical condition and had breathing difficulties.

“I had to perform CPR (Cardiopulmonary resuscitation) on him, as per the training I earlier received. The procedures I took included applying pressure to certain areas to restore his breathing,” explained Hanan.

An ambulance employee arrived and helped take care of the child and mother. “Their safety was a great challenge and top priority. It required every effort to contain the situation and save both,” Hanan stressed.

The next day the director of airports security commissioned a delegation of policewomen to visit them at Latifa Hospital and provide necessary assistance. The visit delighted the mother and family at large.

Brigadier Bin Lahej said the comprehensive training the department offers to its personnel helps them cope with emergency situations and circumstances that may occur at any time with passengers or employees.

“In line with directives of the Dubai Police General Command, the department is keen to educate employees on humanitarian matters besides their security duties. This reflected positively on Hanan’s good conduct,” he stressed.