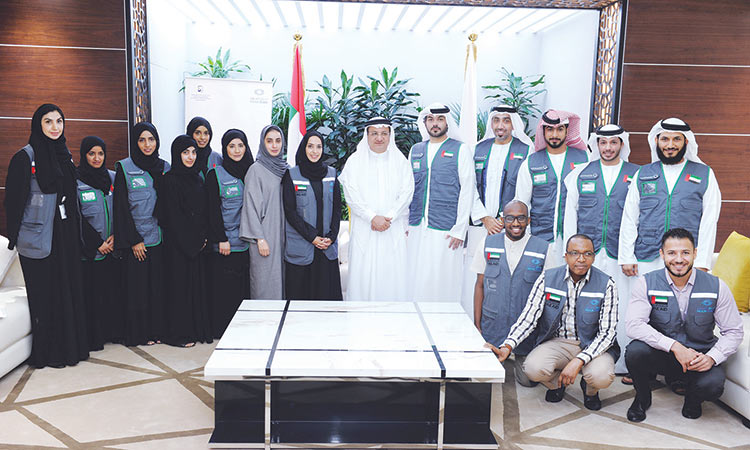 To date, Noor Dubai Foundation has organised camps in 32 cities in 17 countries where 263,438 individuals have been screened, 26,600 surgeries have been performed and 62,034 glasses provided.

Noor Dubai Foundation has organised its first Mobile Eye Camp for the year 2019 at the Narail, Khulna District in Bangladesh, where around 5,000 people benefited from the foundation’s activities.

During this mobile camp, around 5,000 people were screened, around 600 surgeries were conducted and 2,218 spectacles were distributed.

Since the launch of the Mobile Eye Camp programme in 2008, Noor Dubai has organised six Mobile Eye Camps in Bangladesh, where they have provided medical and diagnostic services to over 35,000 patients, conducted over 4,000 surgeries, and distributed 11,000 eye glasses.

Al Qutami stressed during the award ceremony that volunteering is deeply rooted in UAE’s society and foundation by the late Sheikh Zayed Bin Sultan Al Nahyan, who was know for his philanthropic work that has touched the lives of many across the world.

Al Qutami said that Noor Dubai Foundation has succeeded in establishing itself as a leading humanitarian organization worldwide as more than 27 million individuals from all over Africa and Asia have benefited from the free treatment and preventive programmes (which includes provision of surgeries, eyeglasses, and medication) since its inception in 2008.

He added that the humanitarian work of the UAE and nationals who take part in the country’s philanthropic work are a source of pride to every Emirati. He commended DEWA employees who comprised of young Emiratis who supported the foundation’s humanitarian work and also built a school during their stay at Bangladesh.

Al Qutami concluded by commending HE Matar Humaid Al Tayer, Chairman of DEWA and HE Saeed Mohammed Al Tayer, Managing Director and CEO of DEWA for supporting the Dewa team.

To date, Noor Dubai Foundation has organised camps in 32 cities in 17 countries where 263,438 individuals have been screened, 26,600 surgeries have been performed and 62,034 glasses provided.

Noor Dubai Foundation is a UAE based charity focused on the prevention of blindness and visual impairment globally. It was launched as an initiative in 2008 by His Highness Shaikh Mohammad Bin Rashid Al Maktoum, Vice-President and Prime Minister of the UAE and Ruler of Dubai and was later established as a Non-Governmental Organization (NGO) by Law in October 2010. Over 27 million individuals from all over Africa and Asia have benefited from the Foundation’s free treatment and preventive programs which includes provision of eye glasses and medication. As a member of the International Agency for the Prevention of Blindness (IAPB) and the Mohammed Bin Rashid Global Initiatives foundation, Noor Dubai continues to strive towards fulfilling the Vision 2020 initiative of a world free from preventable forms of blindness.

The Dubai Health Authority (DHA) was created, in June 2007, by Law 13 issued by His Highness Sheikh Mohammed bin Rashid Al Maktoum, Vice President and Prime Minister of the UAE, Ruler of Dubai, with an expanded vision to include strategic oversight for the complete health sector in Dubai and enhance private sector engagement.

Prior to the establishment of the DHA, the Department of Health and Medical Services, which was established in 1973, was the functioning authority that almost exclusively focused on health service delivery.

In May 2018, H.H Sheikh Mohammed, issued Law No. (6) Of 2018 of the DHA. The new Law further enables the DHA to achieve its objectives including regulating medical services in Dubai, enhancing competiveness and transparency, improving medical services and products based on international best practices and achieving the sector’s objectives according to approved strategic plans.