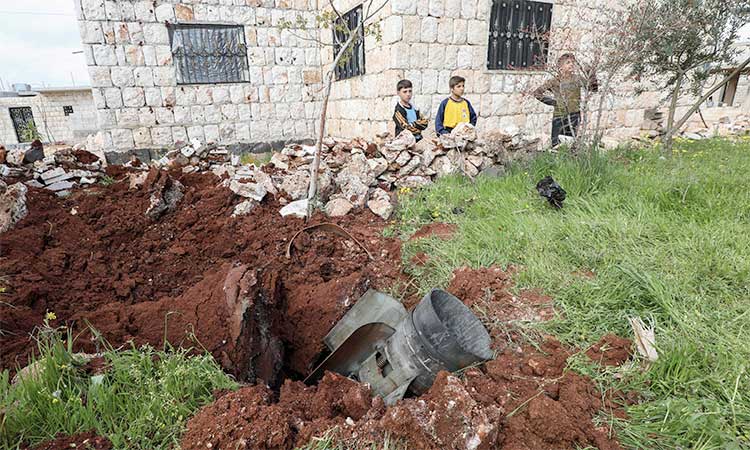 Syrian boys look at a bomb crater next to a house in the northwestern province of Idlib on Thursday. Agence France-Presse

BEIRUT: Heavy bombardment by the Syrian army of the militant-controlled Idlib region has killed 22 civilians, a monitor said on Thursday, the latest violence to threaten a seven-month-old truce.

The ceasefire was brokered by the main foreign backers of the warring parties in September to head off a government offensive that prompted UN warnings of humanitarian disaster for the region’s three million residents.

But since the region was overrun by the Hayat Tahrir Al-Sham alliance led by former Al Qaeda fighters in January, the fragile truce has come under mounting assault.

Syrian Foreign Minister Walid Muallem accused Turkey, which signed the September deal on behalf of the rebels, of failing to honour its commitments and warned that his government’s patience was running out.

In the latest flare-up, army artillery and rocket fire on the Idlib towns of Kafrnabel and Maaret Al Noman killed 13 people on Thursday, the Syrian Observatory for Human Rights said.

It came after shelling of adjacent militant-held areas of Hama and Aleppo provinces killed nine people late on Wednesday, the Britain-based watchdog said.

The UN humanitarian office said that the escalating violence had already killed 90 civilians in the Idlib region in March, nearly half of them children.

More than 86,500 people fled their homes in February and March as a result of the escalation, it added.

The UN expressed concern over “increased shelling along front lines, an intensification of air strikes and a growing number of attacks involving improvised explosive devices in urban areas.” The Syrian foreign minister said his government was growing impatient to recapture Idlib, the last region outside its control apart from the Kurdish-held north and northeast where Washington retains a troop presence.

Muallem said Turkey had failed to ensure the withdrawal of extremist forces from a planned buffer zone along the front line as stipulated by the truce agreed in the Russian Black Sea resort of Sochi.

“It is known that Turkey is responsible for a delay in implementing” the deal, he said at a joint press conference with his Venezuelan counterpart Jorge Arreaza.

“Honestly, we are still waiting for the Sochi deal to be implemented but our patience has its limits and we must liberate this land.

“We are losing patience,” he warned.

More than half of the population of the Idlib region have already fled government offensives on other rebel-held regions of Syria.

Many live in tent cities where they are dependent on humanitarian aid and deeply vulnerable to a resurgence of all-out conflict.

Work between Turkey and the United States to implement an agreement over the Syrian town of Manbij is proceeding more slowly than desired, Turkish military sources said.

Turkey is making efforts to speed up the process, the sources said, referring to an agreement between the Nato allies to a complete withdrawal of the Kurdish YPG militia from the town. Ankara considers the YPG a terrorist organisation. Turkey and Russia have conducted three coordinated patrols in the mainly Kurdish-controlled northern Syrian region of Tel Rifaat and plan to continue the patrols, the sources said.

Amman on Thursday called for the release of 30 Jordanians detained in Syria without reason, the kingdom’s foreign ministry said, adding that it had summoned the Syrian embassy’s charge d’affaires. Aymen Alloush was summoned “for the fourth time in a row to demand the release of 30 Jordanian citizens... detained without clear reasons”, a ministry spokesman Sufyan Al Qudah said in a statement.

All of them had crossed into the conflict-wracked country “for tourism or a visit” after Syria and Jordan reopened their shared border in October, he added.

Amman has repeatedly contacted Syrian authorities “through diplomatic channels” to demand their release, Qudah said, adding that Damascus had failed to clearly respond.

The main crossing point between Syria and Jordan was reopened following an agreement between Amman and Damascus. 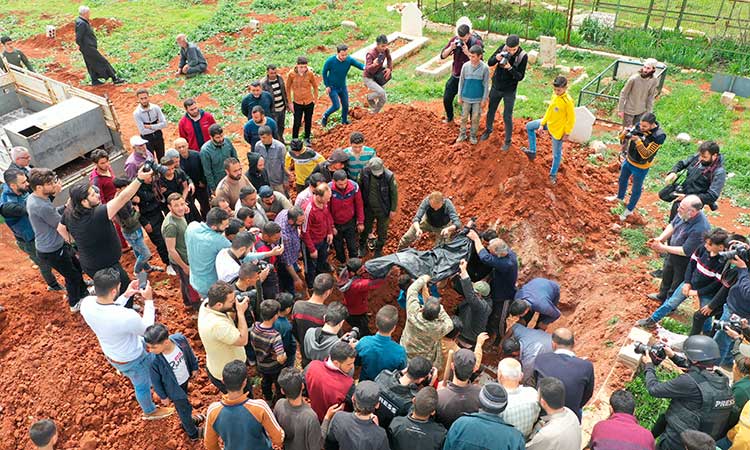 Hajj Ahmed, the principal at Al Amal school, said the attack happened at about 11:15am and that one of the students was in the ninth grade. Another was in the seventh grade and two were in the eighth grade.