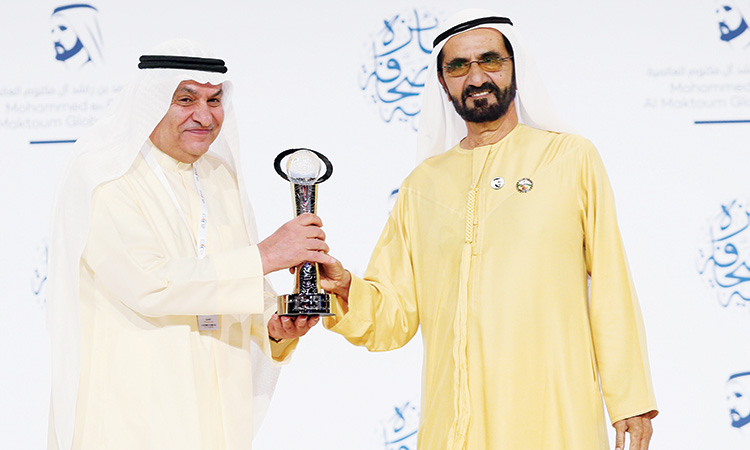 A poem penned by Sheikh Mohammed about the impact of war and terrorism in the region as well as in other parts of the world was another highlight of the ceremony. The poem was rendered by popular Arab singer Latifa.

The award ceremony, attended by a large number of prominent media figures and Arab journalists, started with a short video about recent key events that were covered by Arab media.

Press Interview Award was presented to Radwan Mabshour of ‘Al Ayam’ newspaper of Morocco. Sports Journalism Award was given to Emran Mohammed of ‘Al Ittihad’ newspaper.

Photojournalism Award was given to Ibrahim Abu Mustapha of Reuters.

Award for Outstanding Cartoonist was presented to Yassir Al Ahmed of ‘Makkah’ newspaper from Saudi Arabia.

Earlier, speaking at a session entitled ‘The Age of Fabrications’, fact-checking reporter Daniel Funke said that the Fact-checking journalists throughout the world have become a primary defence against fakery and are playing a significant role in debunking fake news on large social media platforms.

Funke, who works for the International Fact-Checking Network at Poynter Institute for Media Studies, spoke about the proliferation of misinformation in our world today and what can be done to combat it.

“We can all be fact-checkers,” Funke told the audience, which included journalists from different media organisations. “Journalism is the primary way we can fight bad information online.”

“Fake news is not a great term to describe this phenomenon. It really doesn’t mean anything anymore, because it has become greatly politicised,» Funke added.

Defining the three types of ‘information disorder’, Funke said, “The first type is misinformation, and this is the type of information that is false, but not created with the intention of causing harm. It’s not always clear why it has been shared. On the other side, there is disinformation, which does imply intent. It is demonstrably false content that is trying to achieve a goal. It could be to sway elections or to get someone to share something, or even make money on a website. The third type, is mal-information, which includes hate speech and targeted harassment. It might include elements of false information and misinformation, but is not necessarily false.”

Funke explained that within misinformation, there are also different types, such as satire and parody, which sometimes people do not understand and can mistake for real news.