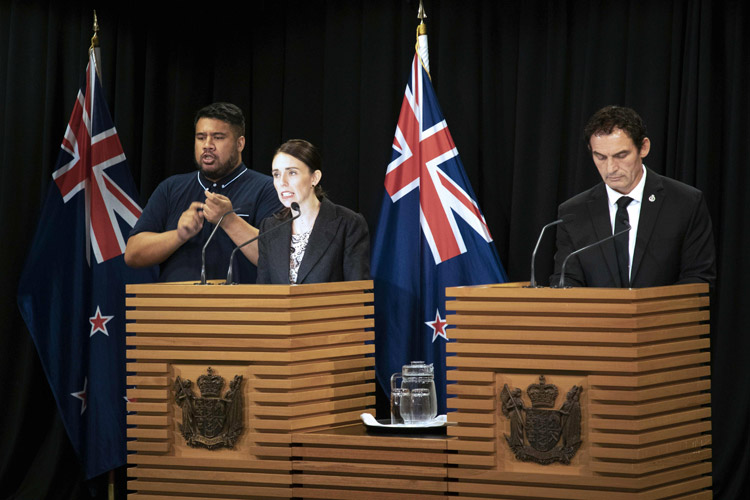 The move comes less than a week after a white supremacist rampaged through two mosques killing 50 people as they prayed, sparking global revulsion and national outrage.

“Every semi-automatic weapon used in the terrorist attack on Friday will be banned in this country,” Ardern told a press conference.

Ardern added that high-capacity magazines and devices similar to bump stocks — which can make rifles fire faster — will also be outlawed.

Legislation enacting the restriction will be introduced in parliament when it meets in early April, but an interim measure means a ban on new purchases has — for practical purposes — already been enacted.

Reaction in the still-shocked country was positive.

“It’s a good thing, why would we need to have guns like this in our houses?” Kawthar Abulaban, 54, who survived the shooting at Al Noor mosque told AFP.

“The semi-automatics, why would you keep that inside your house, it’s not right.”

The scale of the attack has caused a worldwide outcry, heightened by alleged shooter Brenton Tarrant’s use of social media to livestream the carnage.

For a second straight day, hundreds of mourners gathered under grey skies in the shattered city to lay to rest more of the dead, including a local convert to Islam and an elderly man who died trying to greet his white supremacist killer.

Amid the prayers and sobs there were Muslims, non-Muslims, schoolchildren and even at one point a phalanx of bikers.

Pupils wept and embraced as they said goodbye to 14-year-old Sayyad Milne and 24-year-old Tariq Omar.

Sayyad’s father John Milne said his son was gunned down while praying at Al Noor, the first of the two mosques attacked.

Milne, who was at Thursday’s funeral, had previously described his son as “a beautiful boy” and “my special little one” who longed to play for Manchester United.

Mourners arrived at the cemetery in long lines, schoolgirls struggling to keep scarves on their heads in the windy conditions.

Many came from Cashmere High School, which Sayyad attended alongside fellow victim Hamza Mustafa, a Syrian refugee who was buried Wednesday.

A mournful cry of “Allahu Akbar” over a loudspeaker signalled that the service had begun. Mourners prayed before lifting the two victims above their heads and carrying them to their graves.

Many shed tears, and held one another for support, as they left the cemetery following the ceremonies.

Local media reported that he was dropped off at the Al Noor mosque on the day of the killings by his mother, who survived the attack because she was trying to find a parking space when the gunman launched his assault.

“He was one of those people that everyone knew,” Cashmere pupil Bailey Jordan, 15, told AFP as he left the funeral, which he described as “really heartfelt...a tough time for everyone.”

Christchurch United Academy Director Colin Williamson described Omar as “a beautiful human being with a tremendous heart and love for coaching”.

One neighbour of the Milne family said the service was “very respectful, very moving” and attended by Muslims and non-Muslims alike.

She said she looked across the cemetery to see that so many more funerals would need to be held in the coming days.

“What struck me was the number of graves waiting... and the area they took up,” the woman, who declined to be named, told AFP.

In a rambling “manifesto,” Tarrant said he was motivated partly by a desire to stoke religious conflict between Islam and the West.

But people of all faiths in Christchurch have come together to mourn and denounce the killings, with the city festooned in flowers, cards and tributes.

New Zealanders had already begun answering government appeals to hand in their weapons, prompting a barrage of derogatory messages online — most apparently from the US, where the pro-gun lobby is powerful and vociferous.

Families of the victims had faced days of anxious waiting to receive the bodies of their loved ones as criminal investigators and pathologists rushed to formally identify each person.

It was only on Wednesday that funerals could begin, including a father and son who had arrived as refugees from the maelstrom of Syria last year.