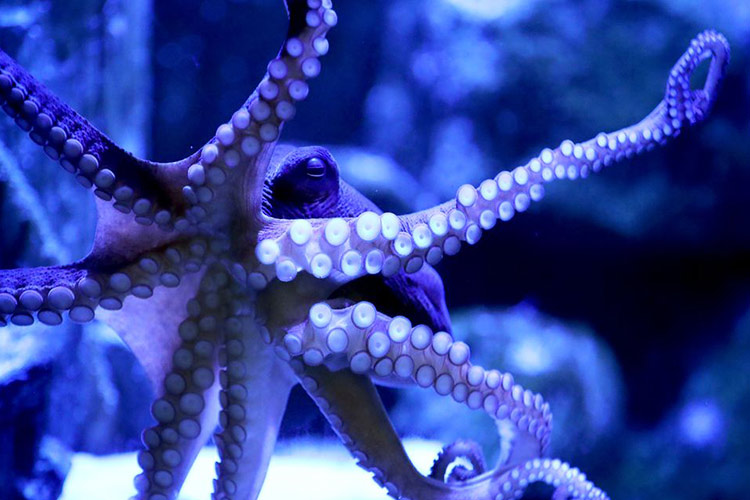 Life under water is a whole different world altogether. Particularly if you are scuba diving. You get to see the manta rays, sea turtles, dolphins, the list goes on. Among the best dive sights are the Galapagos Islands in the Pacific Ocean, Florida, Thailand, Mexico, Bahamas and even the Red Sea in Egypt, which has over 1,000 species of fish.

The sights are simply awesome, to use a clichéd teen expression. But this view catches you with the tentacles of absolute bamboozlement: the sight of an octopus.

At least that’s what happened to British Columbia scuba diver Andrea Humphreys when she came up close and personal with a giant Pacific octopus. Her new acquaintance greeted her more like a long-lost pal, with extended arms, then a full-body hug.

The schoolteacher’s video of the uncommon ‘faceoff’ with the creature, which can look scary to the common man, took place off Vancouver Island in Canada, in three-metre-deep water.

Humphreys has been diving for 12 years, but she never felt or saw anything like this. It was an unforgettable experience for the teacher, who has done more than 675 dives around the world.

The recent encounter happened very quickly, within three minutes of getting into the water.

She estimated its size at more than three metres, tentacle to tentacle, with a body bigger than a basketball.

It greeted Humphreys with its body and tentacles fully engulfing her camera, according to a report in a section of the Canadian media.

Her camera then seemed to explore the inside world of her mouth, which looked as though it was lined with what looked like small illuminated lamps, the ones found during Diwali, the Indian Festival of Lights.

Its tentacles started feeling her face and then at some point, it crawled on her hips and appeared to be giving her a hug.

Then it was sucking on my lip, squealed Humphreys. She captured the whole interaction on her video, replete with screams of excitement.

The fact that a giant Pacific octopus would come so close to a diver was rather very unusual, she said, adding these creatures are very intelligent.

Humphreys hopes her meeting with the amazing creature highlights how important it is to protect the beauty of the marine environment.

Humphreys plans to visit the site again, to renew their friendship.

Employees who provide a medical report exempting them from taking the vaccine due to an illness or a health condition need not pay for their own tests. In such cases, the employer should cover the costs of the nasal swab test every 14 days.