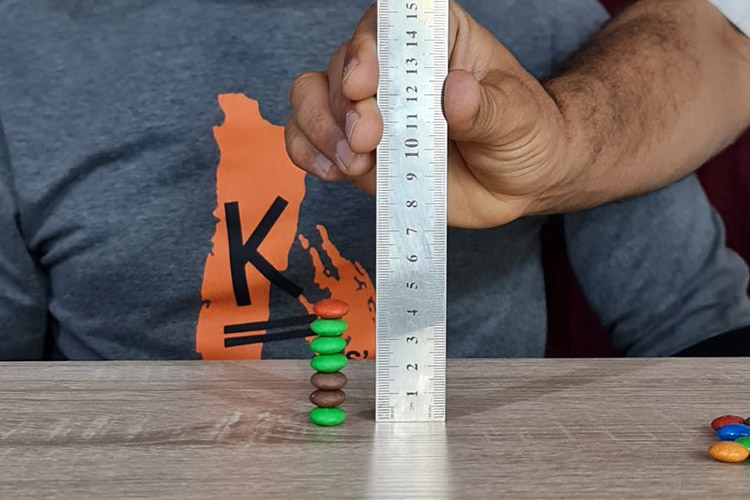 A Guinness staffer measures the height of the stack of M&Ms made by Sadeq.

Over the past couple of years, Guinness World Records witnessed an exceptional interest in the world record title of Tallest stack of M&M's, which has just been topped up by an additional piece to become 7 in total, as achieved by Ibrahim Sadeq, a 29 years old from Iraq.

In a video of unbelievable gravity-defying way, Sadeq was able to stack the 7 chocolate sweets on top of each other in no more than 2 minutes. An attempt that took so much more to be achieved by the previous record holders over the years.

“I am using a mix of mind and body focus but people usually define it as a gravity defying act,” said the Iraqi national from his hometown in city of Nasiriyah, Dhi Qar Governorate in Iraq.

Sadeq is the current record holder for the most eggs balanced on the back of hand, an achievement in which he equalled that of Jack Harris (UK) with a total of 18 eggs.

“It takes extreme patience and dexterity to put an object in a state of equilibrium in an upright position. So, by finding the center of gravity of an object, or its balance point, you are practicing the ‘art of balance’,” added Sadeq. 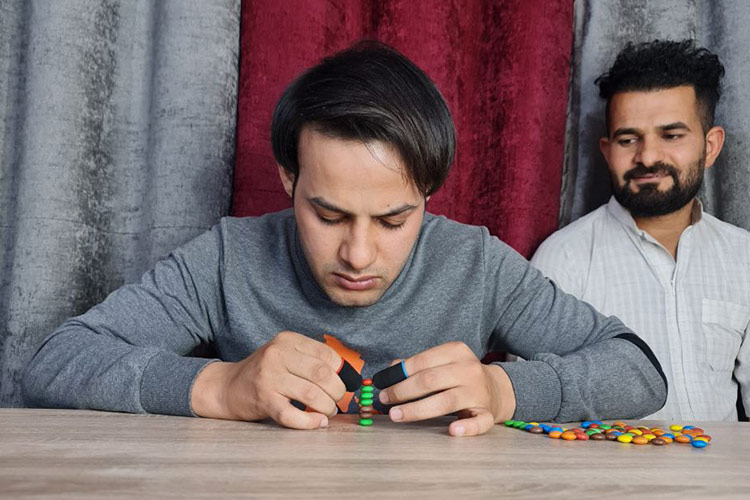 The tallest stack of M&M's® has a long history on Guinness World Records™ systems, and it is getting higher every year. People at home thought such feat is fairly easy to achieve, however, people who actually tried it know it takes months of practice to add one additional piece on the top of that stack.

The title came to light in December 2016 when an Italian man, named Silvio Sabba, managed to balance 4 M&M's® on top of each other. Tonnes of applications were received since then with the aim to break this title, including one in November 2020 by a 22-year-old Brendan Kelbie (Australia) who is a serial record breaker and managed to equal the title with 4 M&Ms®.

Less than 3 months later, during the UK’s third lockdown, a British civil engineer, named Will Cutbill, tried his luck for fun and managed to balance 5 M&Ms® bringing this record title back to the lights. Couple of months later, this was then equalled by Rocco Mercurio in Villa San Giovanni, Italy, until the familiar name of a previous record holder, Brendan Kelbie, had another go on the record title smashing it with a stack of six in total in October 2021, and the rest is history.

Sadeq started balancing objects 6 years ago after he saw videos online of people balancing rocks on a running river.

“I could possibly balance anything, but it gets really tough with light objects or liquids,” said Sadeq.

On his social channels, Sadeq appears standing a chair on one leg, propping two gas canisters on a slanted pipe wrench and balancing an upside-down TV screen on the rim of a Coke bottle.

This has made him a popular entertainer for many followers online, and secured for him multiple live entertainment segments on TV.

“My achievements in Guinness World Records changed my life for the better. The sense of fun and global recognition is exceptional. I now have many friends, which I have never met in person, sharing the same passion I have for this art,” concluded Sadeq.

These kind of ‘balance acts’ gets really competitive and has its own ‘artists’, including one of Sadeq’s fellow Arab Mohammed Muqbel (Yemen) who broke his own title twice for Tallest stack of eggs, which currently stands at 4 in total.

Next time you are munching through a bag of M&M's®, think how higher this stack could get? And maybe give it a try!