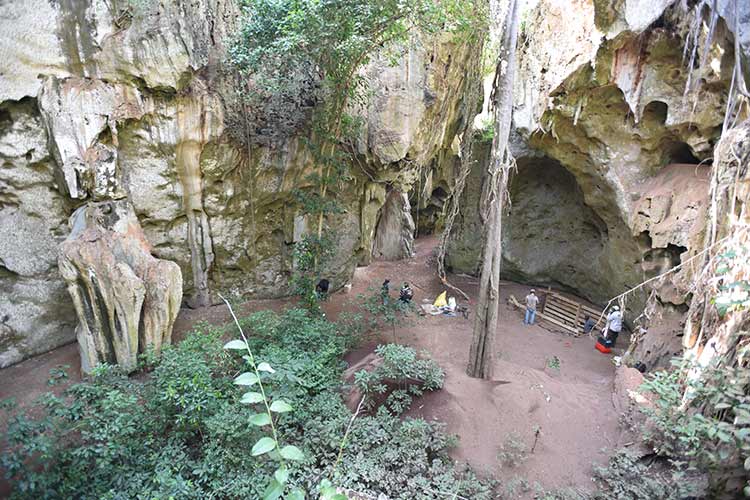 The cave site of Panga ya Saidi, in Kenya's Kilifi County is seen in this undated photograph.

A child no older than three laid to rest sideways in an earthen grave 78,000 years ago, legs carefully tucked up against its tiny chest, is the earliest known human burial in Africa, researchers reported on Wednesday.

Bottling up emotions can affect your health

The sunken pit, in a cave complex along the coast of Kenya, was bereft of ornaments, offerings or ochre-coloured clay carvings found in the region's more recent Stone Age graves, they detailed in the journal Nature.

But "Mtoto" — Swahili for "child" — had been wrapped in a shroud with her or his head resting on what was probably a pillow, "indicating that the community may have undertaken some form of funerary rite", said lead author Maria Martinon-Torres, director of the National Research Centre on Human Evolution, in Burgos, Spain. 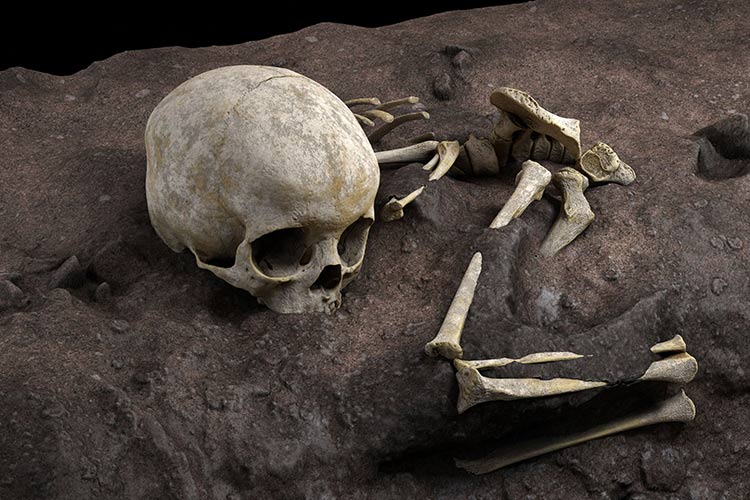 The remains of a child roughly age 3 who lived about 78,000 years ago and was found in a burial pit at a cave site in Kenya.

The extraordinary find highlights the emergence of both complex social behaviour among Homo sapiens, and cultural differences across populations of modern humans in Africa and beyond.

Fragments of the child's bones were dug up at the Panga ya Saidi caves in 2013, but it wasn't until five years later that the shallow, circular grave — three metres below the cave floor — was fully exposed, revealing a tight cluster and decomposed bones.

"At this point, we weren't sure what we had found," said Emmanuel Ndiema of the National museum of Kenya. "The bones were just too delicate to study in the field."

Archaeologists stabilised and plastered them into a bundle and transported them, first to the museum and then to the research centre in Spain. 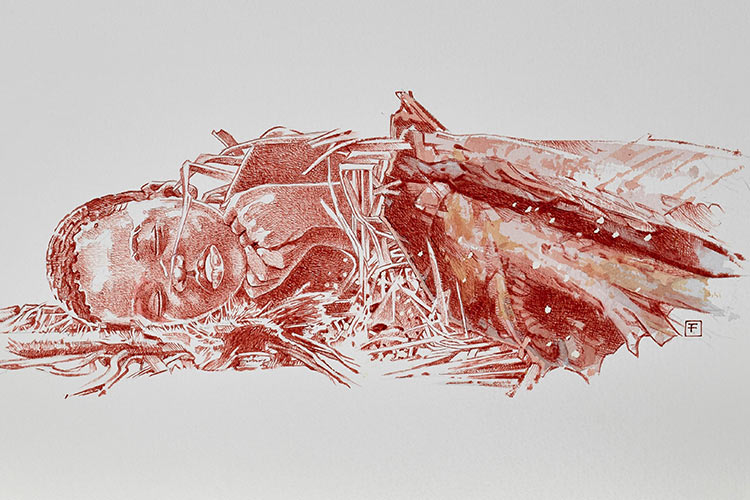 The burial of a young child dubbed "Mtoto." AFP

"We started uncovering parts of the skull and face," Martinon-Torres said.

"The articulation of the spine and the ribs was also astonishingly well preserved, even conserving the curvature of the thorax cage."

Homo sapiens originated in Africa, but little is known about mortuary practices on the continent compared to Europe and the Middle East, where even older human burial sites have been unearthed, including one in Israel thought to be 120,000 years old.

Intriguingly, infant and child burials make up nearly half of all known interments from that time until the end of the Middle Stone Age, about 30,000 years ago.

The same holds for our genetic cousins the Neanderthals, whose ritual burials in Eurasia go back at least a half-a-million years.

"Burials where the body is in a flexed position are very common, it's difficult to know exactly why," said Martinon-Torres. 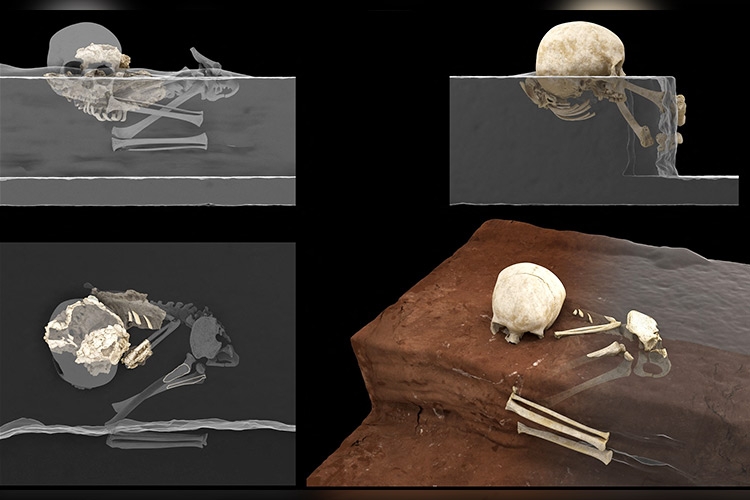 This handout computer-generated image hows the remains of a 3-year-old child named by the scientists "Mtoto." AFP

"Some researchers have argued that it is for practical reasons, to put the bodies in a smaller space, but one can also see it as putting the child in a sleeping position," she continued.

"Being wrapped, while lying in this foetal position, could be somehow a way to transfer some human warmth in such a cold moment."

Or environmental conditions: the ones located so far are bunched in the dry north and temperate southern Africa, climates more favourable to preservation.

Stone Age burial sites often reveal the beginnings of culture, especially when they point to "a departure from purely practical motivations toward a more meaningful treatment of the dead", noted Louse Humphrey, a researcher at the Centre for Human Evolution at the Natural History museum in London.

"Such actions include careful placement of the corpse in the grave to achieve a desired body position or orientation, the wrapping or binding of the body for reasons other than to aid transportation, or the deliberate incorporation of items of value in the grave," she wrote in a commentary, also in Nature.

Mtoto's final resting place fulfilled the first two of these criteria, and possibly the third.

The new finding, along with a child burial site in South Africa dating back nearly as far, "suggest that a tradition of symbolically significant burials, at least for the very young, might have been culturally embedded in parts of Africa in the later part of the Middle Stone Age," she wrote. 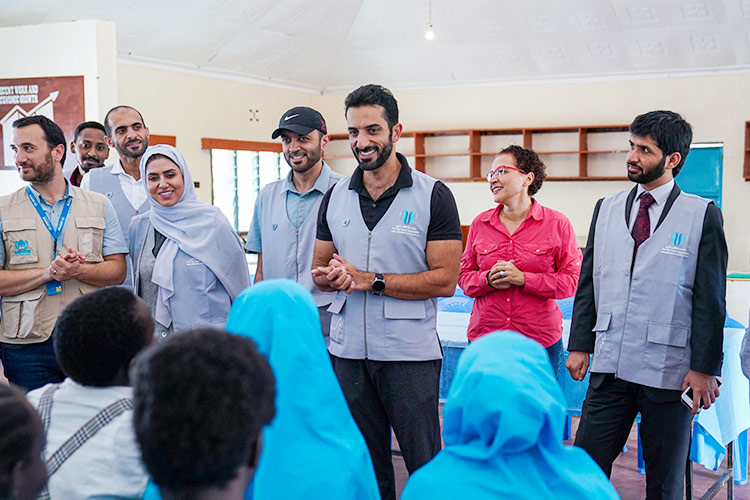 'Almost 40 percent of Kenya’s refugees and asylum seekers reside in Kakuma, and their humanitarian needs continue to rise due to the continued influx from the two main refugee producing countries of Somalia and South Sudan' 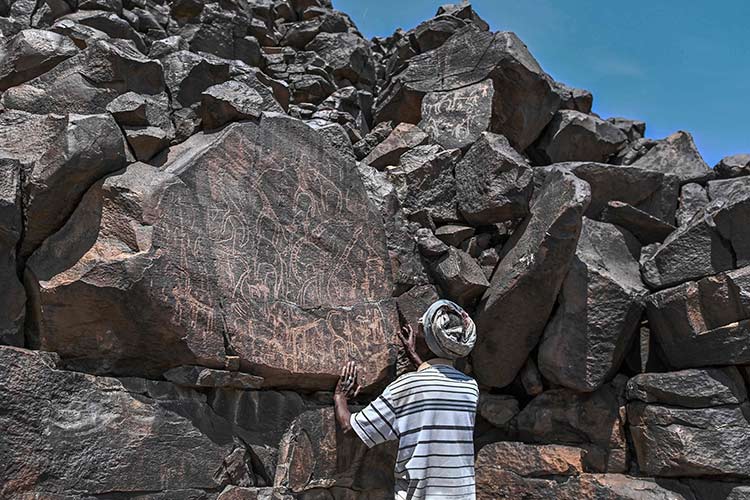 Djibouti's hidden rock art offers window to the past

These masterful works, etched onto stone in northern Djibouti, are among the most important examples of rock art in the Horn of Africa, a region rich in archaeological heritage and the birthplace of humanity.