Czech dogs learn to sniff out the coronavirus - GulfToday 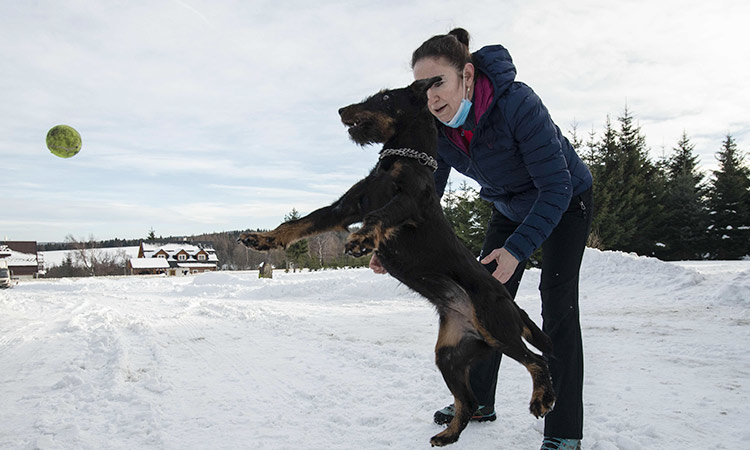 Lenka Vlachova, a trainer working at the Prague's fire brigade, plays on the snow with her Jagd Terrier dog named Laky. AFP

In a dog training centre built inside a shipping container located in a Czech mountain village, Renda, Cap and Laky are being put to the test.

They sniff at six vessels, each containing a piece of cloth with scent from patients with COVID-19, negative donors, or fake samples.

"Good boy!" exclaims Lenka Vlachova, a trainer working at Prague's fire brigade, as jagdterrier Renda sits down by one sample, wagging his tail.

"The study is designed to verify dogs' ability to detect COVID-19 and generate a method enabling the use of trained dogs in combating the pandemic," project head Gustav Hotovy told AFP.

"The method should also work with other diseases, even more lethal than Covid-19," Hotovy said.

"In the end, we should be able to detect a huge number of people in a very short time with a trained dog," he said, speaking in the snowy village of Kliny near the German border.

Vlachova said the first study confirming dogs are able to detect tissue attacked by a virus was conducted in the United States about a decade ago.

"The virus changes the human tissue, affecting the scent signature of the person," she said.

Hotovy, a retired cynologist whose team started training the dogs last August, said that the signature changes "so much that it is immediately discernible for the dogs". 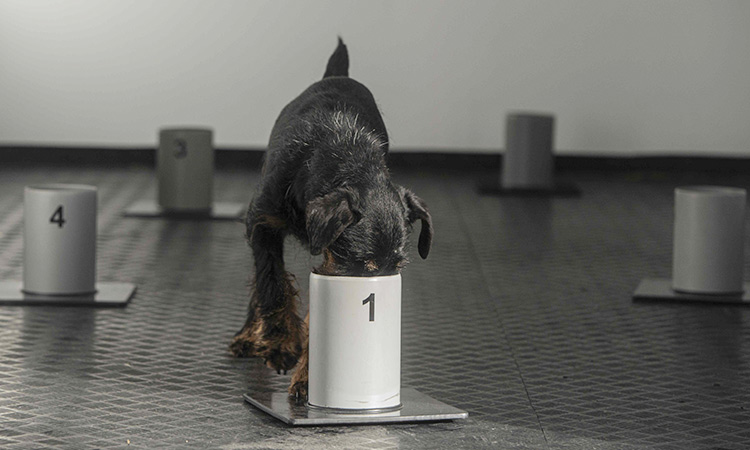 A jagd Terrier dog named Renda sniffs inside a bin marked with the number one at the training centre for Covid-19 sniffing dogs. AFP

The samples used are obtained merely by rubbing a piece of cotton against the patient's skin.

The team then has to ensure the sample is virus-free to prevent the dogs from catching the disease.

Using the same sampling method, a Finnish team has been using dogs for testing at Helsinki airport, reporting its dogs can detect the virus with close to 100 per cent accuracy.

Vlachova said the Czechs would like to work together with the Finns or with French and German teams working on similar projects.

Unlike their Western peers, the Czech team works in its free time and relies on scant financial means provided by a local dog food maker.

Cynologist Katerina Jancarikova said the virus-affected tissue made up "just a tiny fragment in the overall scent, a part of the dogs' puzzle".

"It's like looking for Wally," she said, referring to the popular children's books in which a tiny character in red and white stripes has to be found in pictures of a huge crowd.

Jancarikova said any dog can be trained for detection as long as it is cooperative.

As Vlachova led Renda back to the van, Hotovy walked into the training centre with a sturdy giant schnauzer named Laky who eagerly sniffed at the vessels, placed in a different pattern, before easily identifying the positive one.

"He was once reluctant to cooperate," he chuckled, adding that the dogs showed the same eager response when let loose in a nearby house where a guest who tested positive for Covid-19 had been staying.

"They immediately jumped at his bed with the same happy reaction they show over a positive sample in the centre," he said.