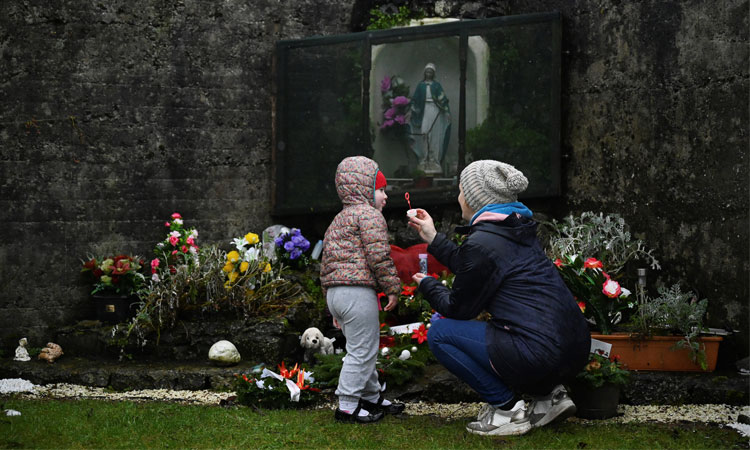 Denise Gormley and her daughter Rosa, 7, pay their respects at the graveyard, where the bodies of 796 babies were uncovered, in Tuam, Ireland, on Tuesday. Reuters

Some 9,000 children died in homes for unmarried mothers and their offspring run by Ireland's Catholic Church from the 1920s to 1990s, an inquiry found on Tuesday, an "appalling" mortality rate that reflected brutal living conditions.

Ireland's Commission of Investigation into Mother and Baby Homes (CIMBH) found "disquieting" levels of infant mortality at the institutions — operating in the historically Catholic nation as recently as 1998.

"It's difficult to conceive of the scale of the tragedy and the heartbreak behind that figure of 9,000 children and babies," said Ireland's Minister for Children, Roderic O'Gorman.

The report, which covered 18 so-called Mother and Baby Homes where young pregnant women were hidden from society for decades, is the latest in a series of government-commissioned papers that have laid bare some of the Catholic Church's darkest chapters.

Relatives have alleged the babies were mistreated because they were born to unmarried women who, like their children, were seen as a stain on Ireland's image as a devout Catholic nation. 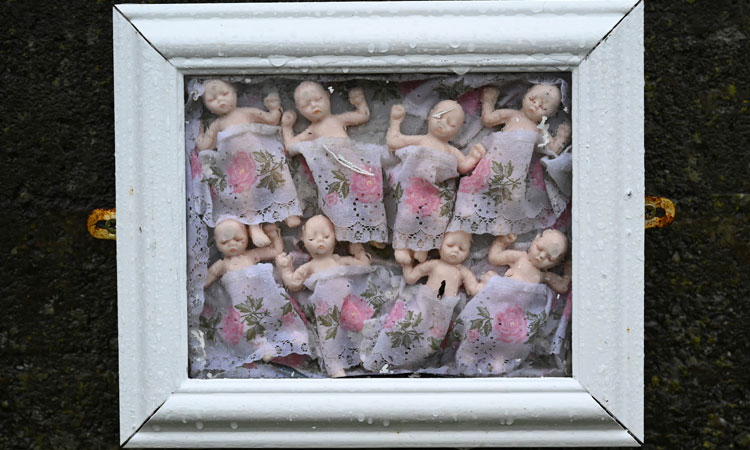 A detail view of the Tuam graveyard, where the bodies of 796 babies were uncovered at the site. Reuters

Government records show that the mortality rate for children at the homes where tens of thousands of women, including rape victims, were sent to give birth, was often more than five times that of those born to married parents.

Prime Minister Micheal Martin will make a formal apology to those affected by the scandal and will provide financial recognition and laws to support excavation, exhumation and, where possible, identification of remains, the government said in a statement.

"The report makes clear that for decades, Ireland had a stifling, oppressive and brutally misogynistic culture, where a pervasive stigmatisation of unmarried mothers and their children robbed those individuals of their agency and sometimes their future," Children's Minister O'Gorman said in a statement.

The investigation was launched six years ago after evidence of an unmarked mass graveyard at Tuam was uncovered by amateur local historian Catherine Corless, who said she had been haunted by childhood memories of skinny children from the home. 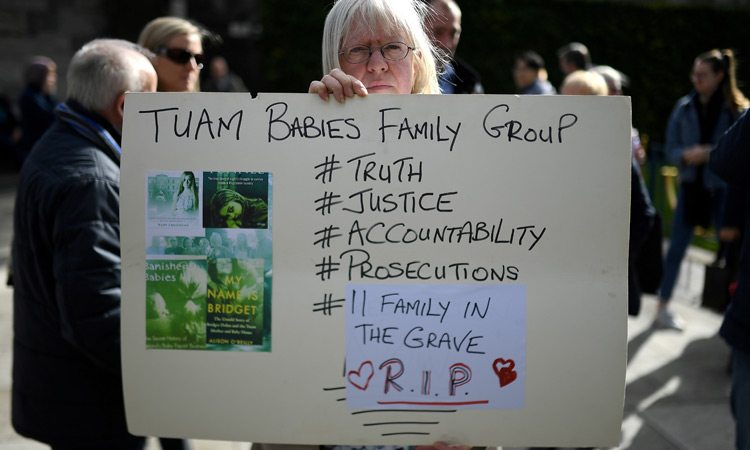 A woman holds a poster at a funeral procession in remembrance of the bodies of the infants. Reuters

The remains of 802 children, from newborns to three-year-olds, were buried between 1925 and 1961 in just one of the so-called Mother and Baby Homes, a 2017 interim report found. Around 9,000 children died in all, Tuesday's report found — a mortality rate of 15%.

The Church's reputation in Ireland has been shattered by a series of scandals over paedophile priests, abuse at workhouses, forced adoptions of babies and other painful issues.

Pope Francis begged forgiveness for the scandals during the first papal visit to the country in almost four decades in 2018.

Among those parents who have come up with novel monikers for their newborns, is a couple hailing from the Indian state of Chhattisgarh who named their twins Covid and Corona.

The findings from a study of 16 women released on Friday also found that most were mildy infected, while more severe reactions occurred in older women with a high body mass index — a trend that is mirrored in the general population.