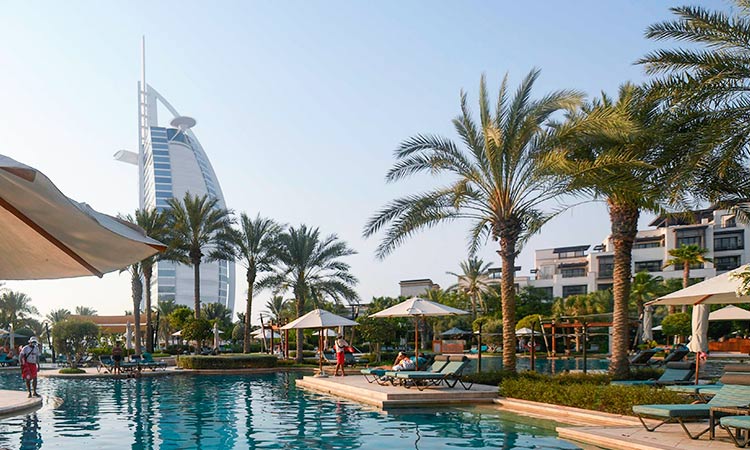 Tourists sunbathe by the pool of the Al Naseem hotel in Dubai. AFP

With a "welcome" passport sticker and coronavirus tests on arrival, Dubai reopened its doors to international visitors on Tuesday in the hope of reviving its tourism industry after a nearly four-month closure.

But businesses are mainly betting on those already living in the gleaming desert city to energise its ailing economy and serve as a test run before wary foreign holidaymakers return.

Italian tourist Francesca Conte said on arrival she was worried up until the last minute that her flight would be cancelled.

"When I saw passengers queueing at the gate, I thought today we are not leaving, since the trip to Dubai had already been skipped three times," Conte said.

She said she felt sad "seeing empty spaces" on the plane and stewards and hostesses "dressed like nurses and doctors", in their lab coats.

In Dubai's Atlantis resort, at the head of a palm tree-shaped island, workers in face masks clean cushions, sofas and king-size beds in luxury suites that have largely been vacant since the coronavirus pandemic.

The resort and seven other hotels in the regional tourism hub contacted by Reuters are seeing business pick up as Dubai reopened to foreign visitors on Tuesday, but do not expect a significant increase before the fourth quarter of 2020.

"Bookings have started to increase," Tim Kelly, managing director at Atlantis Dubai, said, adding he expected a "solid" fourth quarter for the resort, known for its giant aquarium and water slides.

VIDEO: Dubai is all set to welcome tourists from all over the world

The resort shut in March as the United Arab Emirates imposed a coronavirus lockdown and reopened in mid-May when restrictions started easing gradually. Curfews were fully lifted late last month and commercial business and public venues have reopened.

The coronavirus outbreak delivered a blow to Dubai, one of the most visited cities globally, where tourism accounts for more than 11% of GDP. Dozens of hotels closed while occupancy rates fell to less than 10% in others.

A beach lifeguard is seen at the Atlantis The Palm hotel. Reuters

People swim at a swimming pool in the Atlantis The Palm hotel. Reuters

Patrick Affley has breakfast with his family in the Atlantis The Palm hotel. Reuters

A worker wearing a protective suit sterilises a room. Reuters

A man with his daughter watch the aquarium in the Atlantis The Palm hotel. Reuters

The UAE, of which Dubai is a part, has not yet announced the reopening of its borders to foreign visitors on a federal level. The Gulf state halted commercial passenger flights in March, but last month resumed regular outbound flights for citizens and residents.

Khalifa Bin Braik, managing director of hotels at Majid Al Futtaim Properties, said he expected demand to remain soft in the near-term given continued COVID-19 concerns globally and the seasonal summer lull in the Gulf.

"The majority of bookings at this point are coming from the Middle East and Europe ... we are looking at approximately 25% occupancy at our hotels in Dubai to the end of September," he said.

For now, most hotels are betting on staycations by residents like Patrick Affley who usually takes his family home to the United Kingdom for six to eight weeks.

"Unfortunately we can't do that now, so we are making the best of Dubai and all it has to offer," Affley said over breakfast with his wife and three children at Atlantis.

Dubai Economy said that during the month of February, 10 businesses were closed, 93 were warned and 246 were fined for not following precautionary measures set to limit COVID-19.