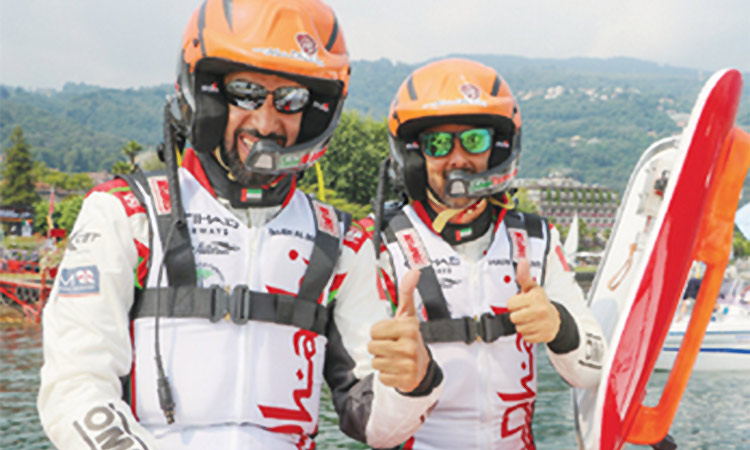 Starting race one in third place after the qualifying shoot out, Torrente and Mansoori in Abu Dhabi 4 held off a big challenge from Australians Tom Barry-Cotter and Ross Willaton in Maritimo.

Earlier, Torrente and Mansoori in Abu Dhabi 4 were third fastest (2.27.616) in the qualifying shootout on Lake Maggiore which saw Australians Tom Barry-Cotter and Ross Willaton in Maritimo (2.26.426) grab pole position.

Pal-Virik Nilsen and Jan Trygve Braaten in The Blue Roo (2.26.753) were second fastest, while Tayer and Majed in Abu Dhabi 5 narrowly failed to progress from the first qualifying session after setting the sixth fastest lap.

Tayer said: “My big aim ultimately is to win the world championship. But what makes Team Abu Dhabi so strong is how committed we all are to work together for the benefit of the team. We think as a team, not as individual drivers.

“Majed and I are very close, both in the boat and out of the water. We motivate each other.”

The XCATS return to the water at mid-day on Sunday for official practice before the decisive second Grand Prix race gets under way at 5.20pm.

The Stresa leg is the opening round of the championship and – after Italy – it will go for a long trip to China with no less than four legs scheduled.

The UIM XCAT World Championship raced already on Lake Maggiore in 2013 and 2014, when an enthusiastic presence from the public filled the shores of the Lake to attend some of the most thrilling races ever.