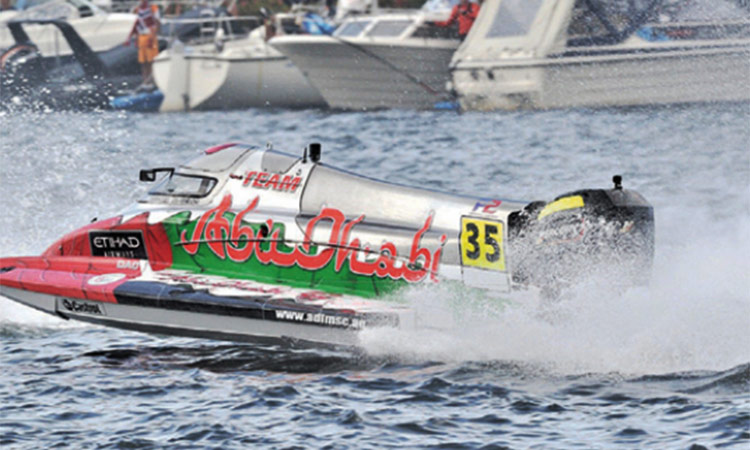 Qemzi, who has carried a 14-point lead over Dutchman Ferdinand Zandbergen into the third round of the series in Brindisi, was in dominant form again during the Group A free practice session, setting a fastest lap of 34.5 secs.

Qemzi, the 2017 F2 world champion and opening round winner in Lithuania, looked in perfect shape to pursue a third consecutive pole position later in the day for tomorrow’s Grand Prix of Italy commencing at 6.30pm local time.

The two Emirati drivers had spent two days earlier in the week testing on Lake Maggiore in San Nazzaro, Italy under the guidance of Team Abu Dhabi manager, Guido Cappellini.

Rounds 3 and 4 will be raced for in Viverone, Italy over the weekend of Sept.6-8.

Both Victory Team drivers aware of the task that lies ahead for the men in blue.

“This next race will continue to be transition period for both of us as we continue building up on our capabilities as a unit. We are testing a brand-new boat and things have not exactly gone our way as we seek the best set-up and weight transfer on the boats,” Fahim related as the team prepared to leave for Italy, on Thursday.

“Considering that this is my first year in F2 racing, I feel I still have a lot of challenges before me, especially with the new boat. The one hope is to continue the way we have done so far, and the evolution and results will automatically start showing,” he added.

“We are aware that Victory Team is among the best, and to keep this position we have the responsibility of always pushing the limits of racing. This week in Brindisi is going to be no different as we go all out to see how much we can get from the new boat. Hopefully we can find ourselves among genuine contenders,” Fahim stressed.

During Round 2 in Tonsberg, Norway, Victory Team’s Al Mansoori ended in 13th place in a race that was won by Germany’s Stefan Hagin ahead of Team Abu Dhabi’s Rashid Al Qamzi and Portugal’s Duarte Benavente.

“The team has been working hard and we have made the progress when compared to our performance in Round One in Lithuania. We need to just sit together and see how we can move ahead so that we are among the top competitors,” Al Mansoori related.