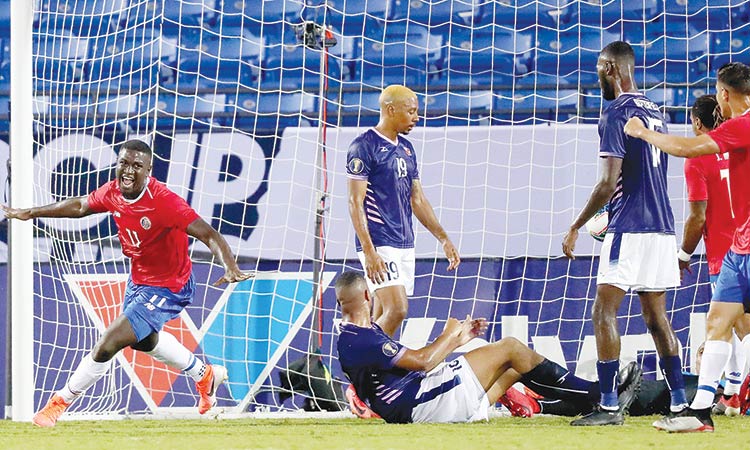 Frisco: Goals from Mayron George and Elias Aguilar helped Costa Rica to a 2-1 victory over Bermuda in Frisco, Texas, on Thursday that also earned them a place in the quarter-finals of the Gold Cup with a match to spare.

Haiti, who earlier beat Nicaragua 2-0, also qualified for the quarter-finals with Costa Rica’s victory. Both sides have won two games and meet in New Jersey in their final Group B match on Monday. George opened the scoring for Los Ticos in the 30th minute when he pounced on a shot parried away by Bermuda goalkeeper Dale Eve and fired in from close range.

Aguilar doubled the lead in the 54th minute when the Bermuda defence failed to pick him up when he got the ball inside the box and he skipped in a shot from distance.

Nahki Wells converted a 59th-minute penalty for Gold Cup debutants Bermuda, who had some decent second half opportunities but were unable to find an equaliser in the hot and humid conditions in Frisco. Bermuda finish their campaign against Nicaragua, also in New Jersey on Monday.

Haiti were the fortuitous beneficiaries of two deflected first half goals then produced a solid second half defensive effort to beat Nicaragua.

Despite Nicaragua controlling possession for most of the game, Haiti got on the board in the 22nd minute when Steeven Saba’s long-range shot deflected off a defender past Nicaraguan goalkeeper Henry Maradiaga. Haiti doubled the advantage 12 minutes later when Nicaraguan defender Manuel Rosas deflected the ball into his own net for an own goal on a scorching hot day in Frisco.

The Haitians are unbeaten in Group B. Second-placed Costa Rica face Bermuda later on Thursday.

Haiti and Costa Rica meet in New Jersey on Monday.