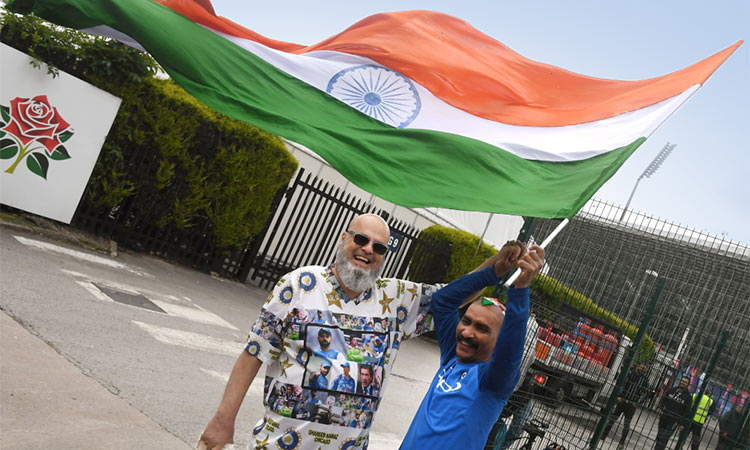 India fans won't leave anything to chance for their team's World Cup match against bitter rivals Pakistan as they turn superstitious in a bid to inspire their team to a memorable victory.

Virat Kohli's side clash with Pakistan in Manchester on Sunday in the most eagerly-anticipated games of the group stage.

With bi-lateral series between the two nations suspended after India blamed Pakistan for the Mumbai terror attacks in 2008, the Asian giants only meet in multi-nation events.

India boast a 6-0 record against Pakistan in the World Cup and their supporters are willing to do whatever it takes to ensure that impressive streak remains unblemished.

"I have come all the way from New Jersey with my brother-in-law to watch India beat Pakistan at Old Trafford. It's not a vacation but a pilgrimage for us," Hiten Patel, an Indian who lives in the US, told AFP.

"My brother-in-law and I have decided to abstain from non-vegetarian food till the India-Pak match gets over and hopefully that is our totka (a charm) for India to win."

Two-time champions India, one of the favourites to lift the trophy along with holders Australia and hosts England, have won two of their first three matches, with the other rained off.

Pakistan have lost two of their four games, but Indian fans are wary of their rivals' unpredictable nature after a shock loss in the 2017 Champions Trophy final when Sarfaraz Ahmed's team hammered favourites India.

"You never know with this Pakistani team. They may be down and out but somehow manage to pull a rabbit out of their hats against India," Percy Lakdawada, an Indian living in London, told AFP.

"I always travel to see India play in England and as a ritual I enter the stadium by putting my right foot first. And trust me whenever I have forgotten to do that India has lost," said the 54-year-old businessman.

India's first two matches in Southampton and London have witnessed a sell out crowd dominated by Indians and the rest of the venues are expected to be no different.

Australia skipper Aaron Finch was not surprised by the sea of blue at the Oval on Sunday in contrast to just a handful of Aussie fans.

While most fans prefer to wear the Indian team's jersey when taking their seats in the stands, one woman told AFP that the blue is bad luck for her.

"I once wore the Indian team jersey during a match in the 1999 World Cup and India lost. Since then I just wear any other colour than blue," said Meena Jain, who lives in Nottingham and is travelling for four Indian games including the Pakistan showdown.

"My husband and my son though will cheer the team in blue," the 46-year-old housewife added.

Many players are also superstitious, with Indian icon Sachin Tendulkar always following a certain regimen ahead of matches during his illustrious career.

"Sachin never wanted anyone to even wish him good luck before he went into bat," Tendulkar's biographer Boria Majumdar told AFP.

"For example at Centurion (versus Pakistan in the 2003 World Cup) when coach John Wright went to speak to him, he literally wished John wouldn't say a word.

"The moment the umpires went on the field Sachin walked out and for once took first strike. The rest is history."

Tendulkar's superstitious approach inspired a match-winning knock of 98 that once again stamped India's World Cup superiority over Pakistan, with many of his compatriots hoping their own rituals produce the same outcome on Sunday.