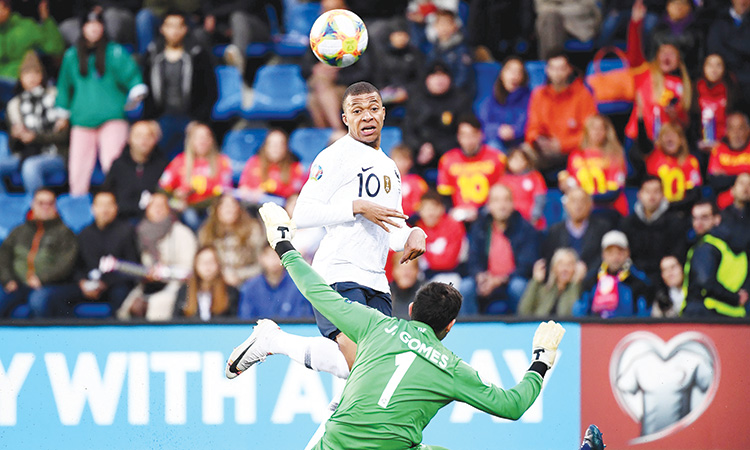 Paris: Italy needed a late winner from Marco Verratti to defeat a determined Bosnia-Herzegovina 2-1 in Euro 2020 qualifying Tuesday, while Germany and France piled up the goals in lopsided victories.

Edin Dzeko fired Bosnia in front in Turin, but Lorenzo Insigne equalised shortly after half-time and Verratti curled home on 86 minutes to earn a fourth win in as many attempts for Roberto Mancini’s side in Group J.

World champions France rebounded from last weekend’s defeat in Turkey with a trouble-free 4-0 win away to minnows Andorra.

Kylian Mbappe opened the scoring with a chipped finish on 11 minutes, with Wissam Ben Yedder and Florian Thauvin adding to their lead in the first half.

Zouma bundled home a fourth on the hour as France reclaimed top spot in Group H after Iceland beat Turkey 2-1 in Reykjavik. Two headers in the first half by centre-back Ragnar Sigurdsson saw Iceland draw level on nine points with France as well as Turkey, for whom Dorukhan Tokoz scored a consolation.

Germany made light work of Estonia with a 8-0 victory in Mainz. Gnabry and Reus scored two goals each, with Leon Goretzka, Ilkay Gundogan, Timo Werner and Leroy Sane also on target, as Germany ran riot to seal a third win from three games in Group C.

Joachim Loew’s team are still playing catch-up to Northern Ireland after Paddy McNair struck four minutes from the end in a 1-0 victory in Belarus.

Belgium extended their perfect start to Group I with a 3-0 defeat of Scotland in Brussels.

Romelu Lukaku headed in an Eden Hazard cross on the stroke of half-time and bagged a second early in the second half, with Kevin De Bruyne thumping home another at the death.

Slovakia were 5-1 winners in Azerbaijan where Marek Hamsik scored twice.