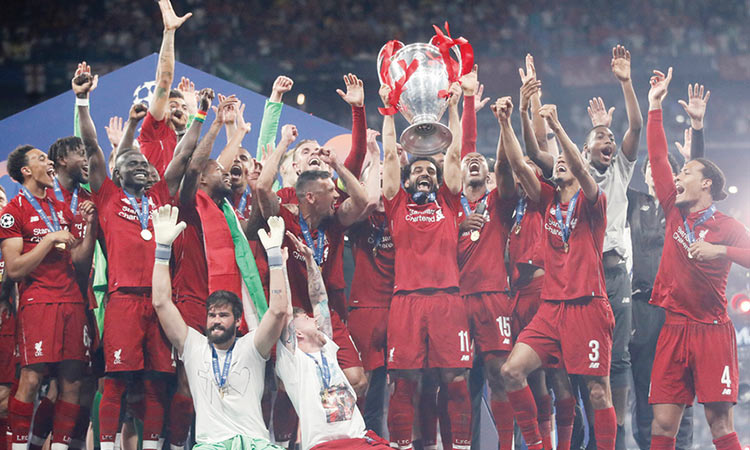 Liverpool’s Mohamed Salah (centre) along with team-mates celebrates with the trophy after winning the Champions League final against Tottenham Hotspur on Saturday. Agence France-Presse

Mohamed Salah was off injured within 30 minutes of last year’s Champions League final but celebrating inside two minutes of this one. The last props of the opening ceremony were not even down the tunnel when Salah lashed his penalty past Hugo Lloris before lingering to show his joy in front of the Tottenham fans, long after his team-mates had trundled away.

Salah has history with Spurs supporters, largely on account of being the main threat to Harry Kane winning the Golden Boot in recent seasons, but perhaps there was more to why he wanted to hang on the moment.

After all, it was on this stage last year, with club football’s biggest prize in sight, that Salah saw his final ended early by a tug from Sergio Ramos and a tumble on his shoulder.

Taken off after half an hour, Salah lay in hospital, helpless while Liverpool were beaten 3-1 by Real Madrid and then he struggled at the World Cup, lacking sharpness as Egypt were knocked out without a victory.

“Before the game, I looked at a picture of last year and we were so disappointed to lose the final,” Salah said on Saturday night.

“I was very disappointed after that injury, I went off after 30 minutes and we lost the game. It motivated me to win today. When you know how it feels to lose, you say to yourself ‘Let’s go and win that’.”

Salah had been less explosive in recent months, perhaps because opponents are warier, or perhaps just because sustaining those levels of performance was always going to be a tall order.

But in many ways this final became Salah’s final, as soon as Moussa Sissoko thrust his arm out to point to a team-mate and Sadio Mane’s cross struck him after 23 seconds.

At the end, as Liverpool’s fans behind him roared, plumes of red filling the air, Salah arched his neck back and looked to the sky.

“I think our game is more mental,” he said. “You have to believe in yourself and you can see the players were believing in themselves tonight.

“Everything happens for a reason and last year when we lost the final, I think we were meant to come back and win it this time.”

When he was growing up in Nagrig, a small farming town in Egypt, Salah would play video games and invariably choose Liverpool as his club. Now 26, he lifts his most prestigious trophy with them too, and the only one, other than a pair of Swiss Super League titles with Basel.

For all his individual accolades, and there are many, Salah now has a concrete reward to match his talent and for this Liverpool side too, who lost the Premier League title by one point, arguably to the most complete team the competition has ever seen.

Salah beat Kane to the Golden Boot then and this year too, Tottenham’s striker deprived of the last six weeks of the season due to the ankle injury that made him a doubt even to play here.

Kane started but looked like a striker in his first match in almost two months and Salah was guilty of indecision himself, perhaps the three-week break leaving both these teams slightly jaded and short of zip.

He squared up Jan Vertonghen in the box but was unable to nip by, he attempted a flick to Mane but it fell short. He volleyed over from the edge of the area, moments after seeing Danny Rose head away off his foot at the back post.

If Salah was below-par so were Liverpool but it mattered little when the final whistle blew.