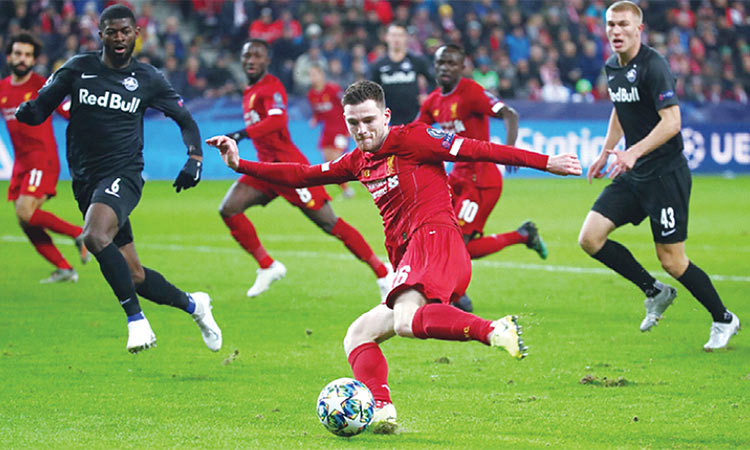 Liverpool’s Andrew Robertson in action during their Champions League Group E match against Salzburg in Salzburg on Tuesday. Reuters

Defending champions Liverpool will be the team others want to avoid when the draw for the last 16 of the Champions League is held on Monday, left back Andy Robertson has said.

Liverpool reached the knockout stages as group winners with a 2-0 victory at Salzburg on Tuesday, and could be drawn against Real Madrid, Atletico Madrid, Borussia Dortmund, Atalanta or Olympique Lyon.

Juergen Klopp’s team have made the final of Europe’s elite club competition two years in a row, finishing runners-up to Real in 2017-18 and beating Tottenham Hotspur 2-0 to win their first trophy under the German in Madrid last season.

“We’re respected in this tournament. The way we’ve done things in the last two years, nobody wants to play against us,” Robertson said.

“That’s the atmosphere we’ve created, a team which has been to the final twice and has lost one and won one.

“Maybe the first season when we went to the final... we did not get the respect we deserved. Now we know we are respected in Europe. No one will want us.”

“We’ll wait... and see who we get,” Robertson added. “We know it’ll be tough, regardless, but we look forward to the challenge as we want to go far in this tournament again.

“We know that now we’re the champions everyone wants to beat us.”

Teams that have qualified: