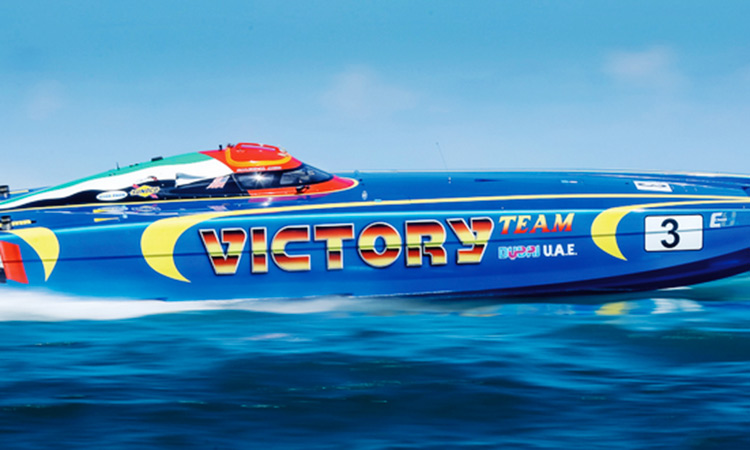 The Victory Team pairing of Salem Al Adidi and Eisa Al Ali are looking expectantly towards a top position in the race.

The Victory Team pairing of Salem Al Adidi and Eisa Al Ali are raring to go all out for an outright win in the second round of the 2019 ABPA Offshore Championship to be held on Camden on the Lake in Missouri, this weekend.

Al Adidi and Al Ali brought their Victory Boat No.3 in second behind James Sheppard and Steve Curtis’ ‘Miss Geico’, while Darren Nicholson and Giovanni Carpitella brought their 222 Racing boat in third. That result in the season opener on Cocoa Beach Florida earned the Victory Team 93 points while Sheppard and Curtis are at the top with 104 points and 222 Racing is in third with 83 points.

“Technically, tomorrow will be our first experience ever on the calm waters of the lake. Both of us are looking expectantly towards a top position in this race,” Al Adidi said from Camden on the Lake.

“This race will be a brand-new experience for both of us as it is going to be something different for most of the boats here. We are enjoying every moment of this experience with the hope that we will get the result we want,” he added.

Saturday’s action will get underway with the opening ceremony at 10 am (7 pm UAE time), while the first of five races in various categories will start from 11 am (8 pm UAE time).

“Right now our priority is to get the finer things correct. We need to ensure the boat has the best set-up so that we can be where we want to be at the end of the week,” Adidi narrated.

“Our crew has been extremely focused on getting the minor details in order – the best speed, the best balance and the best acceleration so that we can go out there and prove ourselves as being the best in the business,” he added.

Luckily Adidi and throttleman Ali are both huge fans of flat, calm waters. “Having calm waters gives us an advantage as that suits our style of driving. It also gives us an opportunity to concentrate on the speed element and target the top position on the podium,” he shrugged.

“Besides being world champions, we are also good friends. And this aspect also helps us be the best we want to be. The experience of understanding each other will come in handy when we go out there on the water,” he stressed.

After Lake Ozark, racers will move on to the third round in Sarasota (July 5-7) followed by St Clair (July 26-28), the penultimate round in Michigan City (August 2-4) and the season finale in Fort Myers from October 10-12.

Meanwhile, Victory Team’s defending two-time world champion Kevin Reiterer took his rightful place at the top of the grid at the end of qualifying at the Pole Position run in the Ski Division GP1 category at the Grand Prix of Italy – Round Two of the 2019 UIM-ABP Aquabike World Championship, here in Olbia, on Friday.

With more than 130 riders from 29 nations converging for the second round of the world championships being held at the coastal city in northeast Sardinia, Reiterer was in a world of his own as he ended in second on the time charts behind Belgium’s Quentin Bossche in the Ski Division GP1 category to be denied of his second pole position of the season. Frenchman Antoine Goethals came in third.

The 26-year-old from Austria, who was crowned a world champion at the end of December last year in his first year with Victory Team, dominated to finish the mandatory 15-minute qualifying session well clear of the chasing pack of Bossche and Goethals. Norway’s Daniel Svae Andersen was among the major casualties at the end of the first session of qualifying after finishing outside the top-10.

In the second ten-minute qualifying run it was Bossche coming up with a quick time of 1 minute, 30.92 secs leaving Reiterer in second with a time of 1:31.60, while Goethals’ time of 1:32.52 was good for third spot on the grid when the first of two motos are held on Saturday.

Reiterer was not too worried about his second position as he has got better with each race starting with his second world crown at the end of the 2018 season. “Everything has been going on well for me, and I hope we have this same luck going for us for a long time,” Reiterer stated.