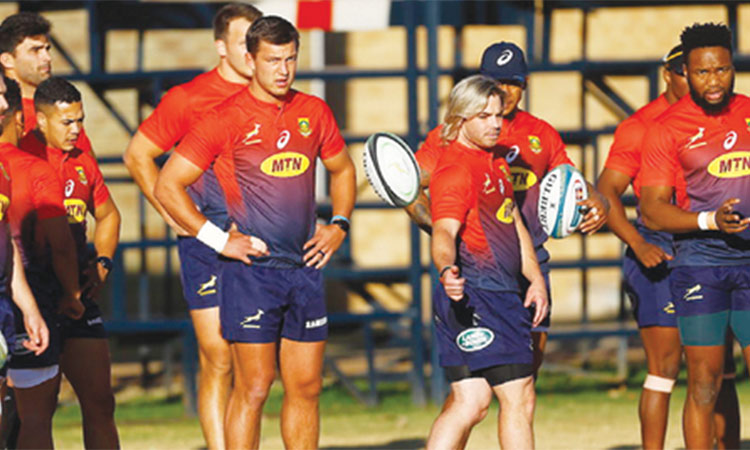 South African players attend a training session ahead of their Rugby Championship match against Argentina.

While the Springboks top the table after beating Australia and holding New Zealand, the Pumas are last following losses to the All Blacks and the Wallabies. A bonus-point win in northwestern Argentina will ensure South Africa finish first, but Australia or New Zealand can overtake them, at least temporarily, by winning in Perth 10 hours earlier.

The Springboks have lost two of their last three rugby Championship matches away to Argentina, who are trying to snap a seven-Test losing streak.

“We have great respect for Argentina because after bearing them in Durban last year we came here and they gave us a good hiding,” said Erasmus, referring to a 13-point defeat in Mendoza.

“The match in Salta is going to be very difficult, but we must beat Argentina to win the rugby Championship for the first time.

“I have never been to Salta so the coaches and players who went there in previous seasons have briefed me. It seems to be a tough place to leave with a victory.”

South Africa have had mixed fortunes at the 20,000-capacity Estadio Pablo Ernesto Martearena, losing by two points in 2016 and winning by 18 the following season.

Erasmus says Argentina, a mix of stars from Super rugby outfit the Jaguares and French Top 14 clubs, were unlucky in both rugby Championship defeats last month.

“There is more to the Pumas than just the scorelines. If you look only at the results, there is a danger of being sidetracked.

“Take the home game against New Zealand, Argentina were pressing hard at the end and came very close to being awarded a penalty during the final maul of the match. Away to Australia, they were without (star) hooker Agustin Creevy yet came close to scoring several times.”