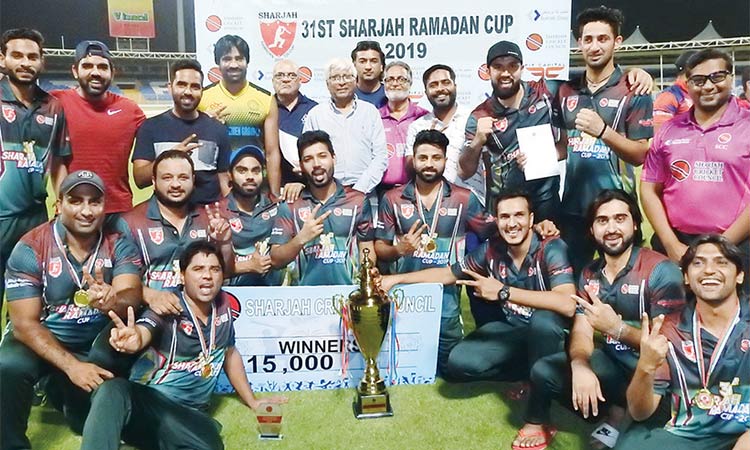 Noor Al Yemen Group players and officials pose with the trophy and their medals after winning the 31st Sharjah Ramadan Cup at the Sharjah Cricket Stadium on Monday.

Noor Al Yemen had recently won the 45th Bukhatir Premier League title. In this tournament too they were on a roll, beating opponents with relative ease right through till the semi finals. The final was no different.

After winning the toss and sending Defenders in to bat, their bowlers did well to restrict them to a meager 130 in 19.5 overs.

Later their batsmen galloped towards the target in barely 10.4 overs to hand Noor a comprehensive seven wicket win.

It was a disappointing performance from Defenders especially when they had Faizan Asif and Umer Farooq who were adjudged the best batsman and best bowler of the tournament.

Defenders struggled from the word go when opener Sana Ul Haq faced only two balls before holing out a catch to Muhammad Usman to give Sheraz Ahmad his first of three wickets.

The inform Faizan was next to depart in a similar way, caught Usman bowled Sheraz. Wajid Khan joined both openers in the dugout after facing only five balls. This time again the bowler was Sheraz and Defenders were 26 for 3.

While Sheraz wreaked havoc at the top Waheed Ahmed (3-12) and Rohan Mustafa (2-14) made life miserable for Defenders in the middle order.

But with Waqas Ahmed stroking 78 from 29 balls it hardly gave Defenders a whiff of a victory chance.

Waqas smoked seven sixes and an equal number of fours.

Rohan Mustafa chipped in with 22 while Man of the Match Waheed applied the finishing touches clobbering two sixes in his 16 from 6 balls.

Along with Ammar Badami he grabbed three wickets while Umer Sultan chipped in with two as Mavericks kept Pulse Secure to 190 for 9.

Vriitya Aravind’s unbeaten 89 was the highlight of Dubai Mammoths win over Starlets.

Chasing 175 to win, Aravind struck a dozen fours, and with Aditya Shetty (29), they took Dubai Mammoths to victory in 22.5 overs.

Earlier Kai Smith (40) and Siddanth (27) gave Starlets a solid start which was capitalised on by Sarel Botha (58 not out) but DM bowlers did well to come back and restrict Starlets to 174.

Meanwhile, the Gillette Ramadan Street Cricket tournament, to be played on May 30 and 31 and June 6 and 7, was announced on Friday.

Thirty-two teams will compete over four days across two weekends to determine who will be crowned the best street cricket team in the region.

Gillette has launched the tournament through the month of Ramadan as part of its commitment to grow the game in the region, while providing UAE-based street cricketers the chance to showcase their skills. Over 350 amateur players originally from Sri Lanka, India and Pakistan will ascend onto two newly built pitches next to Global Village, on an abandoned car park which has been completely re-imagined for the 4-day event.