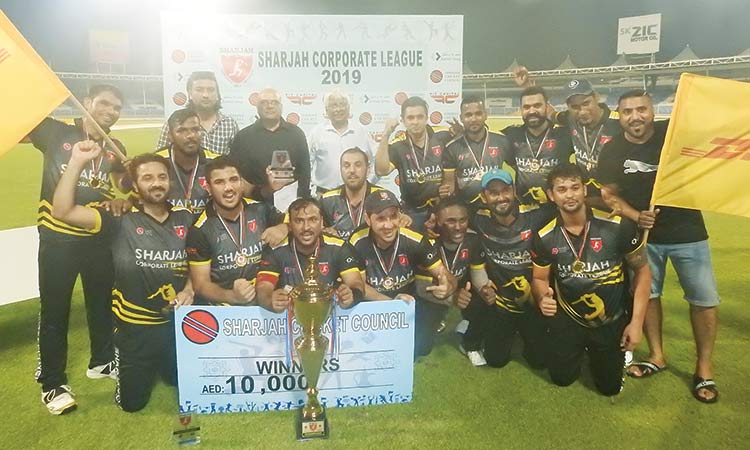 DHL players pose with the trophy after winning the Sharjah Corporate League.

DHL got the better of Gulf International by 17 runs in a high scoring final of the Sharjah Corporate League (SCL) at the Sharjah Cricket Stadium over the weekend.

The winners went home richer by  Dhs.10,000 and a trophy while the runners received Dhs.5,000 and a trophy. The tournament is being held under the auspices of the Sharjah Cricket Council.

Batting first after winning the toss DHL’s batsmen made decent contributions which took their team to a healthy 204 for 5 from 20 overs.

In reply Gulf International had a solid and brisk start but faltered after that and finished on 187 for 9. DHL did not have big partnerships yet whatever their batsmen contributed helped in posting a stiff target.

Khurram Sajjad was looking in good form during his 31 from 24 balls (1x6, 4x4) but was caught short of his crease from a direct throw by Harry Bharwal.

Up until here Gulf International were in the match but Sajid Khalil and Tharanga Jayasinghe upset all their calculations by blasting 47 runs from the last 20 balls.

Both remained unbeaten. Sajid’s 34 from 17 balls had three sixes while Tharanga’s 15 from 8 balls had two sixes.

Gulf International looked on course to get to their target when ‘Best Batsman of the Tournament’ Mujahid Shonay was at the crease.

He and Babar Ismail compiled 69 runs for the first wicket in 7.1 overs. Unfortunately once both these batsmen departed the rest of the batsmen fell like a pack of cards.

Shonay’s blitzkrieg 68 from 47 balls which was studded with two sixes and eight fours and Babar’s 27 from 16 balls with a six and four boundaries was outdone by some superb bowling from Man of the Match Waqas Alvi (4-35), Ali Mubarik (3-26) and Ryan D’Souza (2-29).

Earlier, Buta Singh Gehri starred with the bat and ball to take Gulf International into the final.

The all-rounder struck an unbeaten 50 to guide GI to a mammoth 208 for 3 in 20 overs and later scalped three wickets for 21 miserly runs to restrict Omega Insurance to 157 for 7 in 20 overs at the Sharjah cricket Stadium.

In the other semi final DHL romped to a six wicket win over Dnata. Krishna Chandran (73) and Naeem Khan (43 retired hurt) gave Dnata a formidable total of 186 despite some decent bowling from Suneth Sampat (2-40), Waqas Alvi (2-35) and Ali Mubarik (2-32).

Gulf International were off to a flying start. Although Mujahid Shonay scored only 11 runs, he and Babar Ismail took them to 21 from two overs.

Babar and Tharaka Dhananjaya then added 62 runs for the second wicket before Babar was bowled by Shane Alam for 45 (1x6, 6x4) and Tharaka fell to Abhishek Chaturvedi for 26 (2x6, 1x4).

Gulf International were still nicely placed on 126 for 3 from13.2 overs when prolific scorer Sapan Deep and inform batsman Buta Singh Gehri rubbed more salt into the wounds of Omega Insurance. Together they compiled 82 runs from the remaining 40 balls without being separated.

Sapan Deep stroked his way to an unbeaten 60 from 26 balls which included 6 sixes and two fours. Buta Singh complemented his teammate well with 50 from 24 balls (4x6, 3x4).

Rizwan KS (51 not out), Muhammad Ikram Juara (36) and Shane Alam (30) tried to keep Omega Insurance in the chase but the day belonged to Man of the Match Buta Singh Gehri (3-21). 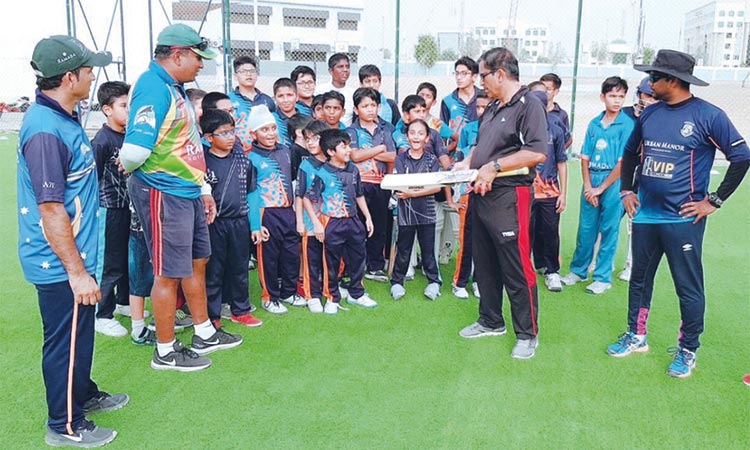