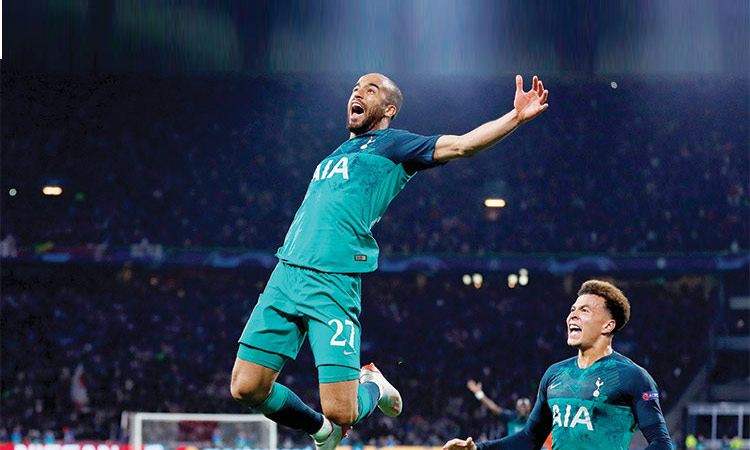 Tottenham’s Lucas Moura exults after his hat-trick against Ajax during their Champions League semi-final second-leg match on Wednesday. Reuters

Mauricio Pochettino’s Tottenham were saluted on Thursday after producing the second English Champions League “miracle” within 24 hours to set up a final against Jurgen Klopp’s Liverpool.

Lucas Moura’s last-gasp strike took Spurs to the European showpiece for the first time in their history as he completed his hat-trick and sealed an incredible 3-2 win over Ajax to leave the young Dutch side heartbroken.

Ajax, leading 1-0 after the first leg in London, scored twice in the first half in Amsterdam on Wednesday through Matthijs de Ligt and Hakim Ziyech, leaving the visitors with the improbable task of needing to score three goals without reply.

But Moura struck twice within four minutes in the second half and steered a low shot beyond the despairing dive of Ajax goalkeeper Andre Onana in the 96th minute as Spurs progressed to next month’s final in Madrid on away goals.

It matched the drama of the previous night at Anfield, where Liverpool beat Barcelona 4-0 to overturn a 3-0 first-leg deficit.

“Really, this was too much. This was a gin-addled north London fantasy,” wrote Barney Ronay in the Guardian.

The Times  hailed Spurs’ never-say-die attitude. “What happened was that Pochettino’s players, inspired by their coach’s half-time exhortations and a key substitution, reacted fully in keeping with the club’s traditions of boldness, daring and belief,” wrote chief football correspondent Henry Winter.

“To dare is to do, and they did. The game is about giving everything. It is about refusing to believe it was all over when trailing 3-0 on aggregate with 35 minutes to play, just like they had not gone meekly into the winter night when facing oblivion in the group stage.

“They fought back. It’s not about the money, even now. It’s about glory. Pochettino knows that. His players embodied that.”

But he added: “We might have to stop defining them as such, really, when they happen every night to English teams in Europe.

“Indeed, if one didn’t know better, it might be claimed that these narratives across the last 48 hours were fixed, or scripted. That they were the product of a team of writers, like ‘Game of Thrones’, or were choreographed, slam by brutal slam, like WWE.

“Except no pen could produce drama like this. Not if it was supposed to masquerade as reality. ‘Game of Thrones’ has dragons. These are men out there, flesh and blood.

“Yet there it all was. The return from the dead, the swing of Lucas Moura’s boot when all seemed destined to end in heroic failure. Moura’s hat-trick, completed with virtually the last kick of the match. It truly was the most incredible Champions League moment since -- er, the previous night.”

“They are all heroes but Lucas was a super-hero. Unbelievable hat-trick. He deserves it, he is a great guy,” a tearful Pochettino said after Tottenham’s 3-2 win in Amsterdam set up a June 1 final with fellow comeback kings Liverpool.

Tottenham midfielder Christian Eriksen even called for a statue of Lucas, who dragged Spurs back from the brink with what were remarkably his first Champions League knockout goals.

Rejected by Paris Saint-Germain after the world-record signing of Neymar, Moura propelled Tottenham to heights the French giants could only dream of on Wednesday by single-handedly firing Spurs into a first Champions League final.

Scarcely 18 months ago, he was at a particularly low ebb after finding himself frozen out in Paris despite five trophy-laden years at the club.

Mauricio Pochettino and Tottenham offered the Brazilian an escape route in January 2018, and Lucas is close to making good on his promise to take the club to the very top.

Upon his arrival in North London, he said: “I think the team is very, very strong. We can win a lot of things and why not the Champions League?”

Just over a year on and Spurs are one win away from becoming European champions after Lucas conjured up a display at the Johan Cruyff Arena befitting of the late Dutch great.

“Football gives us moments like this that we cannot imagine,” said Lucas. “We need to enjoy it. Look at me -- it’s the best moment in my life, my career.

“It’s impossible to explain what I am feeling. I am very, very happy and proud of my teammates.

“We always believed in this moment, that it was possible. We gave everything and deserved this moment. We are a family. It’s impossible to explain -- impossible.”