Al Wahda eye spot in Round of 16 - GulfToday

Al Wahda eye spot in Round of 16 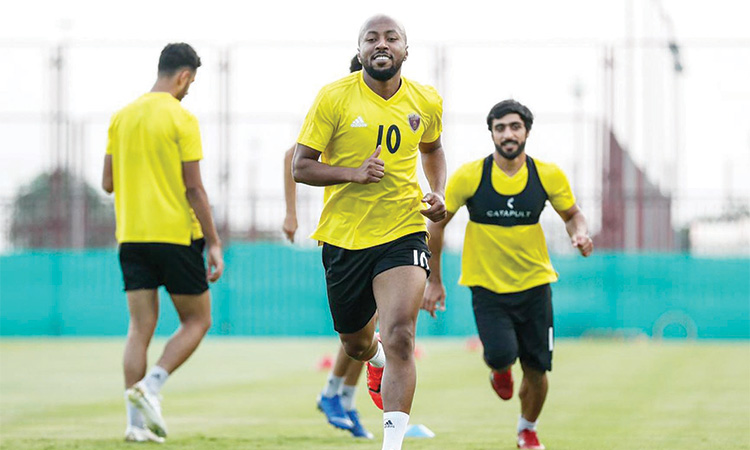 Al Wahda players attend a training session ahead of their ACL match against Lokomotiv.

The home side are looking to extend their three-match winning run and seal qualification to the knockout stage for the first time since 2007. Meanwhile, the visitors from Uzbekistan need the three points to retain their hopes of progress going into the last matchday.

Despite participating in each of the past four editions of the competition, Lokomotiv only managed to successfully navigate the group stage on one occasion, when they reached the quarter-finals in 2016.

The reverse fixture on Matchday one saw Lokomotiv start their season with a 2-0 victory in Tashkent, but Al Wahda have since turned a corner and won each of their following three games.

Meanwhile, it is the last chance for UAE’s Al Wasl as they visit Saudi Arabia’s Al Nassr to play Group A match on Tuesday.

Laurentiu Reghecampf’s men are bottom of the group with three points, having failed to add to their 1-0 win against Al Nassr on the opening matchday. A defeat at King Fahd International Stadium will consign the Dubai-based side to group stage exit for the second year running.

Al Wasl go into the match without domestic distractions, having secured top-flight survival with three games to go in a disappointing UAE Pro League campaign.

Al Nassr, on the other side, find themselves in the midst of a heated Saudi Pro League title race. They lead the table but are just one point ahead of arch-rivals Al Hilal. They go into the Al Wasl clash with one eye on Saturday’s domestic league encounter with Al Hazm.

But Rui Vitoria’s side are equally eager to get a result against Al Wasl on Tuesday as they hope to end a run of nine years in which they haven’t reached the AFC Champions League knock-out stage.

Meanwhile, Al Zawraa look to return to winning ways when they host Group A leaders Zobahan at Karbala Sports City.

The Iraqi side suffered a 2-1 home defeat at the hands of Al Nassr in their last outing and they find themselves third in the group, trailing the Saudi side by two points.

Hakeem Shaker’s men started the campaign brightly, earning a point on the road against Zobahan before recording a 5-0 victory against Al Wasl in Karbala. Back-to-back defeats to Al Nassr left them reeling, but their hopes of progress remain alive with two games to go.

Zobahan have impressed so far this season, remaining unbeaten in four AFC Champions League matches. The Isfahan-based side have ten points to their name, four points better off than second-placed Al Nassr.

A single point from their last two encounters will be enough for Zobahan to reach the round of 16 for the third time in four years.

Jeonbuk Hyundai Motors need only a point to seal their place in the last 16 as the two-time winners prepare to travel to Beijing FC on Tuesday.

Hosts Beijing, meanwhile, currently occupy second place in the Group G standings after back-to-back wins against Thailand’s Buriram United and they would edge closer to the knockout stage should they claim all three points.

The 2017 champions Urawa Red Diamonds will look to return to winning ways ahead of their visit to Buriram for a game that could see the two-time winners eliminated.

Buriram lost the reverse fixture 3-0 in Japan but are traditionally stronger on home turf; however, anything but victory would see the Thai side ousted with a game to spare.

Ulsan Hyundai will advance to the knockout rounds if they maintain their unbeaten run in the 2019 AFC Champions League when they host Group H’s bottom side Sydney FC on Tuesday.