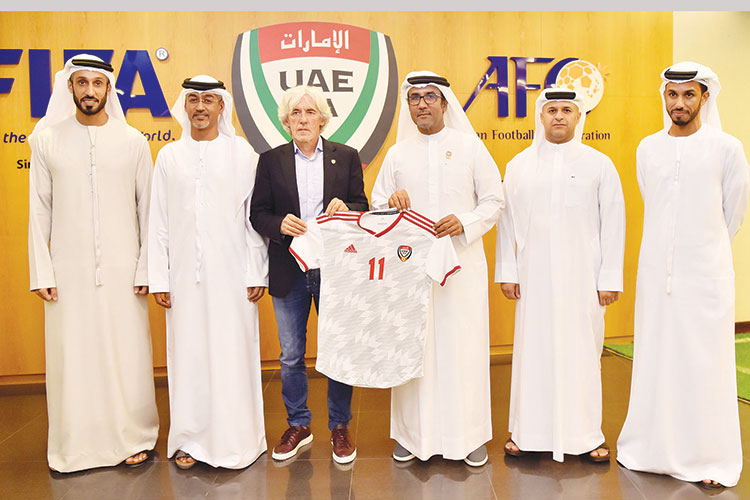 Jovanovic will take charge as the UAE team is preparing for the ongoing Asian Qualifiers for the FIFA World Cup 2022 and AFC Asian Cup 2023.  The UAE will take on Malaysia at home on March 26, 2020 before playing Indonesia away five days later.

They will conclude their campaign against Thailand and Vietnam on June 4 and 9 respectively.

The former APOEL coach has been out of work since he was sacked by the Dubai team for a second time last December after less than a year at the helm.

He had previously managed Al Nasr from 2013-2016 when he led the club to a President’s Cup and Arabian Gulf Cup double in 2014.

Sheikh Rashid Bin Humaid Al Nuaimi, Chairman of the Transitional Committee of the UAE FA, said that the national team is among the first priorities of the committee, because the goal is to compete and qualify for the decisive stage of the qualifiers and reach the World Cup 2022, stressing his confidence in the ability of the players to rise again and return to the victories.

Sheikh Rashid assured that the selection of the coach came after a series of continuous meetings of the national teams’ and Technical Affairs Committee that revised a number of coach profiles to train the National Team.

Coming to the final decision of choosing Jovanovic due to the distinctive characteristics of his resume that fit the criteria set by The National Teams’ Committee including the most important of which is his ambition for achievements and his full knowledge of the Emirati football.

Sheikh Rashid added that the current stage requires unified efforts of all sporting bodies, institutions, clubs, media and audiences in order to provide an appropriate environment for the national team to perform in the best way.

This stage requires a “one team” spirit in order to achieve positive results in regional and international competitions.

“A choice was made on Ivan Jovanovic due to the distinctive characteristics of his biography that fit the criteria set. The most important of which is his ambition and full knowledge of Emirati football, said Sheikh Rashid.

Van Marwijk was sacked as head coach of the UAE team in the first week of December, after the team was knocked out of the Gulf Cup.

The UAE were eliminated from the keenly-contested regional tournament following a 4-2 loss at the hands of Qatar in a group game both sides needed to win to advance to the semi-finals.

Van Marwijk, who led his native Netherlands to the final of the World Cup in South Africa in 2010, took over as head coach of the UAE earlier this year having previously qualified neighbouring Saudi Arabia for the finals of the 2018 World Cup in Russia.

Similar expectations were placed on the 67-year-old when he replaced Alberto Zaccheroni but the UAE have struggled so far in qualifying for Qatar 2022.

The team are currently in fourth place in their group in the second phase of Asia’s preliminary rounds, five points behind leaders Vietnam but with a game in hand.