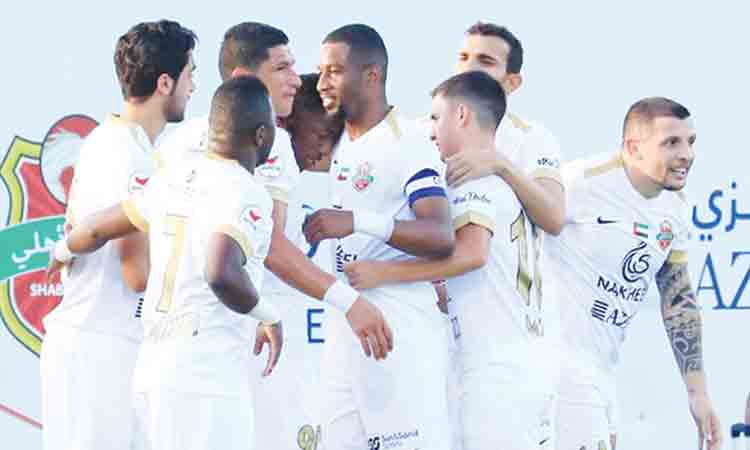 Shabab Al Ahli players celebrate after winning their match against Al Dhafra in Dubai on Friday.

Ahmed Khalil scored twice and assisted once in Shabab Al Ahli’s tough 3-2 win over Al Dhafra at Shabab Al Ahli stadium in matchweek 23 of the Arabian Gulf League on Friday.

The game started with a bang as Khalil broke the deadlock for Shabab Al Ahli just 12 minutes into the game. The UAE international forward’s long range free kick strike nestled into the back of Zayed Ahammadi’s net to give his side an early 1-0 lead.

Twenty-seven minutes into the game, the hosts were already 2-0 up. Khalil released Abdulaziz Mubarak behind Al Dhafra backline with a defense-splitting through pass. The fullback finished the ball with a clever first-time touch past Ahammadi.

The guests reduced the deficit in the final moments of the first half through an own goal by Majed Hassan Ahmed, whose heavy touch left Hassan Ali helpless in goal, restoring Al Dhafra’s hopes.

The visitors kept the momentum going in the second half, as they were awarded a penalty kick early in the second half. Suhail Al Mansoori sent the ball home from the spot to level things up in the 57th minute.

Khalil continued to impress as he regained Shabab Al Ahli’s lead in the 84th minute through another free kick. The Veteran forward smashed the ball into the back of the net from a difficult angle to make it 3-2.

The guests were forced to play with 10 men during injury time, after Sultan Al Suwaidi was shown a second yellow card in the 90th minute.

In another match, Marcos Silva scored the winner as Emirates Club edged Fujairah 1-0 away from home.

The guests needed only three minutes to open the scoring at Fujairah Stadium. Kaio Goncalves’ accurate corner-kick found the Brazilian midfielder inside the box and the latter headed home to make it 1-0.

Walid Anbar almost made it 2-0 for the guests in the 36th minute but his effort was saved by Fujairah keeper Abdulla Altamimi.

Fujairah had fewer chances on the end of the field, and failed to pose threat on Emirates’ goal until the final minutes of the first half. Mohamed Benyettou came close to netting the equalizer on the stroke of halftime, but his effort was diverted into a corner by Emirates keeper Ali Saqr.

Mohamed Khalfan and Benyettou tried to level the scoreline during the second half but were denied by Emirates’ strong defense.

The excitement continued until the final minutes of the game with both sides creating chances during injury time. Fernando Gabriel’s attempt to net the equalizer was saved by Saqr before Altamimi diverted Cheick Diabate’s effort into a corner on the other end of the field.

Benyettou kept pushing forward in the dying moments of the game, but had two attempts saved by Saqr.

Diabete was then sent off deep into injury time but it was already too late to adversely affect the guests who collected the three points.

The Falcons now sit 12th on 18 points, three above Fujairah who remain in 13th place.

This marked Emirates’ first win away from home this season and it could increase their chances of securing Arabian Gulf League safety.