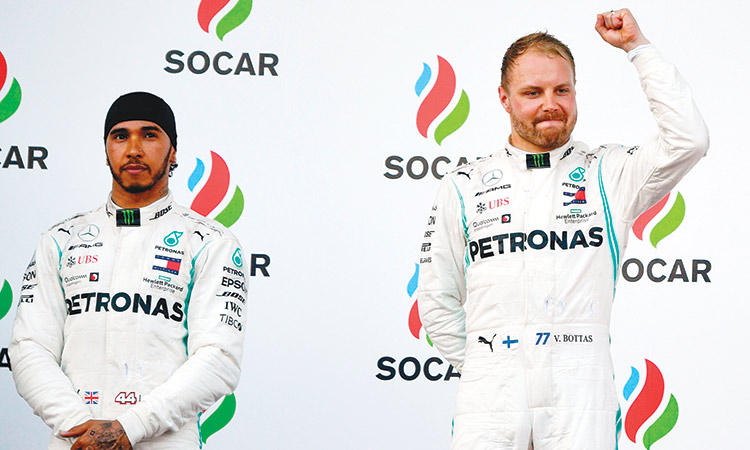 A determined Valtteri Bottas resisted an attacking final charge by his Mercedes team-mate Lewis Hamilton to win Sunday’s Azerbaijan Grand Prix and regain the lead in the 2019 drivers title race.

In a thrilling, closely-fought and dramatic race, the Finn came home 1.5 seconds ahead of Hamilton as Mercedes swept to a fourth successive season-opening one-two finish, the first team to do so since Ferrari in 1952.

It was Bottas’ second win this year and delivered some redemption after leading last year on the streets of Baku until his car suffered a puncture with three laps remaining.

“Yes, ha!” said the delighted Bottas. “Amazing job guys -- really, really strong. I am so proud to be part of this team.”

The two Mercedes men came home ahead of Sebastian Vettel of Ferrari, Max Verstappen who was fourth for Red Bull and, after a storming effort, Ferrari new boy Charles Leclerc, who started eighth on the grid and scored the fastest lap after a late pit stop.

“We are all performing really, really well,” said Bottas of the Mercedes team. “It was a tough race even though not that much was happening. Lewis put on pressure, but it was under control.”

His fifth win lifted him one point clear of Hamilton in the embryonic championship courtesy of his fastest lap in Australia. Bottas has 87 points, Hamilton 86 and Vettel has 52.

“Congratulations to Valtteri - he drove a fantastic race, made no mistakes and deserved the win,” said defending five-time champion Hamilton.

“It was all lost in qualifying (for me), but it’s great for the team - the best start we’ve ever had.”

Vettel said: “There’s plenty of work for us to do, but at this point I think we need to maximise what we can. I think we had some pace, but we had to keep an eye on Max behind.”

On a clear blue-skied afternoon by the Caspian sea, Bottas, on pole for the eighth time, made a clean start and held on as Hamilton, who had an even quicker getaway, drew alongside. The Finn, on the cleaner line, held on and rebuffed Hamilton twice more before the champion relented.

Vettel stayed third, but his Ferrari team-mate Leclerc climbed from 10th, having started eighth, to fifth by the end of lap eight. On lap 10, he passed Verstappen with aplomb at Turn One to go fourth behind Vettel.

The Racing Point team began the pit stops, followed by Daniel Ricciardo’s Renault and then Vettel, attempting an under-cut for Ferrari, with a stop in 2.4 seconds.

By lap 30, the top trio were separated by just 2.5 second, Hamilton closing on Bottas as Leclerc clung on.

On lap 32, Bottas dived past Leclerc to regain the lead while Ricciardo failed in a lunge on Kvyat at Turn Three where both ran off. The Australian then reversed into the Russian’s Toro Rosso car causing both to retire.

Hamilton followed Bottas past Leclerc on lap 33 and soon afterwards Vettel also went by. Finally, Leclerc pitted for fresh tyres after lap 35 and rejoined sixth, Ferrari having explained that an earlier stop was unworkable because the softer tyres would not last.

All this left Leclerc, who swiftly passed Gasly, more than 21 seconds adrift of Verstappen with 14 laps remaining while the Mercedes duo set the pace with Vettel, third, in pursuit.

Gasly then slowed into a slip road to retire with a power failure, prompting the use of a brief Virtual Safety Car period that ended with Bottas pulling three seconds clear of Hamilton and Vettel closing up in a final five-lap dash to the flag.