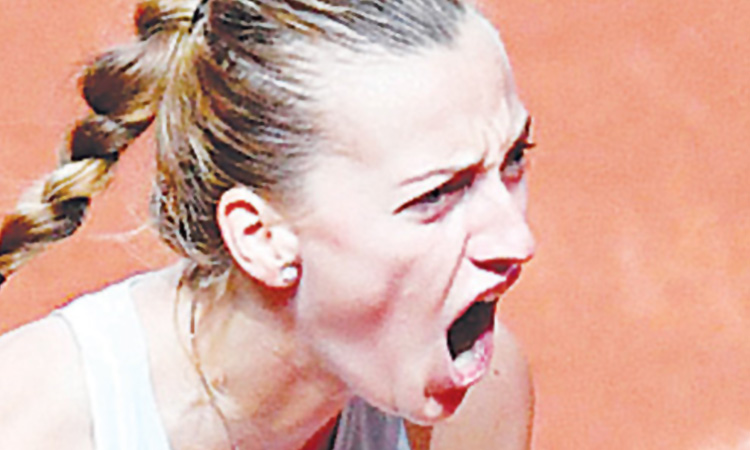 Petra Kvitova reacts in her quarterfinal match against Anastasija Sevastova at the WTA Stuttgart Grand Prix on Friday. Agence France-Presse

Rafael Nadal moved closer to an historic 12th title at the Barcelona Open on Friday with a 7-5, 7-5 defeat of Germany’s world number 51 Jan-Lennard Struff.

The top seed at his home event now stands just two wins away from becoming the first player in ATP Tour history to capture the same title 12 times. He currently owns 11 at Monte Carlo, Roland Garros and Barcelona.

Nishikori will take on Russian Daniil Medvedev on Saturday after the seventh seed stopped lucky loser Nicolas Jarry of Chile 6-3, 6-4.

Nishikori, the winner here in 2014 and 2015, served out victory after his 104th-ranked opponent slipped in the penultimate game and appeared to strain a right thigh muscle. Carballes Baena took an injury time out before returning to court as Nishikori wrapped up the win, his 16th of the season.

“In the first set, everything was working well for me,” Nishikori said.

“I was hitting my forehand heavy, which I think you need to do on clay.”

The contest quickly turned into a series of pounding groundstrokes from both players, Nishikori striking first when he broke in the opening game -- enough to claim the first set. But Carballes Baena struck back in the second, with Nishikori missing on eight break point chances in his opponent’s first three service games. Fourth seed Nishikori finally broke for 6-5 though as Carballes Baena suffered his mishap.

“It was frustrating missing on those break points, I twice had 40-0,” Nishikori said. “Mentally it was not easy at all.

The win was the 22nd here for Nishikori, who has won two of his three matches against Medvedev, including the Brisbane final in January.

“Medvedev is a tough player, he’s got a great serve, good reach and he moves well,” said Nishikori.

“I’m expecting many long rallies. I need to play aggressive if I want to have a chance at winning.”

Elsewhere, in Stuttgart, world number one Naomi Osaka battled back from 1-5 down in the final set to reach her first clay court semi-final with a 6-3, 4-6, 7-6 (7/4) win over Donna Vekic in the WTA Stuttgart tournament on Friday.

The win saw the 21-year-old Japanese star making her first semi-final since winning the Australian Open in January, having suffered exits in Dubai, Indian Wells and Miami.

“I just told myself I didn’t want to come away from here with any regrets,” Osaka said on courtside after her dramatic victory. Osaka said she was “stressed out” and “making excuses” before she managed to turn the tables on Croatia’s Vekic. “This is my first semi-final on clay, so it feels pretty good,” she said.

Earlier, world number three Petra Kvitova overcame a rocky start to beat Anastasija Sevastova in three sets and progress to the last four of the WTA tournament in Stuttgart on Friday.

Latvia’s Sevastova sprung a surprise early on, breaking twice to take a 4-0 lead before going on to win the first set.  Yet Kvitova came back to win 2-6, 6-2, 6-3 and reach the last four in Stuttgart for the third time in her career.

“It was really difficult today, but I am very happy to be in the semi-final. I feel good and healthy,” said Kvitova after the match.

Along with Japanese world number one Naomi Osaka, Kvitova is one of the favourites in Stuttgart.