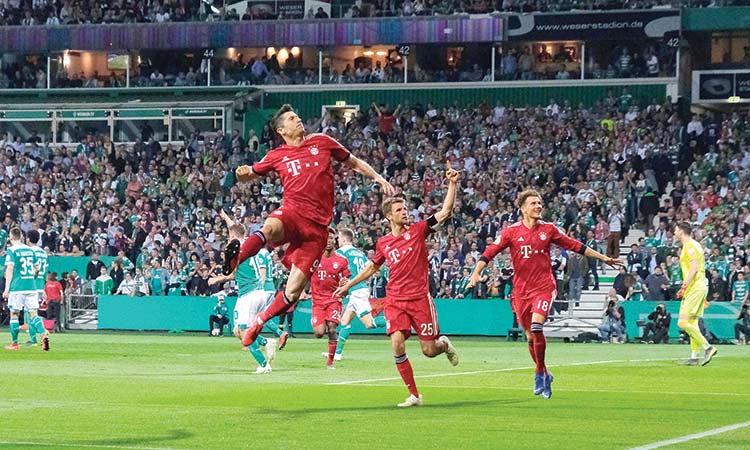 Bayern Munich will face RB Leipzig in the German Cup final next month after Robert Lewandowski fired them to a 3-2 win over a valiant Werder Bremen on Wednesday.

Lewandowski scored twice in a highly entertaining last-four tie to reach the final for the 23rd time.

Bremen were unfazed by their role as underdogs, attacking Bayern all night and briefly overturning a two-goal deficit.

“It was the tough game that we were expecting,” man of the match Thomas Mueller told ARD.

“Football is fun in an atmosphere like this. I have to say, I’m a bit of a Bremen fan. I love watching them, and their fans are great.”

Both sides threw everything forward in the first half, with Milot Rashica in particular causing endless headaches for the Bayern defence.

Lewandowski put Bayern in front on 36 minutes, however, and Mueller appeared to land the sucker punch when he scooped in a second just after the hour mark.

“It was what my friends would call a classic Mueller goal: not much to look at but I enjoyed it,” Mueller told ARD with a laugh.

Rashica, though, hauled Bremen back into the tie with two minutes of magic.

The Kosovan set up Yuya Osako to pull a goal back on 74 minutes, before tearing through Bayern with a brilliant solo run a minute later to net the equaliser.