Coutinho under spotlight vs Sociedad after ‘ugly gesture’ - GulfToday

Coutinho under spotlight vs Sociedad after ‘ugly gesture’ 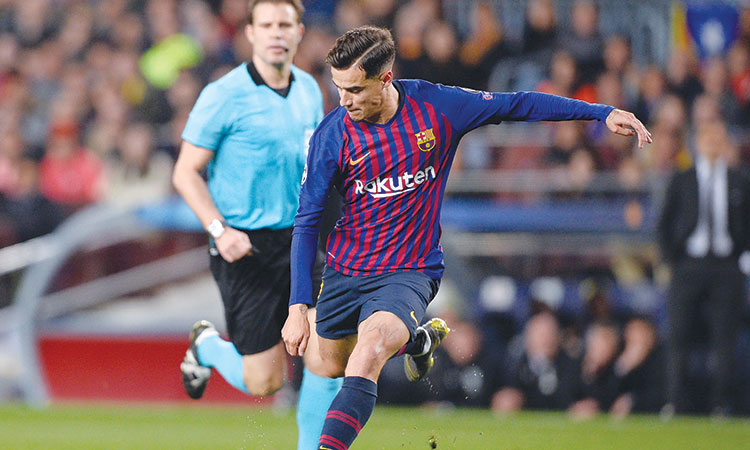 Coutinho will have to emulate the impressive form he showed against United in the remainder of the season to prove his worth. File / Reuters

After confronting fans during Tuesday’s Champions League win over Manchester United, Barcelona’s Philippe Coutinho is under pressure to show some consistency when the runaway La Liga leaders host Real Sociedad on Saturday.

Barca hold a nine-point lead over nearest challengers Atletico Madrid at the top of La Liga with six games left and can further strengthen their grip on the title race with victory at the Nou Camp, where Coutinho will be in the spotlight again.

The Brazilian has largely failed to live up to his club record transfer fee of 165 million euros (£143 million) since joining from Liverpool in January 2018 and his underwhelming displays have seen him booed by Barca supporters.

He has a meagre return of five goals and two assists in 30 La Liga appearances but went some way to vindicating himself by capping a lively display in the 3-0 win over United in the quarter-final second leg with a spectacular long-range strike.

But his pointed celebration, in which he put his fingers in his ears and appeared to mouth insults towards the Barca fans in what newspaper Sport described as “an ugly gesture and a lack of respect”, has left a sour taste.

“It was not a good gesture, he scored a great goal but it’s never good to behave that way to the fans,” former Barca and Brazil forward Rivaldo was quoted as saying by newspaper Marca.

“Fans have criticised him because they know he can do more.

“Barcelona paid a lot of money for him but he’s still not an idol for the fans and he needs to show character and make the difference.”

Spanish media have reported Barca are open to selling the 26-year-old in order to help fund their plans to renew and rejuvenate their outstanding yet ageing squad.

Ajax Amsterdam’s Frenkie de Jong has agreed to join Barca for 75 million euros in June, while Ajax’s Matthijs de Ligt is also predicted to move to the Nou Camp, and Coutinho appears to be a dispensable player who retains a large sell-on value.

Yet if the Brazilian can repeat the impressive form he showed against United in the remainder of the season and help Barca capture a trio of trophies, he could yet convince his club that he is worth keeping.

Barca’s closest challengers Atletico are away to Eibar on Saturday, while third-placed Real Madrid host Athletic Bilbao on Sunday.

Fourth-placed Sevilla visit Getafe, who are one point behind the Andalusians and vying to overtake them to qualify for the Champions League for the first time.

Meanwhile, Barcelona president Josep Maria Bartomeu has spoken out against the idea of staging Champions League games at the weekend, as suggested in a recent proposal to reform the competition.

“Barcelona’s position is clear: national league games must be held at the weekend, and Champions League games during the week,” he said in an interview on Thursday.

Bartomeu did offer broad support for Champions League reform, however, saying that the competition had to develop.

The controversial reform plans put forward by the European Club Association (ECA) in March envisaged dramatic changes to the Champions League from 2024, ranging from the introduction a three-tiered system to the scheduling of weekend fixtures.

The plans prompted widespread criticism, most notably from the Europe’s major domestic leagues, amid fears that they represented the introduction of a European Super League via the back door.