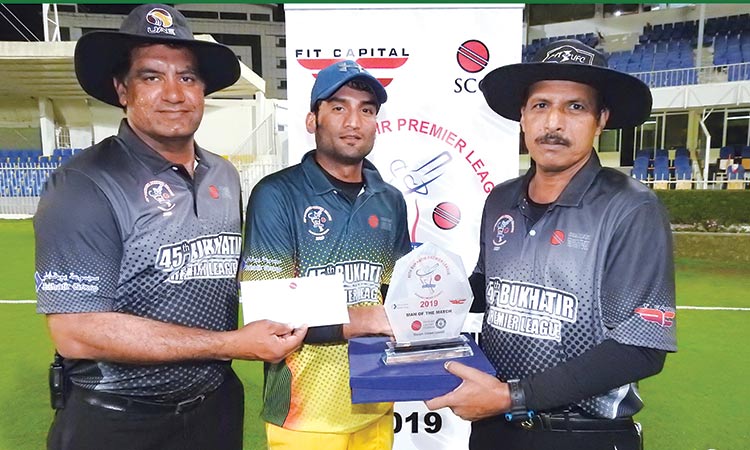 Atlas Foundation’s Waseem Akhtar poses with his Man of the match trophy.

Atlas Foundation bowlers excelled in their win over OMA Emirates in the 45thBukhatir Premier League 2019 match played at the Sharjah Cricket Stadium on Wednesday.

OMA won the toss but Awan was the first to strike when he got rid of Taimoor Ali for 6 before Neeraj Sharma and Prince Panu steadied the innings with a 32 run partnership.

But Awan struck again to remove Panu for 24 and Mehmood sent Sharma back for 25. Before OMA could gather their act together Akhtar trapped Balwinder Singh (1) and clean bowled Ashish Sharma (0) to have OMA reeling on 78 for 5.

Muhammad Amjad Gujjar and Umar Doger revived OMA with 43 runs. Gujjar scored 38 from 56 balls with a six and three fours before he too fell to Akhtar plumb in front of the wicket.

Babar Hussain (26) and Abdul Rehman added 70 runs and that lifted Atlas hopes. Glenn struck again by removing Hussain for his third wicket but Rehman (67) and Shahbaz Rasheed (31) took their team closer to victory before Sulfikar Salim sent both back to the pavilion. Waseem who had done well with the ball came good with the bat too for his 12 runs as Atlas won in 42.1 overs.