World’s top U-16 players to compete for DIFC title 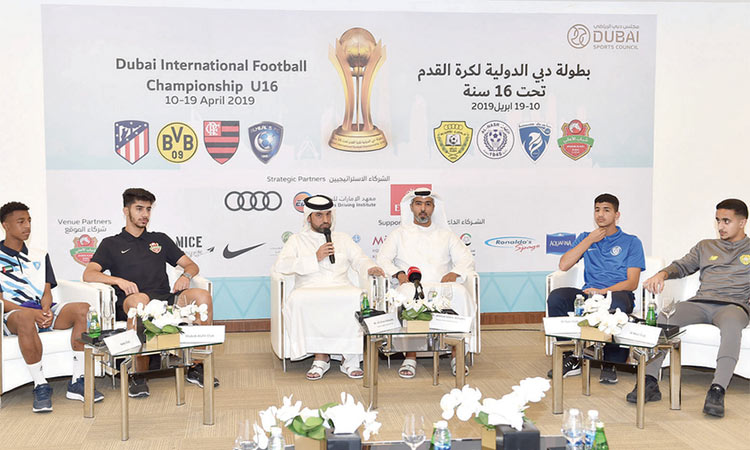 Some of the world’s top young talents will be on show at the Sheikh Maktoum Bin Rashid Stadium in Al Mamzar from April 10-19, including the starlets of Brazil club Flamengo and Spain’s Atletico Madrid, as they challenge for the coveted Under-16 Dubai International Football Championship title.

Flamengo, who won the title on their debut in 2018 defeating Real Madrid in the final, have been drawn in Group B alongside Atletico Madrid, Al Nasr and Hatta, while Borussia Dortmund are in Group A alongside Al Hilal, Al Wasl and Shabab Al Ahli Dubai. Flamengo open against Atletico on Thursday, and one of their strongest opponents will be German side Dortmund currently at the top of the U16 Bundesliga following their 1-0 win over bitter rivals Schalke before travelling to Dubai.

“The emphasis for us will be the experience through which our players can develop both on and off the pitch,” Dortmund coach Karsten Gorges said.

“For all our players it will be a challenge to adapt to the conditions here and play the way they have done so far this season. There are some really tough teams from other clubs and it will be interesting to see how they can tap into their mentality to win matches,” he added.

“This tournament gives us a glimpse into the future,” said Ali Omar Al Balooshi, Director of Sports Development at Dubai Sports Council, at Tuesday’s pre-tournament press conference in Dubai Sports Council. “These U16 players are the generation closest to making that step up to their club’s first teams and their senior national teams, and they will be representing their clubs and their countries in a few years from now, winning trophies and title with them.

“That is what makes this tournament so important and so special - we will be seeing the stars of the future here. Last year, we saw Flamengo’s Reinier Jesus Carvalho steal the limelight here. He was top scorer of the tournament and now, according to media reports, Real are preparing a €70m bid to take him to Santiago Bernabéu. Hopefully, we will see another star make an impact here this year.

Reinier is currently a member of Brazil’s U-17 squad where he plays as a traditional No10, but he is yet to break into his club’s first team.

“Speaking from a UAE and Dubai perspective, this tournament meets one of our strategic objectives, which is to develop the football sector, especially at the grassroots level. Our young players have been getting the opportunity to play against some of the best young talents and many of them have gone on to represent the national team.

“Besides the obvious technical benefits of competing against the best players from a young age, this tournament also serves to boost their confidence and in the future, when they come up against these same players, they will not be in awe, knowing they have played against them in the past.”

Ahmed Salem Al Mahri, Manager of DSC’s Sports Academy section, added: “One day soon, hopefully, we can proudly say we were sitting on the same dais with these players. This is what makes this tournament so special.

“For our local young players, it provides an invaluable experience and an opportunity to compete against some of the best players from around the globe and learn from them. For our coaches, this is an opportunity to get up close with coaches from these top professional clubs, belonging to different schools of football, and gain from the experience.”