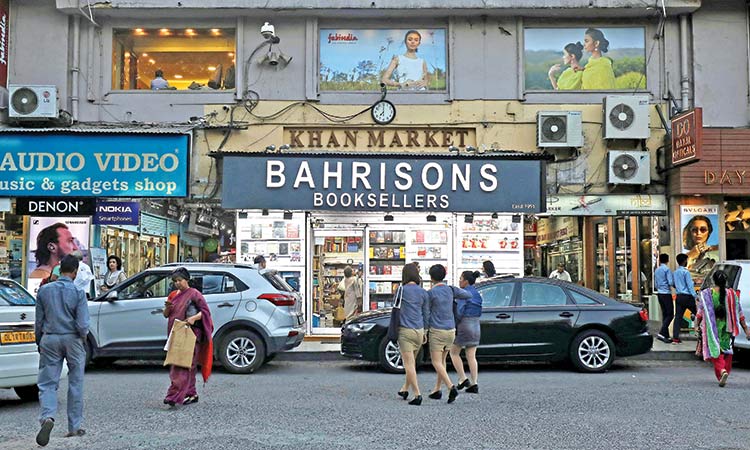 Shoppers are seen at Khan Market in New Delhi. File/Reuters

Since the 1950s, three words whose definitions have been altered to suit political gain by the Nehruvian and later Leftist idealogues are Liberal, Secular and Activism. Anyone not subscribing to the perspective of these words is a pariah. Who has determined that these words mean not what they were supposed to but something quite apart because a group of Fabian and Marxist intellectuals so decreed? Every political ideology has a relevance and context to the times its proponents live in.

Human ingenuity and social progress are a dynamic reality beyond ossified pedagogy and doctrines. When a thinking elite, in itself a contradiction of popular ideology, appropriates often through state patronage, academic nepotism or sheer absence of another perspective, all public discourse its the beginning of the end of this exclusive club. Convenient parallels are drawn selectively from say 100 years of recent history rather than taking a longer historical perspective.

Let›s jump cut to 2014 and now. For the first time, a leader who has never been close to the rarefied stratosphere of power and was definitely not a member of the club had come from behind and seized the throne in Delhi. Artistes, one part of media, academicians all went berserk messaging one another that our India is ruined. Our freedom has gone. Look the Sanghis are being co-opted in every institution. What will happen to secularism? Forgetting India has never ever till Independence been a secular state. Did not the early invaders from the Turks to the Mughals practise a state religion — Islam — in a country where 80 per cent of the population was Hindu since 3000 BCE? Did the BJP government ever talk of making Hinduism the state religion? Sure there are fringe lunatics screaming rubbish all the time but such mavericks have existed in every age. Has any law favouring the majority been passed in the last five years which has taken away any privilege granted to a community?

Another common complaint is that all the institutions are packed with Rightwing activists. Well, weren›t they packed with Left-leaning people since the 1950s? How many BJP (Jana Sangh), Swatantra Party, PSP, Shiv Sena, BSP, Alkalis and other regional parties or DMK supporters were a part of any government organisation? Obviously, these are political appointments they have and will change when a different government comes to power. Again let›s take academia. Why is it that only the Left-leaning economists and sociologists, artistes and media are consulted and quoted? Why is it that Rightwing economists or intellectuals (a fewer in number for sure) are decried?

Secular and liberal are two words conveniently appropriated by a loose grouping whose only common agenda is Modi Hatao. Who says a history book once written half a century ago is Gospel? Who says the data being flaunted by the opposition and its cronies in the media be taken as the only facts? What makes, for example, CMIE to be the only credible data collection agency? Why are Amartya Sen, Raghuram Rajan, Kaushik Basu and their ilk the only repository of knowledge? Why dismiss views of Arvin Panigarhia, Meghnad Desai and Bibek Debroy?

If you read A.L. Basham then why ignore R.C. Majumdar? If you read Irfan Habib, why reject Sanjiv Sanyal? If there is Ramchandra Guha, there is Makarand Paranjape. Why should Prasoon Joshi be called a sarkari poet when for generations Leftist poets have sung paeans for the Nehru-Gandhi government. Why should Kangana Ranaut be laughed at and Swara Bhaskar (a far lesser actor) be eulogised? Why should some writers and directors be considered kosher because they hate BJP and Modi? If others believe in Modi they are promptly dubbed bigots. This fake divide is what led the so-called honest media and intellectuals and thinkers misread the last five years. By all means condemn, criticise and even damn Modi and his government but is your version by all means the only truth? People who talk of polarisation forget that one point only one point of view never polarises by itself. It takes another side to take the other pole.

The mobile and internet revolution of the last 10 years has created a re-networked society. For the first time in human history almost two-thirds of the world›s (and India›s) people have access to information. Social media is the voice of the people. However what must be noted (I have written about this at length earlier) that the mudslinging, partisan and hyperbolic euphoria and fear are limited to a mere 10 per cent of Indians who are on social media.

Ninety per cent of Indians are busy playing ludo, Tik Tok, PubG or watching YouTube and posting messages and pictures from their mundane personal lives. Outdated image consultants sit on TV panels and discuss ad nauseum about online media and its influence without a clue, citing inane jargon borrowed from out of context foreign writings.

No wonder, both social media and news media are inconsequential in 2019 realpolitik. It›s time that a ‹manthan› of Indian media and public discourse takes place and cleanses it of shouting, prejudice, bias, hate and yes over the hill overpaid mediapersons. No one gives news but opinions. A dozen cross-talking bunch of has-been hacks. No doubt the economy is not doing its best but growing at 6.5 per cent per annum on a global scale is good. Besides, the amount of informal jobs created in the country in the last five years by technological change is not counted for in any survey.

If the digital economy in India, including e-commerce, travel, entertainment and other services is worth over $300 billion, where is this money going? This and misreading the other realities on the ground (like the success of Jan Dhan and other welfare schemes) has made the whole intellectual debate centred around Modi. Mere wishful thinking about the rise of the opposition is an Alice in Wonderland moment.

The global axes — economic, social, political — has shifted. This has resulted in an upheaveal of accepted norms and conventional wisdom. The majority everywhere is asserting its rights but if you ask me the minorities will continue to enjoy the same privilege which any other citizen gets. I don›t think any anti-minority law will be passed. In fact, the minorities may actually get some more now. My secularism is indifferent to religion. My liberalism is what I believe in as long as I don›t snatch away the right of others to express themselves (within the confines law). I may not agree with their assumptions and modus operandi but I can›t deny there is a seminal change.

“Geopolitics is ultimately the study of the balance between options and limitations,» says the American scholar Peter Zelhan. The Khan Market club will be reconstituted and some of the old champions will give way to newer ones. Those who do not like it, please form another club but feel free to buy the land for it yourself. You can live in denial or in hope. The choice is yours. For me, I don›t believe in Pralay, Qayamat or Doomsday. The gravy train will no longer carry the same passengers or baggage. That›s the big change. Time for a large number of people to rise and smell the coffee.