May’s political demise was two years in the making - GulfToday

May’s political demise was two years in the making 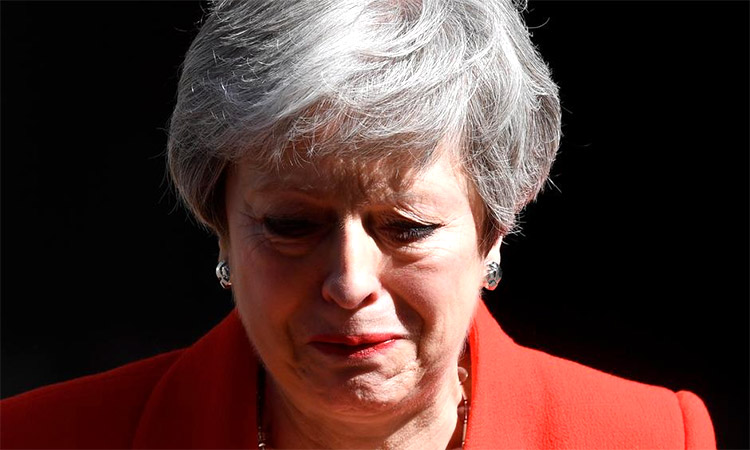 It has been clear for some time that May wouldn’t last the summer. The start of the leadership tussle can be traced back to 10pm on 8th June, 2017 — the moment that exit poll indicated the loss of her party’s majority after her snap election that went badly wrong. Her demise has been two years in the making. And she can now repent at leisure about where it went wrong.

The question we might want to ask is whether any of her would-be successors have shown a willingness to learn from her mistakes, or if they (unwittingly or otherwise) seek to compound them.

Already, two broad divisions are opening up among the ranks of leadership candidates, groupings you might refer to as Deal and No Deal. Of the former, Rory Stewart was the first to hit the studios, telling BBC Breakfast that a no deal scenario would be catastrophic for the country, and what he offers is an understanding of negotiation and compromise. On the No Deal side, you have Dominic Raab, Esther McVey and Andrea Leadsom as the bulk of the hopefuls. The thing uniting them is less a relationship to the realities of the UK’s position with the EU, but how their rhetoric might catch in the ears of the Tory faithful. If this means ignoring the world outside of the Tory party, and offering a pitch about how everything must be wonderful after a no deal Brexit because, well, we’re Britain, then they’re going to run with it. Apart from Brexit, what else do they have to sell? The biggest beast in the no deal jungle is, of course, Boris Johnson. His approach to Brexit so far is little more than demanding the EU accept his idea of a deal, whatever that might be, or we will saw off our leg. Unfortunately, his pronouncements have to be taken seriously. Indeed, if he is one of the two names the Parliamentary Conservative Party puts forward to the membership he will, short of getting snapped out on the raz with Jeremy Corbyn, walk the election.

As far as Labour are concerned, the party should be (relatively) relaxed about a Johnson leadership precisely because his project, such as it is, presents more of the same. They should know what is coming. The honourable member for banter is no longer the rock star he once was, and has had to spend the last 18 months grubbing around for attention by writing the same weekend article for The Telegraph and reminding the rest of the world of his existence with carefully calibrated outbursts of racism. Once in Number 10, perhaps Johnson thinks carrying on “saying the unsayable” is going to win him support. After all, it has not done Nigel Farage much harm. But deciding to alienate a good chunk of the electorate is hardly smart politics.

But where Johnson could really come unstuck is Brexit. The polling surge for the Brexit Party, at least to his eyes, demonstrates there is a viable coalition of voters the Tories could meld together to win a general election. Upping the no deal rhetoric would undoubtedly win some over from Farage’s party, and adding those to the Tory base gives Johnson more than 40 per cent of the electorate.

There are three problems with this theory. There are Brexit Party supporters who will never vote Conservative, regardless of the deal (or no deal) Johnson comes up with. This was a lesson of the 2017 general election, when a portion of the Ukip vote flowed back to Labour, and this incident has already seemingly fallen down the Tory memory hole.Second, using Brexit — and a no deal Brexit at that — as a partisan issue is not likely to win back relatively moderate Tory voters who tended toward the Liberal Democrats in the local elections, or stayed home. According to YouGov, 39 per cent of Tory voters supported remain in the EU referendum. That doesn’t automatically mean they want a second referendum or for Article 50 to be revoked, but it does make them more disposed than leave voters toward a deal as a sign of sensible politics.

And lastly, there is the figure of Johnson himself. The transition from banter to boorish has polarised opinion, which hampers his ability to build a coalition of voters and gives his Labour opponents a point to rally against. Even Rory Stewart has said he would not serve in a Johnson cabinet because of Johnson’s no deal stance and basic lack of honesty, which is all grist to the opposition mill.

Added to Johnson’s “gaffes” and his polarising personality, it looks like he is setting himself up to fail.