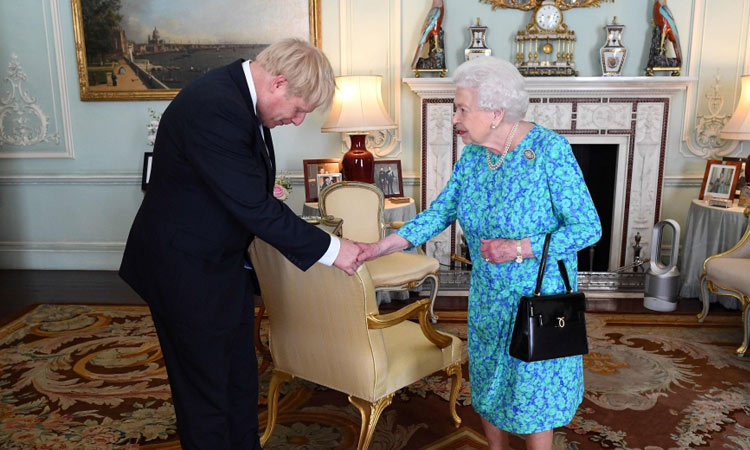 Queen Elizabeth II welcomes Boris Johnson during an audience in Buckingham Palace on Wednesday, where she invited him to become Prime Minister and form a new government. AFP

Boris Johnson took over as Britain's prime minister on Wednesday, promising to pull his country out of the European Union on Oct.31 by any means necessary.

His ascent is the culmination of a lifelong ambition for the blond-haired politician, who delights in playing the clown but now faces an immense challenge ahead.

Johnson has promised to deliver Brexit in three months' time but faces opposition in Brussels and has only a wafer-thin majority in the British parliament.

Beloved by many for his refusal to take life too seriously, he is accused by others of divisive rhetoric, a flexible approach to the truth and incompetence.

Before he even took office, several pro-European ministers quit in protest at his threat to leave the EU without a divorce agreement to ease the split. 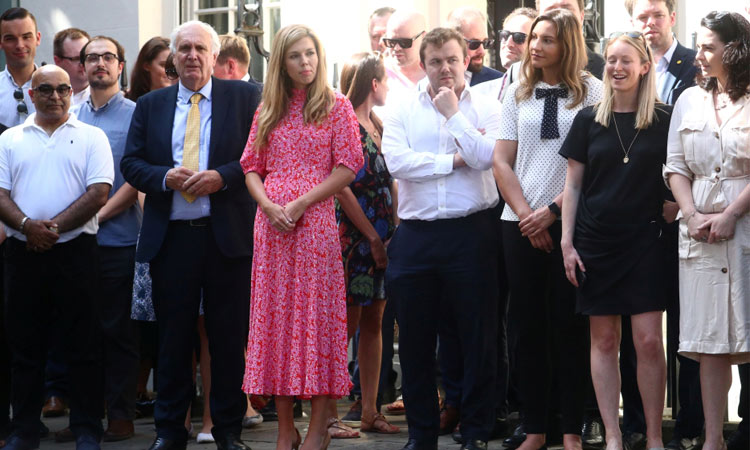 Opposition Labour leader Jeremy Corbyn challenged Johnson to call a snap general election, saying he has no mandate from the public to govern.

Although he won a landslide of Conservative party members, a YouGov survey Wednesday found Johnson's approval rating was just 31 percent among the public.

Even his appointment was disrupted by climate protesters, who briefly stopped his convoy heading to Buckingham Palace to be nominated by Queen Elizabeth II.

Johnson is expected to swiftly announce his new cabinet, and his first appointment proved predictably contentious.

He named as a top adviser Dominic Cummings, a combative character who helped lead the victorious "Vote Leave" campaign during the 2016 EU referendum.

May resigned after failing to get her plan for leaving the EU through parliament, forcing her to twice delay Britain's departure date.

Johnson has vowed to renegotiate her deal or take Britain out of the bloc at the next deadline, Oct.31, without any agreement with Brussels.

But the EU refuses to reopen the text, while some of his own MPs have said they might even bring down the government rather than accept a damaging "no deal" exit.

May took over three years ago promising to deal with the "burning injustices" in society, but leaves behind a divided party, country and Brexit in doubt.

In a short speech in Downing Street, before tendering her resignation to the queen at the palace, she wished Johnson "every good fortune."

A heckler shouted "Stop Brexit" as she stood with her husband Philip by her side, to which she retorted: "I think not."

But she emphasised that Brexit should be done "in a way that works for the whole United Kingdom", amid fears a disorderly divorce could cause irreparable damage to ties between England, Northern Ireland and Scotland.

Brexit aside, the most immediate problem facing Johnson is a stand-off with Iran after Tehran seized a UK-flagged tanker in the Gulf last week.

The current foreign secretary, Jeremy Hunt, was Johnson's rival for the leadership and is not expected to keep his job, although he may stay in cabinet.

May's government also provoked the ire of US President Donald Trump this month with the leak of diplomatic cables criticising the White House.

Johnson has emphasised the importance of Britain's relations with the United States.

And Trump was one of the first to congratulate Johnson on his victory saying he would be "great" and describing him as "Britain Trump."