After much fuss Trump backs away from border closing - GulfToday

After much fuss Trump backs away from border closing 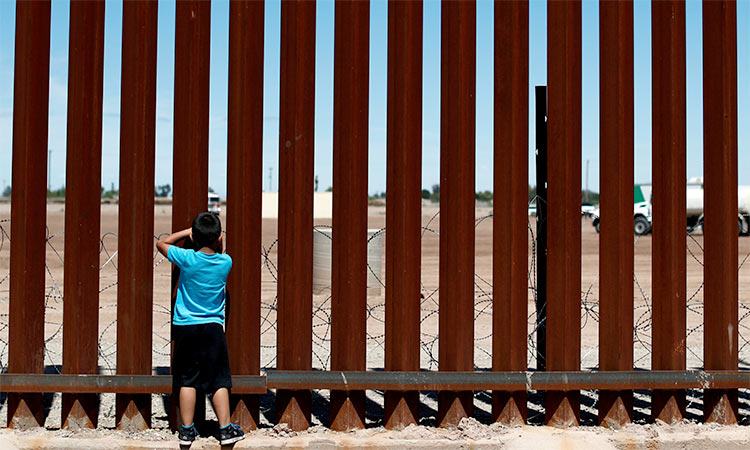 A child looks through the border wall during the visit of US President Donald Trump to Calexico, California, as seen in Mexicali, Mexico. File/Reuters

He was “not kidding around,” Donald Trump said. This was going to be the week, he vowed, that he would shut the southern border if Mexico or the Democrats in Congress or somebody didn’t do something about migrants and drugs coming in. “This is a National Emergency!” he tweeted on Wednesday. So when, then, would he issue the order? Thursday? Friday? Saturday?

“We’re going to give them a one-year warning and if the drugs don’t stop or largely stop, we’ll put tariffs on Mexico and products, in particular cars, and if that doesn’t stop the drugs, we close the border,” the president said Thursday.

Later in the day, he asserted he’d already gotten something. Mexico “in the last four days, has really done a great job on their southern border — with Honduras, with Guatemala, with El Salvador — of grabbing and taking and bringing people back to their countries,” Trump told reporters. Mexican authorities, however, said they have not altered their enforcement policies.

There was no clear indication Trump had accomplished anything except to cause a scare of economic disaster if he disrupted a flow of goods and services that, according to the US Chamber of Commerce, amounts to almost $1.7 billion daily.

He did accomplish this: Bloomberg News reported a 34 per cent spike in the price of avocados — 80 per cent come from Mexico — and restaurant owners told MarketWatch they were forced to raise prices or reduce portions.

Trump is settling into a messy pattern, writes Newsday’s Dan Janison. Evoking a crisis, he threatens a risky, imminent move that worries even his allies. Then he withdraws the warning, replacing it with another warning of decisive action at some future time.

This keeps most of his fans convinced of his resolve, while critics can be glad the threat went nowhere. Trump still got everyone to pay attention to the drama because for this president, the show is the thing, while a deep examination of his logic is not.

Take his new threat for example. It includes new tariffs on automobiles in one year if Mexico doesn’t stem the flow of drugs and migrants. But tariffs were actually the subject of a recent agreement with Mexico awaiting ratification by Congress. How Trump would reconcile that is anyone’s guess.

But bluffing and winning nothing have no cost with his base until and unless those who agree with his overall goals stop believing.

New intrigues over Mueller report: Reports that some of Robert Mueller’s investigators are privately complaining that Attorney General William Barr sanitized their findings have put the Justice Department on the defensive as the Democrats’ clamor to see the whole report grows louder.

“It looks like he [Barr] is trying to hide information, rather than be forthcoming, as he promised,” said House Intelligence Chairman Adam Schiff. “Just show us the Mueller report, that’s all,” said Speaker Nancy Pelosi.

The New York Times and The Washington Post reported that Mueller team members told associates that their report contained “acute” evidence that Trump obstructed the Russia investigation, though Mueller did not render a final judgment on that charge. “There was immediate displeasure from the team when they saw how the attorney general had characterized their work,” one US official told the Post.

Mueller’s office had prepared summaries for different sections of the report with a view that they could be made public, the official said. Instead, Barr released a thinner, four-page synopsis. A person familiar with the investigation pushed back to the Times that Mueller’s summaries contain sensitive information like classified material and secret grand-jury testimony.

A Justice Department statement said Barr decided to get his bottom-line findings out quickly “given the extraordinary public interest in the matter” and is working with Mueller “on appropriate redactions ... so that it can be released to Congress and the public.” For more, see Newsday’s story by Figueroa and Tom Brune.

Talkin’ ‹bout his generation? Democratic presidential contender Pete Buttigieg pitched himself Thursday as the “new generation” leader who would work to reverse historical discrimination against black Americans by adopting policies to lift the community in the years to come.

Buttigieg, 37, the mayor of South Bend, Indiana, spoke to the annual convention of the Rev. Al Sharpton’s National Action Network.

He touted higher homeownership rates among African-Americans as a means of building “generational wealth” and also focused the areas of enterprise, health, education and justice. He supported a bill by Rep. Sheila Jackson Lee (D-Texas) bill to form a commission to study reparations as an atonement to African-Americans for slavery. See Newsday’s story by Emily Ngo.

Trump raises a Cain: Trump confirmed Thursday he is planning to nominate Herman Cain, a former pizza company CEO who gained brief fame as an early Republican contender in 2012, to a seat on the Federal Reserve, as reported earlier by Axios and Bloomberg News.

Cain has relevant experience. From 1992 to 1996, he served as a director of the Federal Reserve Bank of Kansas City, as well as deputy chairman and then chairman.

But he showed a quirky persona on the political stage, touting a gimmicky “9-9-9” plan for tax rates and memorably brushing off questions about his foreign affairs knowledge with, “When they ask me who is the president of Ubeki-beki-beki-beki-stan-stan, I’m going to say, ‹You know, I don’t know.’ Do you know?” He quit the campaign after he was faced with multiple sexual harassment allegations.

The prospect of Cain on the Fed drew the support of a Republican senator from his home state, David Perdue of Georgia, and bemusement from another, Richard Shelby of Alabama. “It’d be interesting,” Shelby told a Wall Street Journal reporter. In what way? “Probably in all ways.”

Cohen plea: Former Trump fixer Michael Cohen is asking Democrats in the House to put in a word for him and seek a delay and maybe even a reduction of his looming 3-year prison sentence. His legal team said Cohen is sorting through millions of documents he’s gotten back from federal investigators that might be of interest for the Democrats’ probes.

“To date, Mr. Cohen has located several documents that we believe have significant value to the various congressional oversight and investigation committees,” wrote the attorneys, Lanny Davis, Michael Monico and Carly Chocron. He won’t be able to finish the review, they said, if he reports to prison as scheduled on May 6.