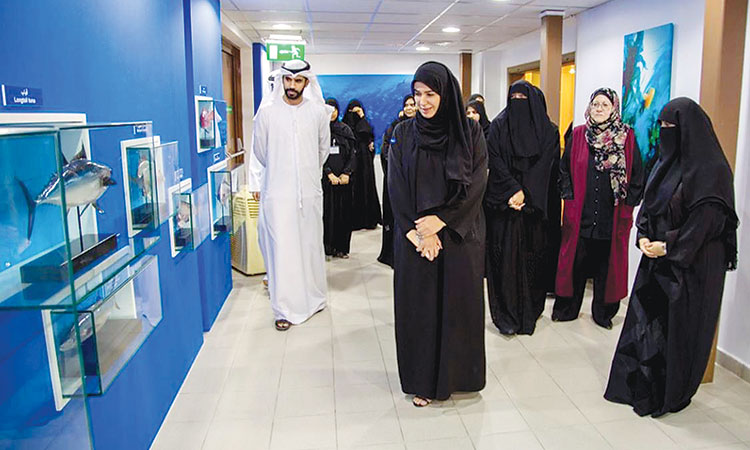 The Natural History & Botanical Museum will open a new Gulf Fish Section to highlight the different species of fish in the Arabian Gulf.

The Environment and Protected Areas Authority’s (Epaa) Natural History & Botanical Museum organised a special event entitled ‘Together We Can Protect and Restore Our Oceans’ on the occasion of World Oceans Day. The event was held recently at the Museum with the participation of staff, visitors to the museum and representatives from a number of government agencies.

Hana Saif Al Suwaidi, Epaa Chairperson, said, “The attendees participated in and  appreciated the event. It was organised to raise awareness about the importance of preserving marine life, species of fish, migratory fish and breeding seasons in order to encourage people to refrain from fishing during breeding seasons.”

Mrs Al Suwaidi explained that the Museum will open a new Gulf Fish Section to highlight the different species of fish in the Arabian Gulf in celebration of World Oceans Day.a

World Oceans Day is celebrated to remind us of the oceans’ importance to humans. They are considered the lungs of the planet because they provide most of the oxygen that we breathe. It is also important to preserve the oceans and refraining from polluting them because, in addition to their aesthetic value, they are a primary source of food and medicine and vital to the environment.

The idea for World Oceans Day was first proposed at the Earth Summit in Rio de Janeiro, Brazil, in 1992. The Day helps to raise awareness about the oceans’ importance, status and wealth of resources and the need for sustainable development. According to statistics, oceans cover three quarters of the Earth, contain 97 per cent of the water on Earth’s surface, and represent 99 per cent of the planet’s living space by volume.

The meetings were held from 8th to 10th March, in association with the European Association of Zoos and Aquaria, EAZA.

Taking place at the Breeding Centre for Endangered Arabian Wildlife, the workshops brought together European specialists tasked with the preservation and analysis of feline captive population management and conservation around the world and discuss practical and effective ways to preserve the feline species.