Rains could continue until Saturday: NCM 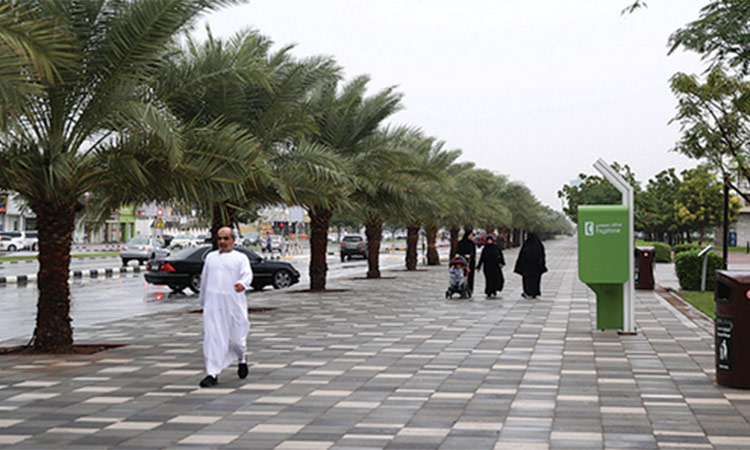 A group of women enjoy the cool weather after a rainy day.

Rains of different intensity continued to fall in most of the country on Tuesday due to an extension of surface low pressure, associated with an upper air trough northwest that has been affecting the country since last week, according to the National Centre of Meteolrogy (NCM).

It was medium in Dubai, Ras Al Khaimah, Dibba Fujairah, and Khalifa City in Abu Dhabi, as well as many areas in the Emirate of Sharjah, but it was light to medium in Al Ain. The Emirate of Umm Al-Quwain witnessed medium to moderate over several areas, especially Sheikh Mohammed bin Zayed Street, which led to the accumulation of water in roads and low areas. This also led to lowering temperatures, as the sky is still cloudy and more rain is expected.

The NCM has also indicated that the weather today (Wednesday) will be partly cloudy in general, with some rainy convective clouds over scattered areas of the country. Humid by night and Thursday morning over some internal areas. Moderate to fresh southeasterly becoming northwesterly winds, causing blowing dust and sand with poor visibility at times with a speed of 20–30, reaching 50km/hr. Sea will be rough in the Arabian Gulf and moderate be coming rough at times with clouds in the Sea of Oman.

While on Thursday, it is expected to be fair to partly cloudy in general. Humid by night and Friday morning over internal areas and fog or mist might form. Light to moderate northwesterly to northeasterly winds, with a speed of 16–26, reaching 36km/hr. Sea will be moderate in the Arabian Gulf and in the Sea of Oman.

The Centre further pointed out that the clouds and chances of rain would continue until Saturday.

Separately, the Sharjah Municipality stressed its keenness to enhance the flow of traffic, and to provide all necessary services and facilities for the public, especially during the weather fluctuations. It provides filed emergency teams supported with all equipment, to deal with water accumulations or any other emergencies that may arise and respond to them ASAP. It also urges the public through its various channels to exercise causation during such circumstances, warning of some practices that pose a danger to members of society, such as driving quickly on wet streets or using the phone while driving.