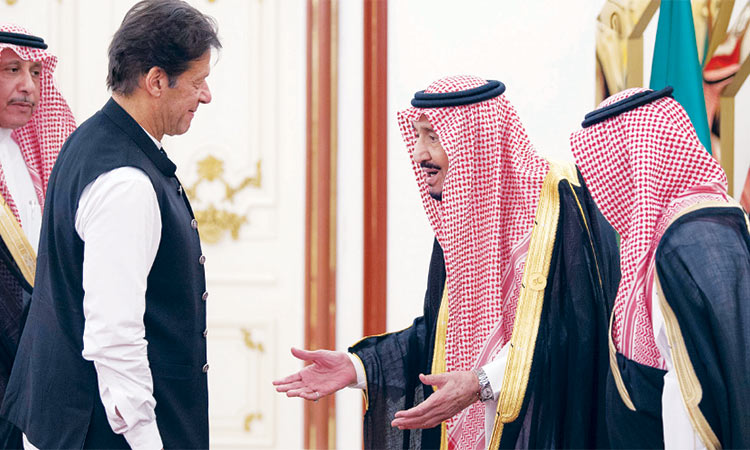 King Salman Bin Abdulaziz welcomes Imran Khan at the opening session of a summit of the 57-member Organisation of Islamic Cooperation in Makkah on Saturday. Agence France-Presse

Speaking at the 14th Summit of OIC in Makkah, the prime minister called on the OIC to stand up against the oppression of Palestinians, Kashmiris and Muslims in the world.

“The Kashmiris are making a political struggle for their freedom and they must be given their right to self-determination,” he added.

“The OIC needs to stand for the sentiments of the Muslim world and make it known to the world how much love and respect we have for our Holy Prophet (Peace Be Upon Him),” the prime minister said.

He further said the blasphemous acts against the Holy Prophet (Peace Be Upon Him) in the western world was the failure of the OIC for not being able to explain to them the love and affection the Muslims have for him.

“It is up to us to explain to the western people the amount of pain they cause us when they ridicule or mock our Holy Prophet. I want to use this forum to talk to the OIC about explaining to the West that their idea of freedom of expression hurts the sentiments of Muslims across the globe. Just the way the Jewish community has made no space for error when it comes to the Holocaust,” Imran said.

Moreover, he said, the western world has equated Islam with terrorism which had done a tremendous disservice to the Muslim community.

“Religion has nothing to do with terrorism. No religion allows the killing of innocent human beings This has led to Islamophobia. The moment that is referred to define terrorism, the people in the west could not distinguish between a moderate Muslim and a radical Muslim,” the prime minister added.

Suspicions, he further said, has been raised against the whole Muslim world.

“The shooting of 50 Muslims in two New Zealand’s mosques happened because they could not understand that Islam had nothing to do with terrorism,” he added.

“Besides Islamophobia, the OIC’s inability has also led to the delegitimising the Muslim political freedom struggles which have been termed as Islamic radicalism,” the premier added. The prime minister stressed the need for the Muslim world to use the OIC platform to “delink terrorism with Islam.”

The prime minister further said the Muslim world was not paying much attention to science and technology despite being on the verge of another industrial revolution with the artificial intelligence and blockchain new technologies coming in.

“We must not be left behind again. We as a Muslim world must spend more of our resources in strengthening ourselves in this field. We must pay more attention to quality education in universities,” he added.

Speaking about the Palestine-Israel issue, the prime minister said there was no solution to the Palestine issue except the two-state solution.

“East Jerusalem must become the capital for the Palestinian people and the Golan Heights must be returned as per the 1976 borders as agreed by the international community.”

In an unrelated development, several Pakistan Tehrik-e-Insaf (PTI) ministers and members of Parliament have conveyed their disapproval to President Dr Arif Alvi and Imran Khan over the government’s filing a reference with the Supreme Judicial Council (SJC) against reputed Supreme Court judge Justice Qazi Faez Isa.

Even President Alvi was unhappy but he had to act on the advice of the prime minister, said a report quoting unnamed sources.

The president had to modify the language of the reference, which was worded harshly by the Law Ministry.

A number of PTI ministers and MPs have conveyed it to both Alvi and Khan that this is wrong and what government did was not well thought-out. The PTI in general is against the government’s move against Justice Isa, sources said.