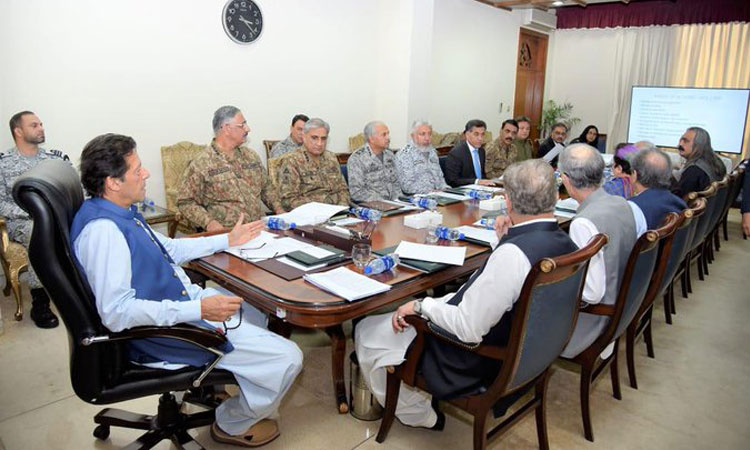 Imran Khan chairs a National Security Committee meeting along with armed forces chiefs and other government officials in Islamabad on Wednesday. AFP

Pakistan announced on Wednesday that it is expelling the Indian High Commissioner and suspending bilateral trade with its nuclear-armed neighbour, days after New Delhi stripped the disputed Kashmir region of its special autonomy.

"We will call back our ambassador from Delhi and send back their" envoy, Foreign Minister Shah Mehmood Qureshi announced in televised comments, while a government statement declared that Pakistan will suspend trade in a downgrading of diplomatic ties between the arch rivals.

He spoke as the government released a statement declaring that Pakistan will suspend trade with India in a downgrading of diplomatic ties between the arch rivals.

Islamabad also vowed to take the matter to the United Nations Security Council. 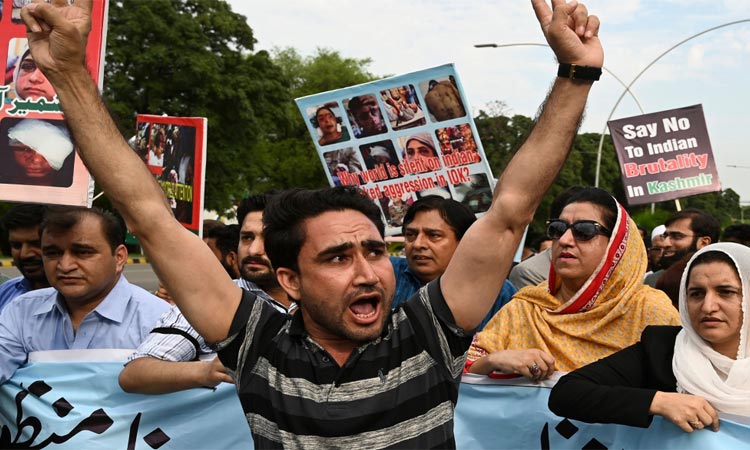 Monday's decision by the government of Indian Prime Minister Narendra Modi to tighten control on Muslim-majority Kashmir had been widely expected to trigger conflict with Pakistan and reignite an insurgency that has already cost tens of thousands of lives.

Earlier during the day, the National Security Committee (NSC) on Wednesday decided to downgrade diplomatic relations with India, suspend bilateral trade, review bilateral arrangements and take the annexation of occupied Kashmir by India to the United Nations, including the Security Council.

Prime Minister Imran Khan chaired the NSC deliberations, which continued for more than three hours. The NSC discussed situation arising out of unilateral and illegal actions by the Indian government, situation inside Indian Occupied Jammu and Kashmir and along Line of Control (LoC). 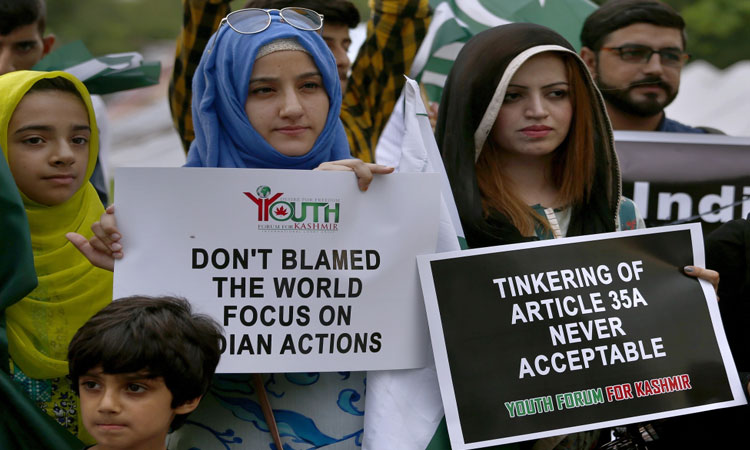 Members of the Youth Forum for Kashmir attend a demonstration to protest India's policy on Kashmir in Islamabad. AP

The prime minister directed that all diplomatic channels be activated to expose brutal Indian racist regime, design and human rights violations. He directed the armed forces to continue vigilance.


Pak has option of approaching ICJ on Kashmir issue: Minister

Pakistan's Information Minister Fawad Hussain Chaudhry on Wednesday said that Islamabad can approach the International Court of Justice (ICJ) against the Indian government's move to scrap special status for Jammu and Kashmir.

While talking to a private news channel, Chaudhry said that Pakistan would never tolerate the "unilateral decision" taken by India on Jammu and Kashmir.

The minister said that if war was imposed on Pakistan, a "befitting response would be given to India".

"We are also approaching the UN Security Council over issue," Chaudhry was quoted as saying by Dunya News.

Pakistan's former President Asif Ali Zardari on Wednesday said the Indian government's decision to scrap special status for Jammu and Kashmir was as serious as the "East Pakistan tragedy."

The Pakistan Peoples Party (PPP) leader made the comment while addressing a joint session of parliament for a second day to discuss Islamabad's future course of action in the wake of India's move on Kashmir.

"The Kashmir issue is the second major incident after the separation of East Pakistan. The Pakistan Peoples Party was formed for the cause of Kashmir. Zulfiqar Ali Bhutto, after negotiations, took back the land from (former Indian Prime Minister) Indira Gandhi," Zardari was quoted as saying by Geo News. 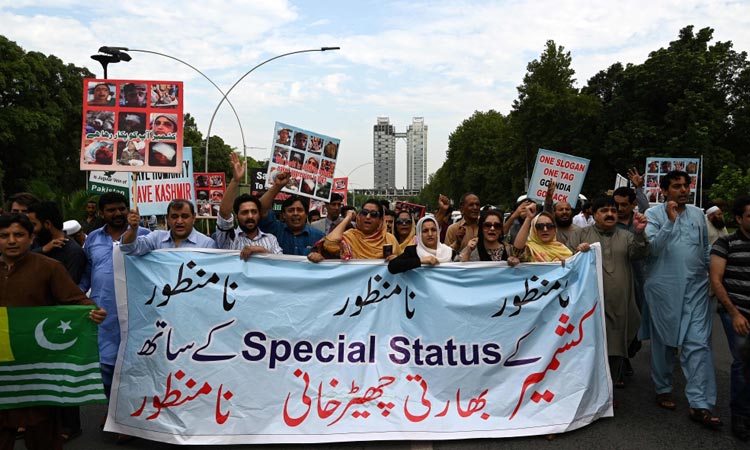 "India will be divided because of (Prime Minister Narendra) Modi's thinking. Muslims of India and occupied Kashmir now understand the two-nation theory of Quaid-e-Azam," Zardari said during the joint session.

"Does India not know there is tailor-made democracy in Pakistan?" he questioned.

"If this situation had happened during my tenure, I would have gone to the United Arab Emirates, China, Russia and Iran. We should keep our friends (close)."

"I am hopeful that Modi's thought process will itself lead to the disintegration of India as he has buried the secular India that Nehru and Gandhi had envisioned," said the former President.