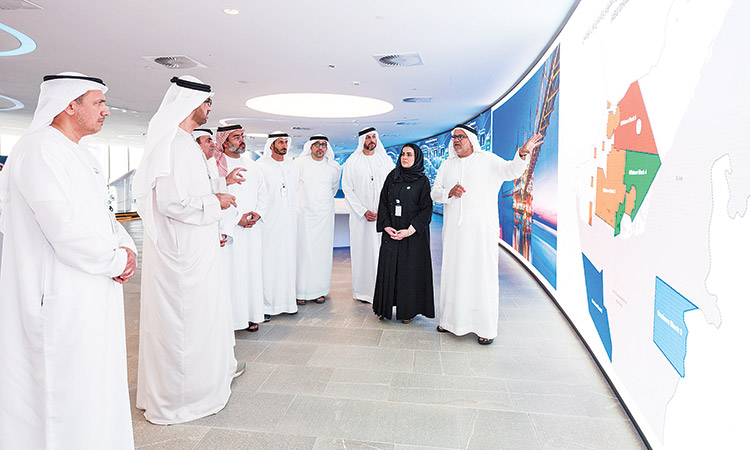 A briefing in progress in Abu Dhabi on Wednesday.

The Abu Dhabi National Oil Company (Adnoc) announced on Wednesday — as part of Abu Dhabi’s block licensing strategy and on behalf of the Supreme Petroleum Council (SPC) — the details of the second round of five new geographical oil and gas blocks open for bidding for both conventional and unconventional resources.

The successful bidders will enter into agreements granting them exploration rights and, provided that defined targets are achieved in the exploration phase, will be granted the opportunity to develop and produce any discoveries, under terms that will be set out in the bid package.

This second licensing bid round follows the conclusion, in March, of the award of the blocks in Abu Dhabi’s highly successful debut competitive exploration and production bid round, which covered and area of approximately 30,000 km2 and generated significant interest from prospective international bidders, reinforcing the international community’s confidence in the UAE’s trusted and reliable investment environment.

The blocks in the first licensing bid round and this second bid round collectively cover approximately two-thirds of Abu Dhabi’s territory, marking a major advancement in how Abu Dhabi is accelerating the exploration and development of its huge untapped resource potential, outside the immediate production areas.

The second licensing bid round offers new areas with significant amounts of conventional and unconventional oil and gas potential. In addition, one of the blocks offered — Offshore Block 3 — is, area-wise, the largest block offered by Abu Dhabi in both the 2018 and 2019 block bid rounds, with an area of more than 11,000 km2.

Dr. Sultan Bin Ahmad Sultan Al Jaber, Minister of State and Adnoc Group CEO, said, “The launch of Abu Dhabi’s second licensing bid round builds on the momentum of the first and very successful competitive bid round. It demonstrates how Adnoc’s expanded approach to partnerships is enabling us to utilise value-add partnerships and smart technologies to drive new commercial opportunities and efficiently accelerate the exploration and development of Abu Dhabi’s untapped resources, in line with the leadership’s directives.

“This second bid round provides the next major opportunity for both new and existing partners, with best-in-class exploration technology and expertise, to join us in further unlocking Abu Dhabi’s substantial hydrocarbon resources in the UAE’s trusted and reliable investment environment. It signals both Abu Dhabi’s and Adnoc’s ongoing drive to realise the potential of our resource base to remain a long-term and reliable energy provider to the world.”

Some of the blocks already have discoveries and, within the combined geographical area of the second bid round blocks, there are 290 targeted reservoirs from 92 prospects and leads.

Adnoc has established a dedicated website where the company provides information on the blocks as well as a portal where interested bidders can register to participate, subject to a strict prequalification process undertaken by Adnoc.

The website also contains details of a roadshow, to be held in Abu Dhabi, in which technical and commercial information on the new blocks will be provided.

After the roadshow, bidders will confirm their participation through an Expression of Interest and will be able to access a comprehensive data package on the five new blocks. The data package will include full bidding instructions and regional geological information, in addition to well and seismic data, in both raw and interpreted form, on all five blocks.

The Sharjah Chamber of Commerce, SCCI, has recently revealed the activation of online attestation services for all transactions through the chamber’s website or the smart application instead of coming in person to the customer happiness centres.

Etisalat on Saturday announced it is expanding its CloudTalk Meeting by enabling 50 concurrent participants to join an online meeting and discussion, in response to the high volume of requests and growing demand for the service.