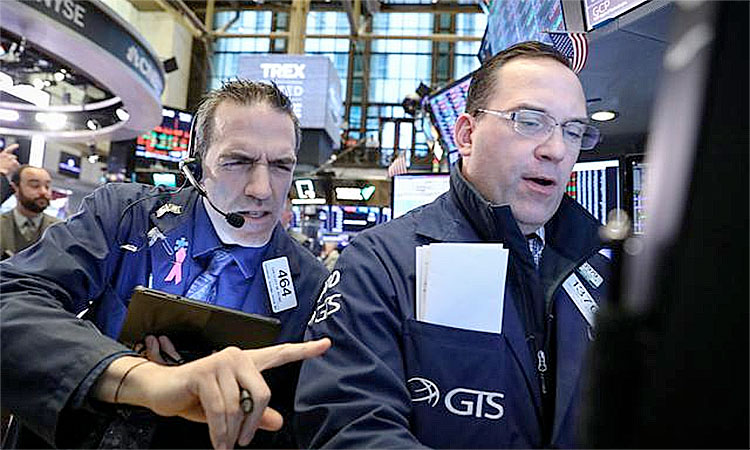 Traders work on the floor at the New York Stock Exchange (NYSE) in New York. Reuters.

US stocks were lower on Monday, following the S&P 500’s seven-day winning streak, as Boeing fell and investors braced for what could be the first decline in corporate earnings since 2016.

Shares of Boeing Co slid 4.1%, pulling down Dow industrials and the S&P industrials sector, after the company said it would cut production of its 737 MAX aircraft by nearly 20%.

The sector, which weighed the most on the S&P 500, was also pressured by General Electric Co›s 7.09% fall after J.P.Morgan downgraded the conglomerate›s shares to «underweight».

The recent run of gains in US stocks has taken the S&P 500 within striking distance of its record closing high hit in September, lifted by the Federal Reserve›s decision to hold off on interest rate hikes in 2019 and on hopes of a trade deal with China.

However, lowered earnings expectations and worries about an economic slowdown are starting to dampen investor enthusiasm.

Major banks are slated to kick off first-quarter earnings season later in the week and analysts expect a 2.3 per cent fall in S&P 500 earnings, according to Refinitiv data.

«This is mostly a wait-and-see approach by investors before the next batch of corporate earnings or macro data comes out,» said Lisa Erickson, head of traditional investment at US Bank Wealth Management in Minneapolis, Minnesota.

“We›re cautious but constructive on earnings, because of the bar being lowered so much and we have seen a plateau in economic data in the back drop of lower interest rates, which is at least providing for companies to do better than expectations.” The S&P 500 is trading 16.7 times its next 12-month earnings estimate, up from 14.6 times during the peak of December sell-off but below the 17.3 times at its record high hit in late September.

Nine of the 11 major S&P sectors were lower. Energy stocks, among a few bright spots, posted a 0.15% rise as oil prices hit a five-month high.

Symantec Corp jumped 6.92% after a report that Goldman Sachs raised its rating on the cyber security firm›s stock to “buy” from «neutral».

Procter & Gamble Co climbed 1.08% after Wells Fargo raised its rating on the company›s shares to «outperform” from «market perform».

The S&P index recorded 20 new 52-week highs and no new low, while the Nasdaq recorded 41 new highs and 18 new lows.

Meanwhile, european stock markets gave up early gains on Monday to close mostly lower, dragged down by US markets worried about trade talks and the upcoming earnings season, analysts said. The British pound was volatile as investors weighed the risks of another Brexit-themed week, with many willing to bet money on another, perhaps long extension to proceedings, while others think a hard crash out of the EU is not off the table.

In stock trading, Frankfurt came under pressure from the get-go after poor German data, and other eurozone equity markets soon followed suit, feeling the pressure from negative sentiment across the Atlantic.

“US stocks are lower in early action, with the markets seeming to look past Friday’s upbeat labour report and focus on uncertainty regarding a US-China trade deal and this week›s unofficial start to Q1 earnings season,» analysts at the Charles Schwab brokerage said.

Dow member Boeing fell nearly four per cent after slashing its production schedule for the embattled 737 line from 52 planes per month to 42 following the grounding of the 737 MAX after two crashes.

London, however, managed to eke out a small closing gain as the pound pulled back from the day’s highs.

German data showing falling imports and exports in February spoiled the Monday mood in the eurozone and added to concerns about the health of the eurozone›s biggest, and heavily trade-dependent, economy.

IG analyst Joshua Mahony called the date “sagging” and said that «with both exports and imports falling for the European powerhouse, a worsening picture becomes apparent for the eurozone flagship economy.”

Asian indices traded mixed but investors remain broadly upbeat after a strong US jobs report that eased concerns about the world›s top economy.