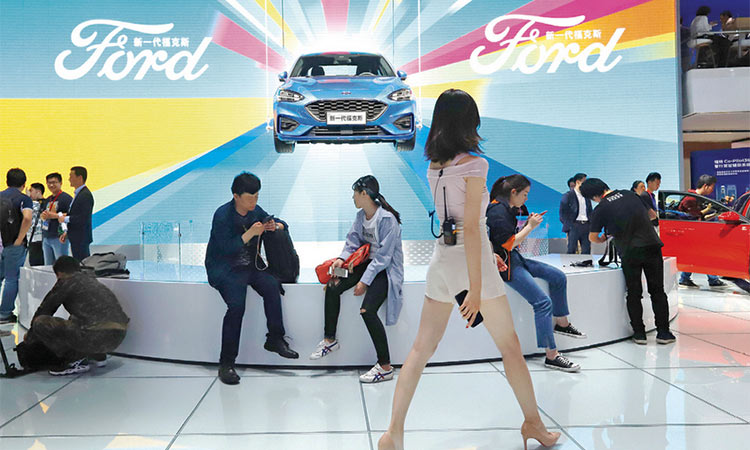 Visitors at the Ford booth during the Auto China 2018 show held in Beijing, China. Associated Press

China has suspended additional tariffs on some US goods that were meant to be implemented on Dec. 15, the State Council’s customs tariff commission said on Sunday, after the world’s two largest economies agreed a “phase one” trade deal on Friday.

The deal, rumours and leaks over which have gyrated world markets for months, reduces some US tariffs in exchange for what US officials said would be a big jump in Chinese purchases of American farm products and other goods.

China’s retaliatory tariffs, which were due to take effect on Dec. 15, were meant to target goods ranging from corn and wheat to US made vehicles and auto parts.

Other Chinese tariffs that had already been implemented on US goods would be left in place, the commission said in a statement issued on the websites of government departments including China’s finance ministry. “China hopes, on the basis of equality and mutual respect, to work with the United States, to properly resolve each other’s core concerns and promote the stable development of US-China economic and trade relations,” it added.

Beijing has agreed to import at least $200 billion in additional US goods and services over the next two years on top of the amount it purchased in 2017, the top US trade negotiator said Friday.

A statement issued by the United States Trade Representative also on Friday said the United States would leave in place 25% tariffs on $250 billion worth of Chinese goods. (Reporting by Brenda Goh and Steven Bian. Editing by Lincoln Feast.) US, China mini-deal offers ‘breathing space’ for Chinese economy Beijing, Dec 15, 2019 (AFP) - A truce in the US-China trade war offers Xi Jinping breathing space as he faces a slowing economy and political trouble in Hong Kong, but experts warn 2020 will be another tough year for the Chinese president.

The pared-down “phase one” deal announced Friday includes a reduction in US tariffs on China, in exchange for an increase in Chinese purchases of US goods and better protections for intellectual property.

But tussles over the most controversial Chinese trade practices − including steep state subsidies − have been left to future talks.

The trade war launched nearly two years ago by President Donald Trump isn’t over, analysts say, as there’s always the risk of Beijing not upholding its end of the bargain and the mercurial US leader throwing more tariff bombs.

The mini-deal is a “delay tactic to buy the Chinese Communist Party breathing space and allow it to stay in the game against overwhelming odds,” said Larry Ong, senior analyst with risk consultancy SinoInsider.

Growth of the Chinese economy slowed to six per cent in the third quarter − its most sluggish rate in nearly three decades − as demand for exports cooled and Chinese consumers tightened their belts.

In November exports fell 1.1 per cent from a year earlier, the fourth straight fall, and exports to the US nosedived 23 per cent as the trade war disrupted supply chains and left investors on edge.

Trump has cancelled a new round of tariffs that had been due to kick in on Sunday and would have affected smartphones, toys and laptops among other goods, while Beijing also called off levies planned in retaliation.

In another major concession, Washington will also slash in half the 15-percent tariffs imposed on $120 billion in Chinese goods, like clothing, that were imposed on September 1.

However, this “unexpected” tariff rollback will only have a “marginal” impact on China’s economy, said Lu Ting of Nomura bank.

“The worst is not yet over and 2020 looks set to be yet another tough year.” - ‘Different interpretations’ - On the political front, Washington’s decision to back the pro-democracy movement in Hong Kong and to criticise China’s mass detention of mostly Muslim minorities has cast a shadow over trade negotiations.

Xi has faced six months of increasingly violent demonstrations in Hong Kong, while on the other side of the world Trump is facing a congressional vote on impeachment for abuse of office next week.

And with Trump’s 2020 reelection campaign gathering pace, he needs to show voters that his habit of starting bruising trade wars is bearing fruit.

Barry Naughton, an expert on China’s economy at the University of California in San Diego, said the mini-deal − which caused US stocks to whipsaw − may have been announced too soon.

“People worry that both sides were under so much time pressure to conclude something before Sunday, that they may have once again prematurely announced an agreement,” he told AFP.

US Trade Representative Robert Lighthizer said he expected the deal to be signed in early January, taking effect 30 days later.

US officials also said China has promised to import $200 billion worth of US goods − including farm produce, energy and services − over the next two years, but China declined to offer any details.

“Different interpretations of what has been agreed upon are potential obstacles to completing the deal,” Lu from Nomura said.

Trump said existing tariffs of 25 per cent on $250 billion of Chinese imports would stay in place pending further negotiations on a second-phase deal.

Although he tweeted Friday that talks will start “immediately”, the Chinese side are treading more cautiously.