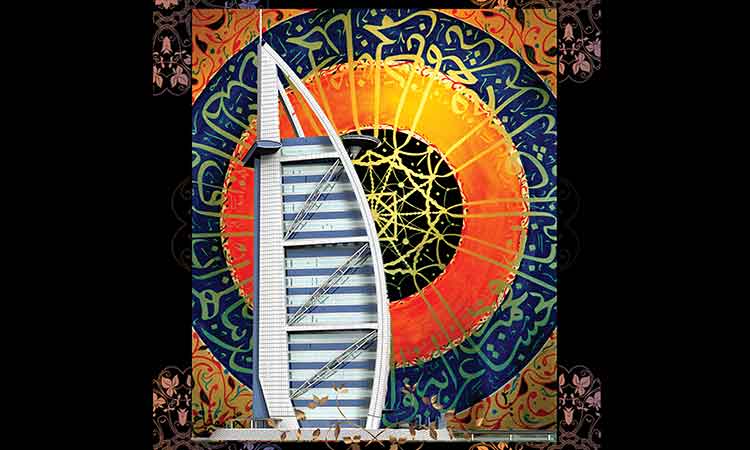 German author Monica Mergiu has sent “warm regards from cold Germany” to Gulf Today. A writer who has penned innumerable words on the UAE in books and articles, her volume Royals & Artists: Emirati Women of the Golden Era, is part of the Women and Art collection of interviews, of some of the “most important Arab women of our times,” she says. “I’m writing about women on their journey to self-discovery. Not always self-confident but for sure very much convinced about their role in family life, professional life and social life.”

Wedad Al Kaabi is a Founder Member of The Arts Club Dubai and the Capital Club Dubai. She is an interior designer who also designs jewellery. She produces only limited editions jewellery, since she creates them “just for the ones ready to understand our Emirati heritage and our own Spirituality.”

Abu Dhabi born Sumayyah Al Suwaidi is of course a well-known figure in UAE art circles. For Mergiu, Al Suwaidi’s art “reinvents forms, colours, structure and personalities.” Dr. Huda Al Habib is a therapist — a soul doctor, according to Mergiu, since Al Habib provides medical care for the soul. Practicing in a “green” ambience, her office graced with plants and flowers, the doctor emphasises that “health isn’t just about medicines, medicaments or chemical treatment — it is about our ability to see where we are, what we are facing.”

For her, clients are not patients but friends. She uses ancient wisdom from books, bio and herbal products and relies on “natural nurture” in her role as healer. Fatma Lootah is an Emirati artist based in Verona, Italy. “After living all those years between Dubai and Verona,” Mergiu says, “Fatma Lootah is nothing more and nothing less than an oriental with the flavour of canzonetta and an Italian with the mystery of sand dunes … her paintings charm precisely by this blend of Orient and the Occident …” 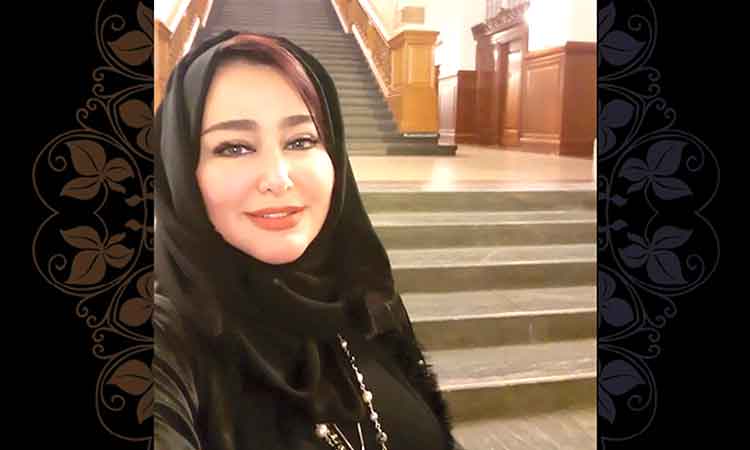 “I am a soul in search of light through Art,” says the artist. “I try to describe the atmosphere of happiness despite the sad wars and desperate moments of other nations.” Mergiu reproduces a poem by Lootah which describes a woman as being “stubbornly patient as a palm tree/stubbornly patient as a camel/travelling through the hills of life.”

Mariam Al Shemmari is an Emirati perfumer. “Meeting Mariam is like being in the middle of a forest with millions of flavours, fragrances and scents,” Mergiu exclaims. With Emirati inspirations in the heart and European standards in her hands, Al Shemmari “deals with the scents and sense of elegance”. Noura Al Noman is the first author of science fiction literature from the UAE. “She writes SF,” says Mergiu, “which is anyway absolutely unusual in the Arabic language.” However, Al Noman cautions that though her fiction is written in Arabic, it is not exclusively “Arab”. “It takes place on other planets where ethnicities and even religions are unspecified.

“In fact, I had made sure there is no mention of Earth, Arabs and Islam in my fiction, in an effort to avoid the debates which could arise from the themes and contents.” Though she has many favourite writers, she draws most from Anne MCaffrey. “The striking feature,” says Al Noman, “is the diversity and multi-ethnic worlds she has created, and the harmony between them all.” Rather like the UAE, isn’t it?

Hind Bin Naiser is the owner of the first Emirati cosmetic brand: when the book was being written, Bin Naiser was on the cusp of introducing her products to the European market.

Hana Alhai, according to Mergiu, is “a mixture of ancient Egypt and modern Emirati” as a fashion designer. She owns the Pearl Haute Couture salon in Dubai. It is filled with flowers, multi-coloured orchids, perfumes with Oriental flavours and oils with mysterious names, brilliant kaftans of silk, long dresses in a marvellous eventail form, golden coffee tables with delicious Arabic sweets and traditional dates – they remind the author of old, royal Alexandria, the Cairo of Naguib Mahfouz and Khan el-Khalili, the famous bazaar and souq in the historic centre of Cairo, established as a centre of trade in the Mamluk era. “What is marvellous is the fact that all this happens in the middle of cosmopolitan Dubai!” says Mergiu.

Dr. Noora Al Marzooqi is an anchor, media presenter in Dubai Media City, spokesperson in international events, a trained dentist and Founder and Owner of Opera Art Production. If this CV was not long enough, here is more: she is also involved in education and charity events. “A real inspiration for many young girls and a visionary person, giving a sense of purpose to the new Emirati generation,” Mergiu concludes.

Shaima Al Habsi, the book notes, is a successful life coach, motivational speaker and an analyst specialised in Economy, Climate and Energy. “Being a young woman with a beautiful career in so many different fields makes Shaima the perfect example of the new generation of Emirati women dedicated to their roots, origins and identity, walking the long journey to self-definition,” Mergiu says. Royals & Artists is illustrated by the photographs of Tunisian-French painter Raouf Meftah, who has been awarded by UNESCO for his calligraphy. 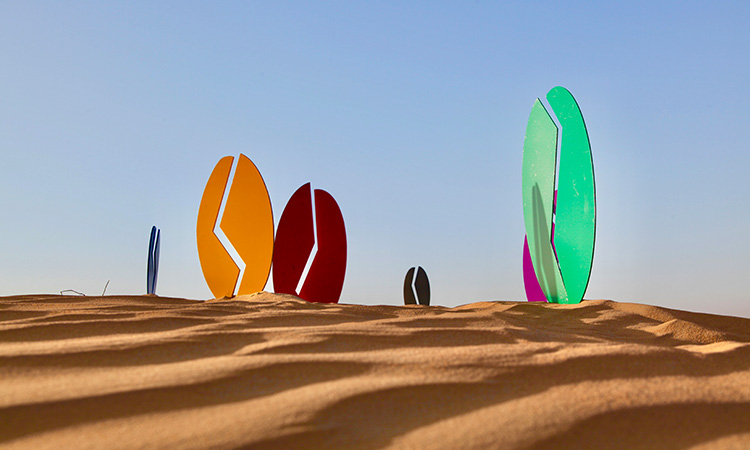 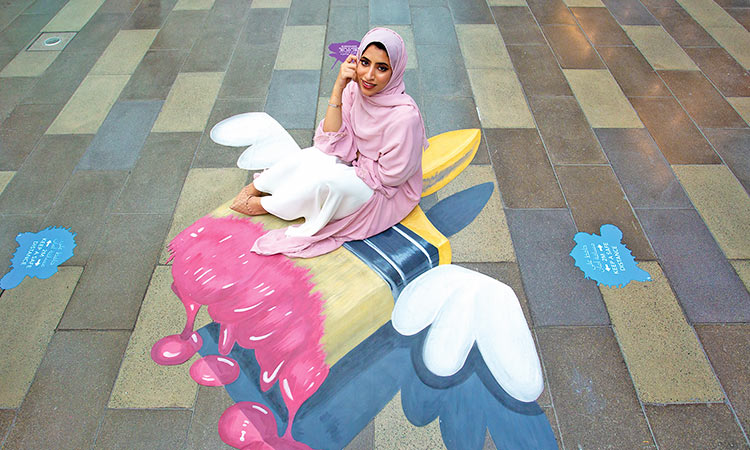 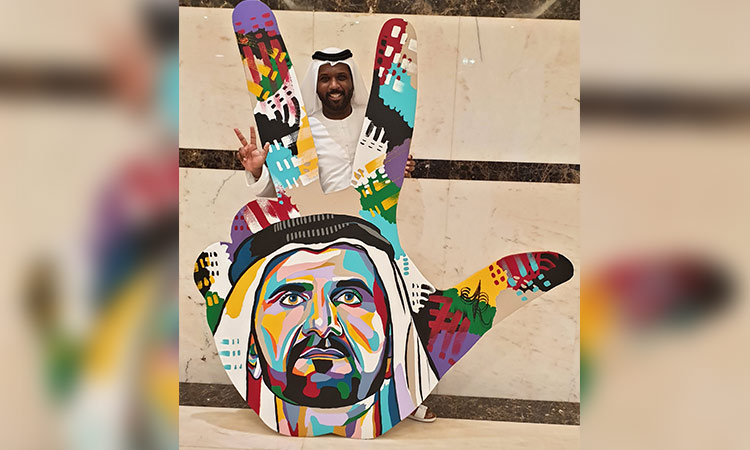