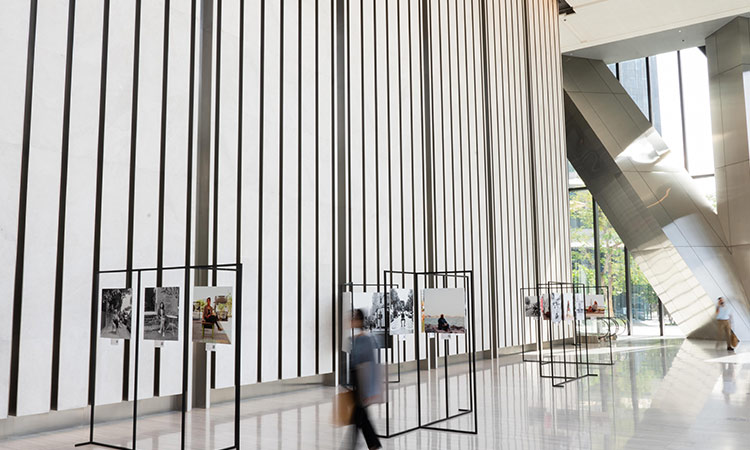 Waiting for Time is a comprehensive show of Nabeel’s long-running series of portraits. More than sixty subjects were interviewed and photographed for the project internationally, resulting in the curated overview of twenty-nine stories and photos. Intersecting Realities is his seventh solo show.

Armed with a 1960s medium-format Hasselblad and Mamiya 7 camera, Nabeel travelled from London to Berlin to Dubai from 2020 to 2022, recording and interviewing individuals from all walks of life - from playwrights and comedians to hospital workers, journalists and lawyers - on their recent experiences.

The one-on-one human moments captured outside in a place of the subject’s choosing, encapsulate intimate, individual experiences as well as common threads, highlighting both the great disparities and commonalities between people in today’s world.

While his work is a glimpse into a reality situated in the past, it also sheds light on the many commonalities converging to create a brighter, more optimistic present.

“What began as a study of perception versus reality in a time of a global pandemic has turned into a collection of intersecting stories of (extra)ordinary people living a shared reality – a reality no one had predicted,” said Nabeel.

“As we were learning to live with Covid-19 and its variants, I had the opportunity, almost like an epilogue, to photograph and interview residents of Dubai.

“Thus, the project, now known as Intersecting Realities, was completed. This exhibition is the culmination of almost two years’ worth of efforts in documenting the stories of these people and sharing their individual experiences in these extraordinary times.” 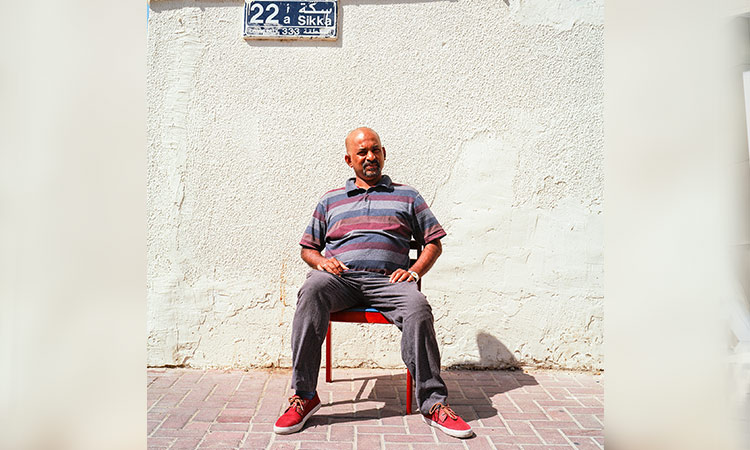 Yamam Nabeel captures Anthoni (John) Yallamilli, who is a tailor in Dubai.

Commenting on the exhibition, Rob Devereux, CEO of ICD Brookfield said: “Yamam Nabeel’s images and stories remind us that though we can feel most isolated when faced with the real and existential losses and stresses of the past years, we are not alone.

“These are human feelings and experiences, felt profoundly and individually, but also lived the world-over. We are thrilled to be presenting this work at ICD Brookfield Place to the diverse Dubai community, with whom we know it will resonate.”

Based in London, born in Iraq and brought up in Hungary, Nabeel has led a peripatetic life. He has been living in London since 1992.

“I was born in Baghdad, where my dreams and memories will always be safe, where my roots will always be calling me home. I was brought up in Budapest, the city that shaped me, that gave me knowledge and culture, the city of my youth; my second home.

“I was 16 when my family and I moved to London, this great metropolis that gave me a safe and stable home, but it has also lit the fire that keeps asking about the meaning of home and belonging.”

Nabeel’s family went into exile in 1980 and spent the following 18 months living in France, East Germany, Syria, Lebanon and Czechoslovakia before settling in Hungary in 1981, and moving to the UK in 1992.

He was educated in Hungary and the UK and began writing short stories in Hungarian at age 16; the stories were translated into Arabic and published in Al Hayat, Al Quds Al Arabi and Sharq Alawsat, to critical acclaim.

He went on to work for MBC (Middle East Broadcasting Centre), as a segment producer before moving on to continue as an independent producer, creating content that syndicated internationally for the likes of CNN, Channel 4 in the UK, Sky Sports and Sky News.

In 2003, he set up FC Unity, an award-winning NGO with a mission to combat violence, extremism and racism through sport and education, with large scale programmes delivered in Iraq, Afghanistan, UK, Ghana, Sudan, Somalia, Sierra Leone and Djibouti.

Since 2017, he has been focusing on telling stories, through phototherapy and writing, of those whose stories may never be told.

Perhaps he is well suited to be a story teller, since, according to him, “I am the eternal outsider, always looking in, observing the stories of those whose stories have been muted.”

ICD Brookfield Place Arts programme creates community and aesthetic opportunity through the transformative power of the arts. Hailed as a vibrant and open initiative, it seeks to engage and welcome everyone, inside and outside the walls, “with the belief that having arts and culture in daily life positively impacts wellbeing.”

ICD Brookfield Place Arts is also considered a gateway for discovery and support for local and regional talent, offering visibility to emerging artists and more established creative practitioners through an array of year-round programming – from exhibitions and installations, to live music sessions, classes, workshops and conversations.

A collaborative commissioning and programming platform, participating artists and groups are selected for the relevance of their work and practice to the local community. Another aspect is that ICD Brookfield Place Arts draws upon arts and culture as a foundational pillar for Brookfield Properties globally. Raising market standards in all aspects of the workplace environment, the programme is at the heart of a new model that champions the potential of arts and culture to enrich, inform and transform the daily lives of tenants, the community of Dubai, besides global partners.