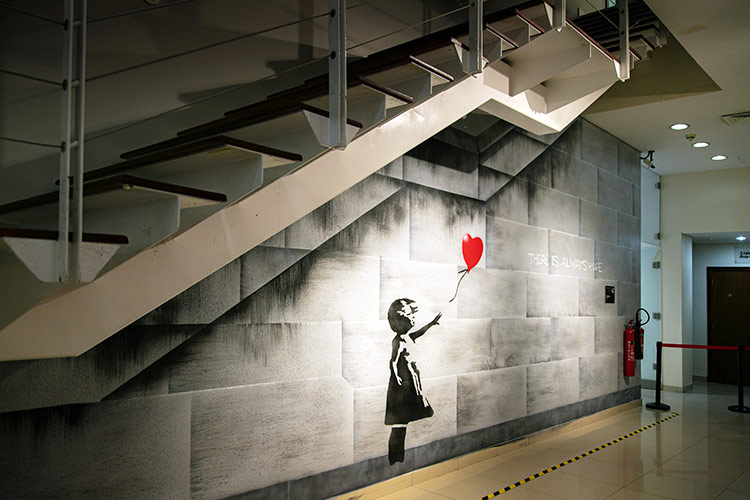 The World of Banksy exhibition, organised by the Mall of the Emirates in partnership with Dubai Culture and Arts Authority (Dubai Culture) under the supervision by Vardar Entertainment, continues to provide a rich viewing experience for art lovers, connoisseurs, curious discoverers and Banksy fans of all ages.

The exhibition, the first of its kind (Apr. 5 - June 30), is dedicated to the world-famous street artist and shows over 100 of his works across 1,500 square metres in the Art Centre at the Mall of the Emirates, which has been entirely refurbished and dedicated to the immersive event.

Banksy is the name of a mysterious artist whose graffiti art and poetic stencils cover walls in major cities and capitals of the world, and the retrospective of graphic murals enables visitors to rediscover famous works of art such as Girl with Balloon, The Flower Thrower and Mobile Lovers, among others. Banksy’s Girl with Balloon is perhaps as recognisable as the street artist is mysterious. It has appeared on walls, in prints, online, and even on the arm of a celebrity singer. It was first created in London in 2002 — the work was originally stencilled on the walls under Waterloo Bridge at London’s Southbank. Another version appeared in Shoreditch, East London, on the walls of a printing shop. Both stencils are now lost - but the image lives on.

The original stencil at Southbank was accompanied by a quote that read “There Is Always Hope”. Some people interpret Girl with Balloon as a symbol of lost innocence, while others believe the girl is setting the balloon free — either way, Banksy reminds the viewer to hold on to hope, even when it feels out of reach. The work depicts a young girl, whose hair and dress are blowing in the wind, reaching for, or releasing, a red, heart-shaped balloon that has slipped from her grasp. The gesture and the red balloon, a symbol of childhood and freedom, present a powerful message that can be read in a number of ways. Whether you see the girl as losing the balloon, or about to catch it, the meaning can be interpreted as a loss of innocence or the arrival of new hope and love.

Banksy has also created variations of Girl with Balloon to address political issues. In 2014, he created a version featuring the girl wearing a headscarf, to support victims of the Syria conflict. The Flower Thrower is one of the most iconic stencils by Banksy. It shows a masked Palestinian throwing a bouquet of flowers. Banksy painted the work on the 760 kilometres wall that separates Israel from Palestine. The facial expression and the man’s posture in the mural suggest violent intent. 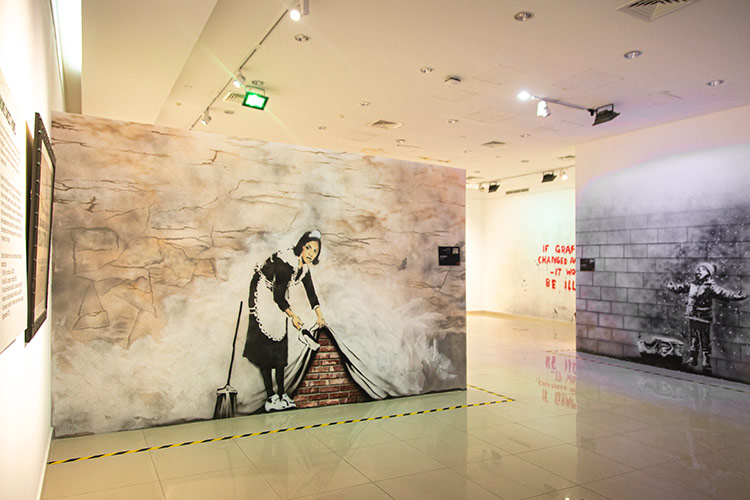 A Banksy composition titled Sweeping it Under the Carpet.

However, by substituting a rock, or a Molotov cocktail or a bomb with a bouquet, Banksy advocates peace instead of violence. The location itself adds prominence to the message. Banksy is a known pacifist and is anti-war. Mobile Lovers was created in 2014 in Banksy’s hometown of Bristol, and conveys the message of the importance of living in the moment. Today, people are consumed by technology and live their lives through their phones. But living through a phone deprives them of making real life connections. In Mobile Lovers, Banksy apparently feels that people spend too much time on their phones and also on social media, and are not giving quality time even to people they care about. The couple in the artwork act as though they are paying attention to each other, but their attention is actually focused on their phones.

With over 500,000 visitors in five major cities in Europe (Paris, Barcelona, Prague, Milano and Brussels), The World of Banksy is being held in Dubai for three months, with possible extensions. Since its launch, the exhibition continues to attract visitors. It is in line the Authority’s vision to strengthen Dubai’s position as a global centre for culture, an incubator for creativity and a thriving hub for talent. Representing a first for the global event, external participants, comprising four young graduates in fine and visual arts, will also be displaying their work as part of the exhibition.

“Banksy” is the pseudonym for a UK-based street artist, political activist and film director, whose real name and identity remain unconfirmed and the subject of speculation.

Active since the 1990s, his satirical street art and subversive epigrams combine dark humour with graffiti executed in a distinctive, stenciling technique. His works of political and social commentary have appeared on streets, walls and bridges throughout the world. Banksy’s work grew out of the Bristol underground scene, which involved collaborations between artists and musicians. He has said that he was inspired by 3D, a graffiti artist and founding member of the musical group, Massive Attack.

He displays his art on publicly visible surfaces such as walls and self-built physical prop pieces.

A photography exhibition will also be hosted alongside the exhibition in Dubai. Well-known Belgian photographer, Philippe Bernaerts, will be presenting a series of documentary pictures about street and city atmospheres. The series will be presented for the first time as a collection providing visitors with a journey from one city to another, allowing the viewer to get impressions of city life across the world. Moreover, as a premiere, Bernaerts will be working on a photography project dedicated to Dubai, also being shown for the first time during the exhibition.